(Genoese Crossbowman and Elite Genoese Crossbowman’s advantage towards infantry is not working. A test was done with Italians vs Persians on Post Imp to test damages of genoese vs various units. When it got to infantry, there was no advantage as should be towards infantry. We further tested and the issue seems to be on the genoese side, as they are also doing a flat 1 damage vs elite huskarls as well, which an infantry type that they should have an advantage against. This could also simply be an error in the text.) 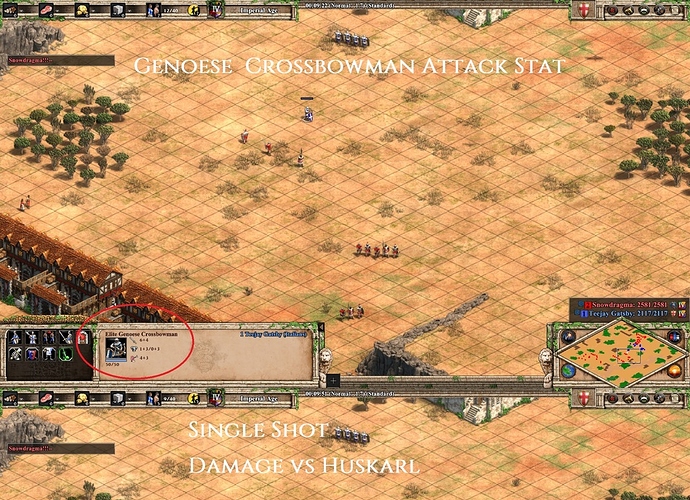 The Genoese Crossbowman doesn’t actually have an attack bonus against infantry, it only says it is strong versus them due to being an archer. Its real attack bonus is about hitting Cavalry. +5 to Cav when Castle Age, +7 to Cav when Elite.

That was my initial thought too, but the description would then seem extremely misleading. It’s not strong vs infantry if they are armored up, so the statement “Strong vs cavalry and infantry…” on the same line makes it seem like there’s a bonus towards both? Given “huskarls” are infantry, I would not say the genoese are strong vs them, nor any fast moving infantry then. But a heavily armored paladin they can wreck. If the intent of the unit though was only to have an attack bonus vs cavalry and not infantry, that’s good to know

Every archer unit has the description of “strong vs Infantry”, without necessary having a bonus vs them. Because it’s the case, archers counter Infantry in general quite well.

Only a couple of Infantry units such as huskarls and eagles can flip the counter around, but it should be by no way a generalization.