Hi all! for long ago i´ve been thinking about germany and the several points in wich i consider they should be performing better, i wanted to post this before the germany “rework” if there will be any…

Anyway i thought this through and i´m just gonna put the changes i´ve been thinking about without justifying them because although all this changes are made by justification, it would make this way longer than it probably should be, and even then i think i could not explain everything as i see it, but i hope to explain it as well as i can in the comments, so if you have any doubt, complain, insult if you may, or piece of knowledge, experience, etc. that you would want to share, please, you are all welcome! (I also wanted to say that all changes are aimed more at the late game, rather than early game)

First, one of the most central points in germany, the uhlan. I´ve thought of 2 possible things for this unit:
The first is like my dream change to this unit, just because is on pair with germany´s identity and comes smooth with every other mechanic of germay in my opinion; although i don´t think this is probably the best option, first because it would change the uhlan´s identity quite much wich i never like to do although if the community is down to i´m also down to, but probably not because i would admit that is a little OP, mind you, i´ve made the calculations so it would be very very strong although not OP, less OP than TAD Gendarme, but anyway, i wasn´t gonna add this version but just to not keep it, i share it:

Logistician changes:
Now it increases the number of uhlans granted by 1 in all ages rather than only in AGE I and AGE II. The arsenal now grants the advanced arsenal card. (Advanced arsenal card is not removed).
AGE I = 1 —> 1
AGE II = 3 —> 2
AGE III = 3 —> 3
AGE IV = 4 —> 4
With this, the logistician not only would be more valuable because the increase is +210 rather than +150, but also its usage would extent to more strategies rather than just an age II intensive play, also, the age I cards would grant not that much less than age II shipments (1-2) like they currently grant (1-3).

Now, the above changes are a little over the board, so forget them, the next changes are my real suggestions for the whole civ:

War Wagon now get +20% in Fortress Age
This change is not necessary, but i think WW are a bit underwhelming to be a german unit, and we´ve seen before units like the cuirassier getting the +20% when they previously didn´t, also that almost all light cavalry gets that +20%

Hand Infantry Hitpoints/Attack/Combat =
Pikeman/Doppelsoldner +15% HP/ATK/HP&ATK
—> Pikeman/Crossbowman/Doppelsoldner/Skirmisher +15% HP/ATK/HP&ATK
The card affecting the Pike and Xbow is not necessary, i include them to make germany a little less dependant of it´s age 3, and mostly because granting that to that units is almost nothing since you won´t be using them outside of age 2 but whatever, the main point is that it should affect the skirmisher, like the dutch cards.

Treaty of Westphalia (Zweihander)
Requirements = Age IV/2000C💰
12 Doppelsoldner/Doppelsoldner +10% hitpoints
—> 10 Doppelsoldner/Doppelsoldner +20% attack
Honestly, this i didn´t plan to include, i would even remove any stat buff to not make dopps having too much hitpoints, but the +10% can stay, or i would argue that is better the +20% on attack because it makes it even more dependant on attack so it´s less OP that way but can go either way. If it´s the +20% is 75 melee damage, if it´s nothing is 70, originally i thought 70.

Siege Attack = 60💥 —> 70💥 3.00⚡ (This change is not necessary, just to adjust a little with the new attack)
Melee Attack = 20🗡️ 3.00x🐴 2.25x🏃 —> 25🗡️ 2.25x🐴 1.75x🏃 2.00⭕ 1.50⚡
This is probably the change i would like the most to be changed, i think the doppelsoldner could really use some buff, and the main one is their attack, making it a little more of a swordsman and less of a pike, more like a samurai, or like a halberdier but a bit better, but this is one of the main things, and in fact, i was going to write the “Hand infantry buff” toopic before this, that is making adjustments like this one, but i bring this one up earlier because germany may be changed soon…

SO THEIR IMPORTANT MILITARY UNITS IN BASE STATS AND IN FULLY CARDED STATS WOULD LOOK SOMETHING LIKE THIS:

The only one i might admit is a bit over the board is the skirmisher, and their attack was intended but their hp was not, although i think the age IV card is fine as it is, and actually, for reference, it would be the only european skirmisher that could win against a cassador, although cassador cost much less so cassador wins at the end, but i understand that hp is quite high…

For final note, i do know that you will be going to think i´m crazy and that “this is too OP” and too irracional, etc. i know that just seeing those buffs might sound crazy to buff a civ that´s currently strong and kind of balanced, but honestly, although they always have been strong, germany´s identity is the highest (and most expensive) quality units and one of the finnest economies also; and even with all this, their eco with the same villager population as french is even a bit less eco than the current french, so french is actually more OP in terms of eco, also french would even then have better artillery, better hand cavalry, and more variety of units, so my idea is to make germany in treaty as strong as french in treaty, because honestly that should have been since day one, those should be the of the strongest civs of all… Also, if i didn´t mentioned it, my buffs and all the intended changes are meant to be TREATY changes.

THANKS A LOT FOR THE ATTENTION AND THE REPLIES BEFOREHAND!! I POST THIS TO KNOW WHAT THE COMMUNITY´S POSITION ON GERMANY IS, HAVE A GREAT DAY

I will insert a few polls to make this easier i believe, but it´s my first time, if you think it´s not helping and it´s better without them i remove them if i can.

why not make a new civ with these changes.

giving uhlan melee resist will probably just make germany into an age 2 rush civ (though with a very bad match up vs musks) since they will always wins cav fight and give them enough HP to fight against pikes.

Yeah thinking about this they will just outright die to any musk civ with these changes.

in what world do uhlans and war wagons need buffs.

Ohhh sorry, i didn’t see they had the sword icon hehehe my bad, that’s not changed, just their normal range resist, but thanks also for letting me know

Dude, you need to stop using drugs. No offense

Uhlans don’t NEED buffs like they are sole kind of bad unit, although there are some top treaty players that see uhlans like bad units, i’m of the ones that say that uhlans are pretty great, maybe even better than all hussars, but it do not compare with cossacks, gendarmes or some other strong cav unit, it doesnt even win against the hussar, but just because is a little cheaper it’s ok. But whatever, my point is that they may not need a buff that badly, but they can use one, and mainly it’s not because of the unit in itself that i think about this, but because the age IV card wich is not really worth it, in age III you have the exact same card but it also affects WW and all cavalry, so i don’t see the point in an age IV card with only +15% that only affects 1 unit, it’s almost like the Otontin Slinger card in age IV, is +10%.

For the WW as i said in the topic, its not necessary, also because they don’t need a buff, although if you compare them with cav archers, wich are not even like javelin riders or ERK so you can’t tell me cav archers are OP, they are just very strong, so cav archers, population wise, have the same attack and dps, although Cav A deal damage better because they get less overkill, also that WW have a delay when shooting, and the only thing WW have is like 13% more HP, but Cav A have more melee resist, and are waaayyy cheaper, they almost cost half the WW cost, when WW should cost only +50% so if WW costed just +50% more than Cav A i understand it, but they cost like +95% and it’s fine because German units are expensive but they are still the same as the way cheaper Cav Archers. I will say i don’t use light cav that much so i don’t really care much hahaha

But they taste so good

The only thing I would change about the Germans would be to give them some way to get modern units from the moment they reach the Fortress Age, it’s very strange especially in late games to see Doppelsoldner fighting alongside Needle Guns.

Yes, I notice that the Germans need a buff especially the Uhlans and the war wagons, in this way my 1v1 will become more feasible and playable

Well you got one, well played.

The german Buff is the german rework that is coming

I think the new winged cavalry card is very weak, it is recommended to increase from 6 to 7 or 8 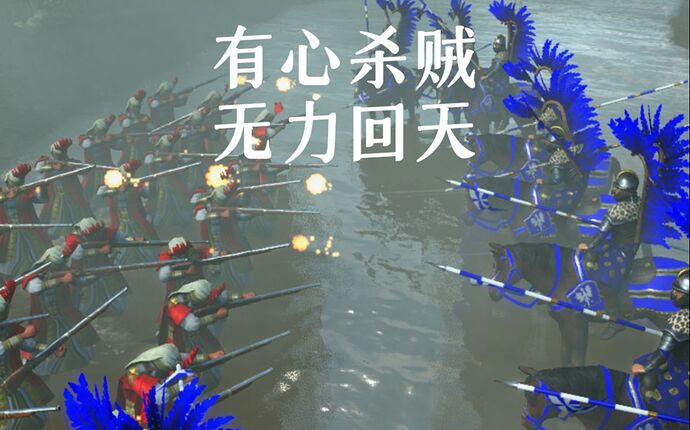 And allow to train them in forts