remember the Ger cons researches the card. The card is the value of the card which other civs have access to. 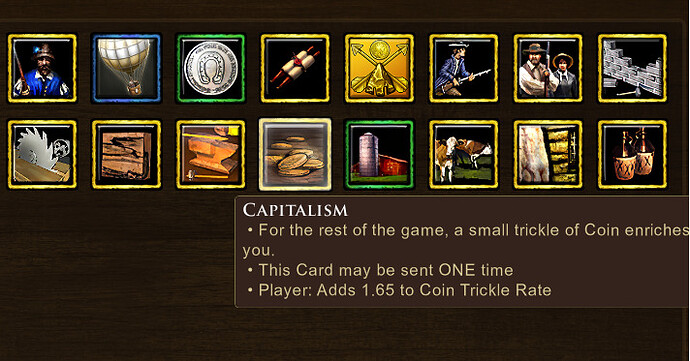 Didn’t they respond already saying that its an intended balance thing?

well its not as the card captialsm is 1.65c/s for all civs. and thegerman cons tech is to research capitialism. hence it was not intended to leave it at 1.25c/s especially as capitalism is a fortress age cons tech if i remember correctly

china already has 1 of the strongest, if not THE strongest, ecos in the game, there is no reason for them to boost this 1, esp considering you dont need to use a HC card slot.

but it is INCONSISTENT.
then they should name it “minor capitalism” or communism (because we all know capitalism > communism).

There are many techs and cards with same name and different effects in the game.

then it just goes back to the question of why capitalism was buffed in the first place it didnt need to be. The game needs to reduce on these inconsistencies.

Capitalism may have needed a buff, china with a coin trickle is a different matter I think.

So they don’t update capitalism for China supposedly because it breaks treaty balance but they update Dutch church xp trickle for Japan in October PUP?

This card’s tricke is ok, it is in this way by design. Thanks for your report!

because japans eco aint that good? like wow 6 exp a minute, that will really matter.

Same could be said about 24 gold a minute, and even if you multiply that by a full 60 min, since the reason quoted from devs to not update it, is that it interferes with treaty balance, I’m pretty sure that having that extra 1,440 gold won’t be the reason you lose or win (as opposed to a change in a unit’s stats or cost like with the new Inca changes for eg).

Regarding that 6 exp a min, you might be surprised to know that there is a civ that can only access to 9 exp per second alternative income, so these changes probably matter even more to treaty given that it could mean getting an eco card earlier and the % of that card can be applied to max villagers gather rate times the time saved. It might even be more impactful if it means getting a good military upgrade card earlier that allows you to get the edge you needed in battle in that moment.

Now even then I think that it is totally okay for Japan to get their church updated to real current real church value, because I don’t think that it will necessarily influence treaty balance that much really, but I think that the same is true for German consulate coin trickle.

for Japan this is about consistency, there is no real reason why their church doesnt follow normal experience rules and this as is indicated by “fix” was probably an oversight.

Chinas gold trickle is not comparable at all, usually if you want to use that as a faction you have to pull out a card and use a shipment to receive the benefit, which by that point its a trade off, for china this isn’t a trade off, the only question is how quickly you gather export to use the tech and then it gives you free gold for the rest of the game, in the strongest economy in the game already. capitalisme needed a buff because it was pretty much never taken and seen as a wasted slot, Chinese coin didn’t need it because it has no downsides, like this isn’t something you can simply call “consistency” because it is a straight upgrade.

Idk where you got those numbers from, I’ve heard pro treaty player Floko saying that Japan is the strongest civ in treaty in his opinion. Either way the question is not if China is good in treaty but if that little extra trickle will make a difference in win rates for China in treaty, because it could really use it in supremacy but they won’t change it just because of this reason.

I’ve provided you numbers and yet I don’t feel that you have addressed any of those arguments. Do you think that 1,440 gold in most cases can define a treaty match?

i mean just from the face of it 1.4k gold is a drop in the bucket. thats only slightly more then half a silver mine and like equal to 24 vils gathering gold for one minute on rice paddies with all upgrade. its worth nothing.

its a quarter of a villager, but has to be seen in the context that you also get food and wood trickles and 2 factories and cow eco and over pop on villagers.

its a quarter of a villager

I assure you then that not even the Napoleon of AoE 3 could consistently exploit an edge like that to consistently win in treaty because of it (contrary to supremacy where timings are more important). I rest my case. @IkoKnight8151

well its good that you dont make those balance decisions then.

Idk where you got those numbers from, I’ve heard pro treaty player Floko saying that Japan is the strongest civ in treaty in his opinion.

That’s surely not the case. Plus, Japan’s treaty play has been nerfed pretty hard with the affrican DLC, they can now only hold 30 heardables, so no full shrine output for them (I personally like the change, the heardable feed felt very weird to me).

Either way the question is not if China is good in treaty but if that little extra trickle will make a difference in win rates for China in treaty, because it could really use it in supremacy but they won’t change it just because of this reason.

So in supremacy, that tickle is probably worth even less overall, but the real use is the opportunity it gives you: that tickle can make the difference between being able to queue an army or not sooner, and that opportunity cost is huge for China, since they can only train units in batches. It can make or brake a timing. To some extent, this can also be applied to treaty.

So yes, I believe making the tickle better by even just a bit will make China shine more.

Cards and upgrades shouldn’t be evaluated just by their overall resource value. In RTS there’s the hidden cost of timings and opportunity.