Do you believe the paths in the trailer where the soldiers and villagers were walking upon are created when a player selects placement of each building adjacent to one another, or does the pathway seem to be a separate icon requiring a certain amount of coin before their creation?

Pavements are usually a feature for city builders, but who knows. They could be created automatically.
Judging from the looks of the Mongolian base as well, I think the units will in some way affect terrain .

Nice pic.
In AoM, pathways are created automatically between buildings that are close to each other, which may be the case here. About units affecting the pathways, maybe this is a more complex form of footprints, or the roads were painted in the game before?

Look at top left chariot. There’s a road in front of it. Unless it is using the same path to move back and forth 100% of the time (which was kinda impossible to aoe2 trade carts), the road was painted. I guess the latter, to make the game more visually attractive to sell.

I think it would be a nuisance for an RTS if you had to create them yourself, they could be created automatically, maybe start as dirt roads and advance to stone after aging (?) just wild guessing there.

Some do look like footprints indeed. And if you look a bit more closely there are a couple of others too that I didn’t highlight. They could come from those two-wheel carts that are visible here and there in both bases.

But if those carts and vills leave traces then the chariot-like packed cart could leave traces as well.
I would be disappointed if they are just painted in the editor, like on the campaigns where we often see structures or other small details that can’t really be made in an actual game. That’s always been a disappointment. 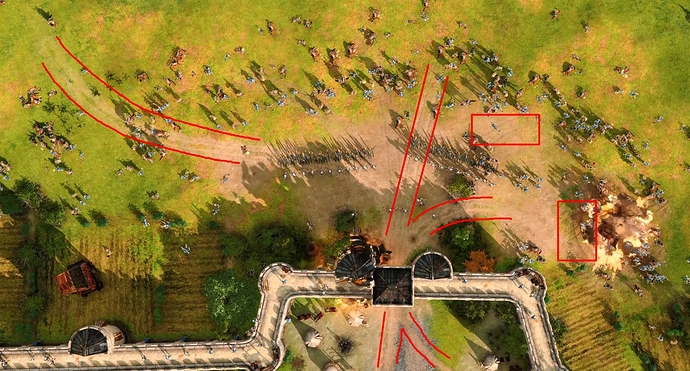 I’m almost sure it was painted in the editor. C’mon, most of stuff on trailers is makeup and perfume put over actual gameplay, everyone should know that by now.

I wouldn’t be that sure. Cinematic camera angles or high saturation to make the trailer prettier are quite different things from putting something on the map that will not exist when it arrives.

What we decided on pretty early was that we were only going to show what we knew would deliver and that was kind of our mantra. So everything you’ve seen in here today – and we’ve hidden a whole bunch of little things in here that people will find as soon as they start to go through the trailer frame-by-frame,” Isgreen laughs, explaining that the trailer has been captured from an early pre-Alpha build so we shouldn’t look too closely. “But it’s so important to us that everything you see in this trailer is stuff that you will see once the game lands.”

“And as we go forward and start to show more – and there is a whole bunch of things we have not shown yet, and not just civilizations, but aspects of the game that people don’t have any idea about yet – all of it’s real, none of it is fake,” Isgreen tells me, pulling attention to the army sizes, the battles atop walls, and numerous quality-of-life enhancements. “None of it’s not going to be there. We don’t want people to be like, ‘oh, what happened to that Falcon that was circling around the Mongols; I can’t believe they took that out!’ Nope, it’s all in. Wall combat as well, it’s all in there – it’s all in the game and it’s all working, as of right now at least. As we continue through development and show more of it, it’s our promise that it is all real. That’s one of the reasons that it has taken so long to show anything new, we want to guarantee that we always show real gameplay.”

On the other hand, it is nowhere shown in the trailer how those paths are created… so yeah… I guess we have to wait and see. It would still be a disappointment tho, same with those stake defences that the English soldiers have raised in front of the gate. I want them there.

Maybe the road is in the game… in an campaign scenario. Just like in aoe2de trailer, you also see building, stone roads, new units… and guess what, all of it is avaliable, but in campaign/editor. If the game ends like that, well, technically Isgreen didn’t lied about anything - all of the stuff is there.

Misrepresentation through false advertising if there is any painting with an editor taking place whereby artwork is “put over actual game-play.”

I mean… even the falcon that opens up the curtains for the trailer is going to be there as a feature. Who would have thought.