Game is instantly dropped/Crashed when he wishes or loses. Please find the attached replay to help against this exploit. He had a previous account as well and was banned, seems he just made another account. Hopefully you can patch the REASON of this exploits instead of banning users that have Steam Family sharing to just come back 5 mins later with a new account.

Have a nice game 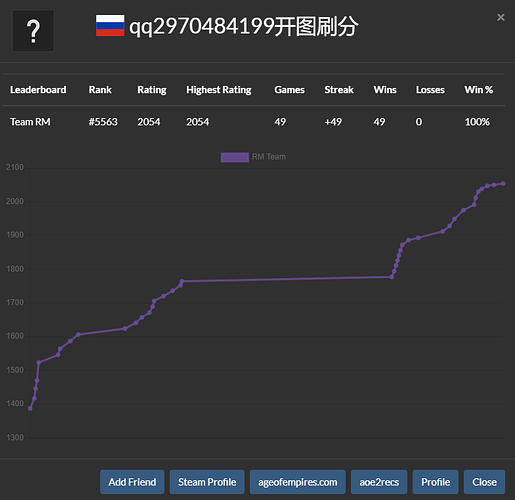 I just watched a few RP of his games. He’s quite noob and not deserved to this elo and win rate. All his opponents drop their connections when his team is lagging behind. For certain maps such as nomad, he just disconnects all his opponents right after the game starts.
Besides this force crash, it’s obvious that he disables the fog of way as well from the RP. His name “qq2970484199开图刷分” means “no fog to get elo” + an user_id of some chinese app. He’s advertising the cheating app which is very common in many other games.
So is the smurf issue, it might get better if Steam Family sharing is banned. However, it’s still hard to prevent these behaviors. If you don’t mind losing your elo, just discuss with your teammates and resign when you see them on the opposite team.

That usually gets pushback from anyone using it legitimately. The better solution is to ban Steam family share accounts from ranked.

Yep, Disable Family sharing for Ranked Games and better anti-cheat system. Else this will plague the game if not already. Devs can you please comment or acknowledge? Thanks

P.s
He is still quing in ranked and destroying every ones game:

Just found out, that number is his cell number for the chinese app called “QQ” which is like whatsapp. You basically msgs him and buy some hacks or what ever. Also yes, he has full control of the game including fog of war. This really needs to stop, but again MS will ban this account and he will come back 5 mins later with family sharing. I found that as well here:

As you can see his previous account was banned, he just made a new one lol.

Thanks for the report, i have brought up the issue internally

Thank you very much! Hoping the root cause can be looked after. Family Sharing and Hack exploits. <3

Why not buy the hacks and then work out how to patch them? That would be great. As would banning Steam family share accounts from ranked.