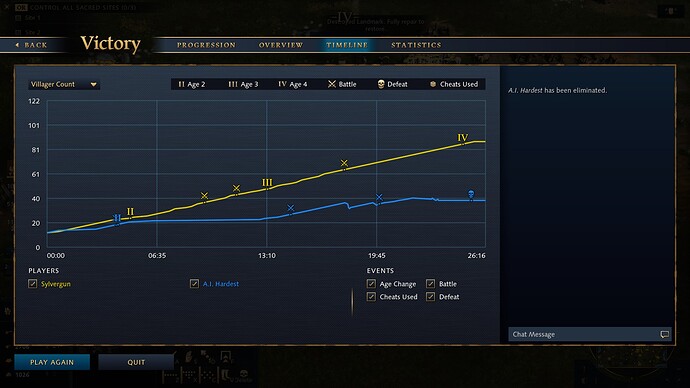 Hi team. After the issues with the AI earlier in the year, my wife and I were really looking forward to improvements with the recent update. Looks like it hasn’t quite happened though.

Please see attachment. This is the Hardest AI difficulty. It was a stomp, of course. What is going on?

We miss the difficult AI of earlier in the release cycle. Please fix and improve it. We’ll have to play something else in the meantime.

Any specific bugs or suggestions? Looks like you intimidated them into not producing villagers for a while or they just glitched out. The AI is decent if you don’t rush them, but the earlier you mess with them the more fragile they seem to be. One irregular mistake just snowballs into a big advantage even if they do snap out of the bugged behavior. They sometimes read threats perfectly, sending just the right amount of units to overwhelm a target they scouted. Other times, they are way too cowardly and hide their villagers for periods of time, or throw their units away. They are much better at initiating battles than adjusting to and defending from the player. Although they still need a lot of work on offense too because it’s way too easy to wall off sacred sites or wonders and just blast them with siege.

Yesterday I rushed a French AI with 1 tower. Their villagers didn’t even recognize me building the tower literally touching their gold mine. They could have killed my 1 villager and/or burned the tower down, but they let me complete it. Then as I filled it with spearmen they kept sending knights to poke at the tower. But they get close to the tower and turn around, only to swoop back in for another attack and retreat again, repeatedly. Basically they just cower back and forth, taking tower arrow fire, until the knights die one by one. Instead they should have held their knights back until they had 5-6 and they could have committed to burning the tower down. That’s just one example of how they’re behaving awkwardly but it’s hard to pinpoint exactly what is going on. It’s unfair of them to expect us to read the minds of their programmers and understand how to fix their game.

At least I get some enjoyment out of breaking the AI and complaining about it. Looking forward to them making it more challenging too tho.

I have a suggestion to improve the AI’s offensive strategy. Right now they build towers and forts in the middle of the map and at choke points which is good, but they could really benefit from building forward defenses. They’re best at ~12 minutes into the game when they scout out the booming player and team up on that person. Sometimes they push half a base down, but they don’t really keep the momentum going like a player would. If they build a tower or fort as close to the target town center as possible, just like every player does to the AI, they could retreat to something and keep their push going.

Thank you for reporting @Sylvergun! Do you remember which map you were playing on?

At least I get some enjoyment out of breaking the AI and complaining about it.

We actually really appreciate this