Healthbars are not snapped to screen pixels when rendered, resulting in several unpleasant visual artifacts:

These inconsistencies are very distracting, particularly when a large number of units are selected. This issue is not present in Age of Empires 1 DE where healthbars are much smoother, and have a consistent border all around when zooming and moving units. This isn’t a game-breaking issue, but stuck out to me immediately when I started playing AoE2:DE and generally gives a very unpolished feel to the otherwise beautiful new visuals, and puts an unnecessary strain on the eyes after playing for any length of time. The border widths also present an inconvenience in gameplay, as units can seem like they do not have full health even though they do.

I am playing on an RTX 2060 Super at 1920x1080 resolution and I’m not using the UHD graphics pack. All graphics settings are maxed out with antialiasing enabled. I haven’t noticed this issue in many youtube videos of the game, so maybe this is driver related or perhaps not as prevalent at other resolutions.


And here is a screenshot showing the inconsistent border widths on the healthbars. All the selected units have 100% health, but some of the healthbars have one or more edges that are thicker. In some cases, the thicker edge can be on the right, which causes the unit to appear as though its health has depleted. This also seems to be the main contributing factor to the shimmering when zooming. 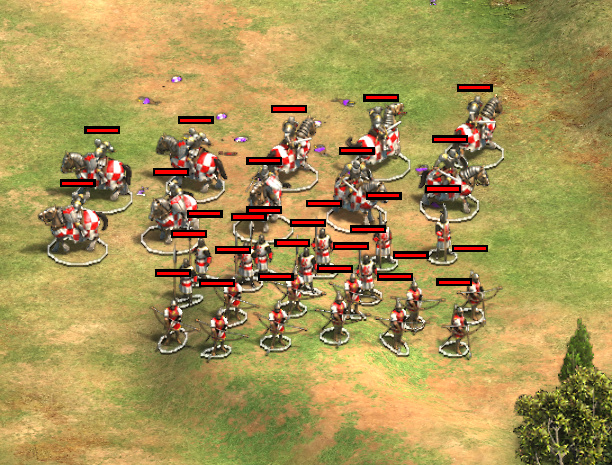 It would be a huge quality of life improvement to have this fixed. I personally feel that visual glitches like this undermine the huge amount of care and attention the rest of the graphics in this definitive edition have received, adding a veneer of cheapness over an otherwise high quality game (particularly when no other releases of AoE2 had this problem). It would be great if healthbars could be rendered pixel-perfect (or at least have some sort of smoothing), and it would also be nice to have an option to keep them a fixed size rather than having them scale up and down when zooming.

Mine does that, too. Pretty sure it has always done that since the game launched.

I have an RTX 2070. I just figured it was that way for everyone, but you say otherwise; interesting. Maybe the game needs to be tweaked for RTX users?

It may be an issue for everyone. I never noticed it in youtube videos before I bought the game, and yet it seems to be quite visible in the video I recorded, which led me to think maybe it’s GPU specific. But if others who have an RTX can chime in, and if someone who doesn’t have an RTX can confirm it’s not an issue, we may be onto something.