Hi, here I come asking for advices.
What plan or strategy could work playing with Turks against Berbers in arabia?
I feel berber can easly counter every move I could do with turks in every stage of the match.
Without pikes, I’m forced to go camels, which Berbers make cheaper.
Crossbows? They have more res-efficient knights, and still have skirms or Genitours.
CA? A long term alternative, but Berbers have Camel archer or genitour, plus the strong eco bonus with faster vils.
Jenissay? Requiere Castle…

Suggestions?
Should I just rely to micro?

Turks is weak against Berber in open map

Between 25-40 minutes you can’t win easily. So I suggest you can micro and delay them until 40 mins so that you can stand a chance in imp age. One of the method is to force them to use calvary by going crossbow or Skirmisher(but very bad) or Scorpion, and then micro monk to capture their calvary. In imp it would be easier to win him but it is still hard 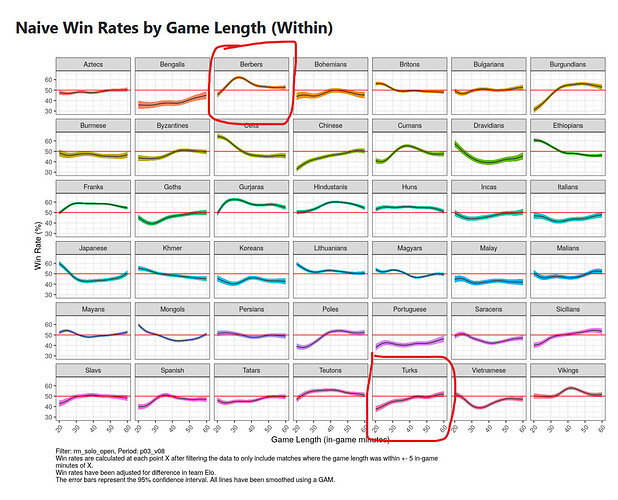 Should I just rely to micro?

But that’s the case with a number of the civs that struggle on Arabia Vs the easier to play ones. And especially in this case considering Berbers are like stronger versions of franks (albeit slightly harder to play)

1tc push with jannis and siege. If you have the castle defensively (which is probably the case) keep mining stone to get a second offensive castle at some point. You can also try to make some jannis and get some kind of boom behind as your light cav will be good vs camel archers (which will come as counter to jannis at some point) but as you already implied you don’t want to this matchup to go post imp so I’d opt for the more aggressive approach. Maybe I’d even make scouts on my way to castle age, add some spears and then try to get forward castle.

Keep the game in feudal as long as possible when Berber have no real advantage and your better scouts may shine. Else I guess it’s a tough matchup. Long feudal into castle drop would be my first approach as others mentioned castle age jannies are nice.

can I have the link to the site where you got that data?

Unless you are like 2k+ elo I doubt opponent will have strong enough macro to capitalize on Berbers Stable bonus anyway.

That’s nonsense. One player goes double stable camel and the other player goes double stable and boom behind. Every half decent player should be able to execute that. Macroing behind a mobile melee unit isnt too difficult. Berbers eco bonus is pretty easy to take advantage of btw (especially in a mirror strat). You just need to produce camels and you safe tons of res.

Berbers discount in Castle age is 15%, how many Camels will you make anyway in Castle age? Like 40? Then OK, you get 7 “free” Camels from eco bonus, give or take. I would generally not advise people playing into a civ’s strength (Knights vs Franks, Camels vs Berbers, Crossbow vs Ethiopians etc.), but sometimes there is no alternative. Camels also have 0 pierce armor, maybe opponent is bad and runs a couple into TC if the game is close or something. Maybe, the Turks manage to kill a couple vills in Feudal and gain a lead that way. In general, sure in an ideal world, Berbers win (which is why I said 60/40), but it’s also on the Turks player to force mistakes. You can, idk, open Crossbow, force him into Knights, add Camels + Monks, he adds Camels + Monks and you have Crossbow + Camel which is a decent comp (Camel is a very easy transition too and doesn’t need many upgrades unlike Knights). Later you add a few CA. I think people look at a graph, see Turks have bad Castle age and underestimate the importance of playing well.

If he is a Berbers spammer, doing 2-3 Stable Knights every game, chances are he isn’t great at transitions of macro anyway. Not to mention I don’t think OP is 2k elo.

For sure I would try to make the game about microing Castle age units, where you can boom behind and there are more macro considerations to be made, than advising to tower rush. Tower rush, while a great strat I admire, hard to execute, requires fine understanding of the game with small things like Palisades LOS, quickwalls, re-walling behind etc., also doesn’t teach you anything about civ matchups like I said. If you perfect tower rush, you can probably get 2.5 with worst Arabia civ (let’s say Bengalis?), question is, do you want to be that kind of player?

Obviously what you say of teching into Jannissary is also a really good strat, I’m assuming though OP is not in an elo where you can just go to Stone in Feudal and drop a free Castle at home without being behind in eco massively.

60/40 is good percentages for the Turks. But there are worse matchups. For example, Gurjaras vs any Knight/Knight+ Camel civ, let’s say Gurjaras vs Franks, THERE I would be far more worries as the Franks player than in Turks vs Berbers. Gurjaras probably beat Franks a good 70% of the time of not more.

For example, Gurjaras vs any Knight/Knight+ Camel civ, let’s say Gurjaras vs Franks, THERE I would be far more worries as the Franks player than in Turks vs Berbers. Gurjaras probably beat Franks a good 70% of the time of not more.

Franks vs Gurjaras is sitting north of 45%. the worst matchup for Franks is teutons.

this is just my gut feeling, you also need to understand that map, and especially actual player skill play a factor in this sort of statistics. For example, let’s say your “true elo” is 1000. My “true elo” is also 1000 and that of a 3rd person is 1000, too.

I am a Franks-only player, since I spam Franks, probably I will get inflated to like 1150 due to the civ being so strong.

You as Gurjaras probably even higher, I am thinking 1300+.

The 3rd guy plays Bengalis and as such is sitting in 850.

This is just a small example to say that “naive winrates” go by the assumption that people belong in that elo to begin with, and were not inflated by 1-tricking a broken civ. Civ pick and civ winrate are correlated, you would have to introduce a 3rd control variable like (picks Gurjaras more than 30% of the time).

Hi here you are
https://www.ageofstatistics.com/statistics/criteria?period=p03_v08&filter=rm_solo_all

and then micro monk to capture their calvary. In imp it would be easier to win him but it is still hard

Hi @Green4uu I guess you may have hardship on reading English. The Monk stuff are mentioned in the first place and anyway thank you so much to elaborate more on this idea.

Berbers discount in Castle age is 15%, how many Camels will you make anyway in Castle age? Like 40? Then OK, you get 7 “free” Camels from eco bonus, give or take.

You save more than 15 res per camel. So let’s assume both players go double stable camel that’s almost 100 more res per minute for berbers when both produce continuously. That’s basically the difference between going one tc and having second tc producing vils.

I would generally not advise people playing into a civ’s strength (Knights vs Franks, Camels vs Berbers, Crossbow vs Ethiopians etc.), but sometimes there is no alternative.

Well if there’s no alternative sure but the way I see it there is. Besides the janni play you could go for xbows, maybe xbow into knights one tc. Or rather knights and monks (I prefer that over camels vs berbers as this way you at least have some raiding potential).

Git this on ladder some days ago when I randomned into Turks vs Berber on Arabia:

Thought about and went Drush 25 vills into 2 stable scouts. The drush held him open and even denied his berries and the 2 scout stable production even got some kills.
Went castle age both quite late but I had like 12 scouts which instantly were light Cav.
Built a siege workshop forward and switched to camels from there on.

This worked quite good.

But I guess if he defends better it’ll be harder. Maybe towering his gold would be an option too.