Hidden armor classes should be shown when selecting a unit/building

This is something very confusing if you are a new player and don’t have that much deep knowledge about the game: as new player you might run into a situation, where you ask yourself, why is a halb only dealing more or less half of his damage to a cataphract compared to a knight, even though both have the same 2 melee armor. The answer is, that there is a hidden 16 anti-attack bonus armor, which protects the cataphract. Quite a few units (eg. ships, mamelukes, condottieros) and builings have hidden anti attack bonus armor, the question for me is though, why is this hidden? Why is it not openly shown for everyone, when selecting the unit/building? It would be a lot less confusing for newer players if it was always visible.

dude it gets even worse! did you know that cataphracts, have hidden armour that works against that hidden extra damage! like WTF!!! why cant they just show these stats.

Tbh I don’t think I’ve ever seen a single person arguing against having the extra unit info displayed.

Generally the extended information displays most of the crucial information a player needs when creating the unit. Allowing the player to use it in the niche it was intended to be used quite easily.

More advanced players tend to generally be interested enough and find out these additional bonus values to understand the usefulness of certain units better. There are plenty of such pages/guides around that tell these values and usually not that hard to find.

I guess it could be a benefit to have somekind of in-game “help” section alike to the History button that gives various snippets. Showcasing all the standard units and maybe the most important buildings there with additional information could also do the trick maybe? (Civilopedia - the encyclopedia of Civilization games is a good example)

To be clear they could have an “extended characteristics” option that when enabled, showed ALL the stats of a unit(yes in all its - glorious bloat) … So that people like me don’t have to have the wiki open to remind themselves that elephant archers are NOT listed as cavalry archers

I think this mod provides what you are asking for: https://www.ageofempires.com/mods/details/845/
It shows all those hidden stats and also fixes and improves most tooltips. It would still be nice if this info would be visible in game without having to use a mod. 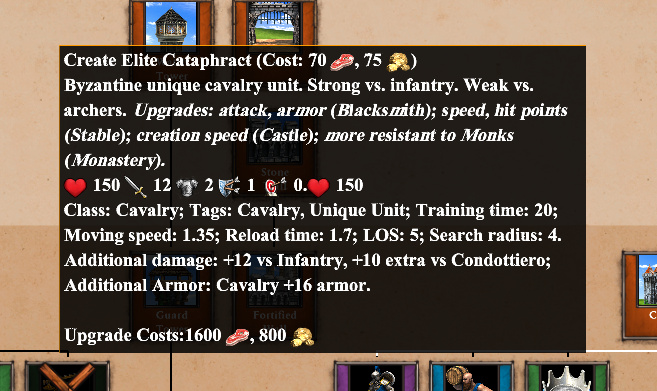 Welp, since there is no way it can possibly harm the game, there is no reason to be against it.

Civilopedia - the encyclopedia of Civilization games is a good example

Actually, Age of mythology has already a similar system. When you have something selected and click on its icon (the one in the UI) it opens an help menu with an history section, a brief description of its strengths/weaknesses, and what it gets bonuses against. You can do the same for techs you can research or units you can build by right clicking instead of left clicking. The only downside of the vanilla version is that it’s somewhat innacurate. For instance it tells that the egyptian Spearman gets bonus damage against both cavalry and siege weapon. However it doesn’t tell you that the bonus vs cavalry is only a 10% boost (ie.it’s still weaker vs cavaley than a hoplite, even tho the latter deosn’t deal bonus damage) while it gets double the damage vs siege weapon. However, there is a mod that changed it and provides all of this information (and even more, like all different villagers gather rates, what precisely each tech does and so on.) It’s a bit like what @Goldeneye4323 mention.
Also, @nhoobish isn’t opposed to this. He just mentionned that AoE2 sometimes looooooooooves lenghty lists when it comes to bonus damage, and thus it makes the feature harder to implement. And that’s why he draws inspiration from Civ to propose a better solution.