How do i calculate damage of gathlings? 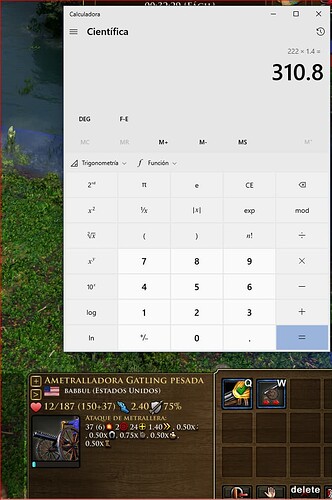 If you want it per second then it should be division rather then multipy.

so it should be

but after card that says gatling doesnt need to reload , does it mean that that 1.4 is ignored?

No the actual effect of the card seems to be reducing the ROF from 4 to 1.4. I am guessing that it takes 1.4 secs for a full volley to be fired, so effectively it fires continuously since by the time it finishes firing it is able to immediately fire again

It also still needs to reacquire targets, so it rarely fires “continuously” 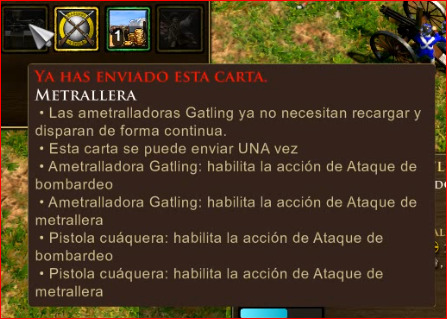 also teh card says it gives “bombard atack” or similar in English , but the IU on third age doesnt show it: 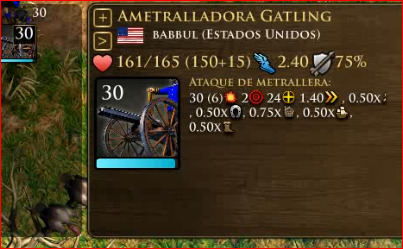 then it lacks info on IU about on how much time does the gathlin do the damage, as we guess that it applies the damage on 1.4 secs

No unit has UI info about how long it takes to fire, thats entirely dependant on firing/attack animation and is in no way standard

Yeah, although i think is less than 158 dps in this case because of their firing animation, i don´t know the exact time of the animation but i think is longer than 1 second, and i think the 1.40 firing rate is the time between when it stops firing and when it starts to fire again, rather than when starts firing, and when it fires again, wich is different, so the real DPS is totaldamage/(fireanimationtime+1.4) = DPS

Yeah, but even without that, i never see it firing continuously, you can see it when firing a building, it fires for about 1 second or more, and then stops for about 1.40s i think and it fires again. So i never understood or saw this continuously thing, yes, it fires quicker, but still it stops, so i don´t know if that is intended or what, it would be AWESOME if it really never stops firing.