What am I missing? Are the steam/xbox achievements part of the deal? If so I only have two left… Eternal gratitude (encounter a penguin during the viking Vinlandsaga) which is currently bugged and Masterpiece (win alone against 3 humans opponents) which mean I need to play 3 noob or have 3 friend that will lose on purpose.

But still if it is the achievements, it’s weird that it is showing 99% completion for campaigns : l

Anyone that actually got to 100% got any ideas? 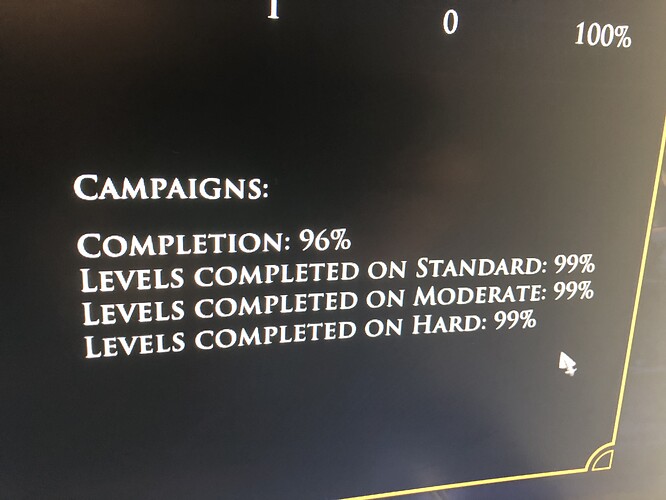 Dont know if its help but check the historical battles. they may be counted.

But also I think it does not work proprly. When the game was out I completed several campaigns. I have the achievements for them but in the campaing menu I got no medal. I think some update is the reason for that.

The main reason I think it doesnt work well is that it gives me: levels completed on the three difficulties 4%,3%,3% while the completion above them is 0%. how exactly it is 0 I dont know even if it doesnt count some of the things I have done at the beginning still those 4/3/3 should be worsth smth.

Hey, thanks for your answer!

I did do the historical battles too, all gold.

I think it’s just bugged. I also noticed like you said that after some updates, the medals were reset - I was a little annoyed that I had to do them again tbh ^^ But that probably messed up how the game completion is calculated

Well if it is just a bug, hopefully it gets fixed : l - cuz yeah, I’m not sure what I didn’t complete

I think it’s bugged, it’s the same for me, I reported it but there was no response

i also noticed it recently

Could it be them introducing the new DLC campaigns, and even though they are hidden, they are counting for the percentage?

Or is it maybe the barbarossa brawl or some other scenario that is being counted?

Could it be them introducing the new DLC campaigns, and even though they are hidden, they are counting for the percentage?

It would be a bigger percentage then? I doubt this DLC will just be a key to unlock already installed files.

Hi, have you completed the Barbarossa Brawl scenario, surviving for 30 minutes?

No, I haven’t yet

Man if that’s what it is it’s going to be tough - this challenge is really hard.

I think best I’ve done is about 25 minutes. But that’s when they send everything at you : l

I’m in the same situation. I found out that challenge scenarios count for the campaign statistics during the Mongol event. That was easier.
Good luck

I have seen Youtube videos how people do it. obv experts but you might check for ideas. There was also an exploit and smbd was playing it on slow speed what greatly increases your relative APM.

There may be a secret medal you need to get, “Beat The Viper”.

but now I know for sure 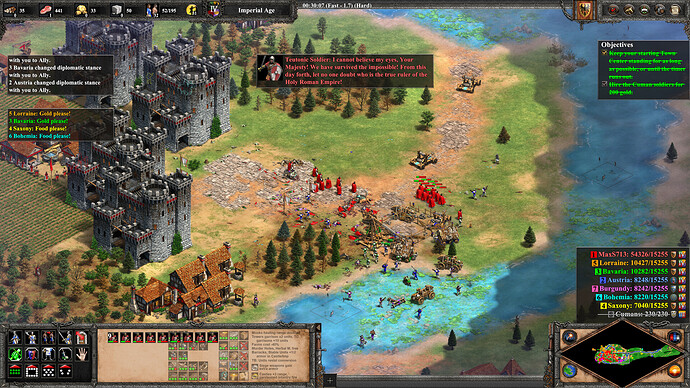 No worries mate, thanks for your input.

It’s still possible that the Barbarossa mission is somehow messing up the count, just leaving a gap in the completion count. There’s no real way to win or lose it; even if you don’t last 30minutes you are still “victorious”, it just gives you a score on the leaderboard either way. Still think it’s kind of a bug, hopefully someone in the dev teams takes a look at it!