How long did it take?

came from AOE2 DE, I kept watching twitch and followed the posts here, but I cant find any good reasons to buy the game and invest time for this game.

To me, this game is either half-finished product or it’s come from a team who doesnt really play RTS game (or maybe their management)
So I decide to give up this RTS game although I had bit anticipation previously.
Probably will try to 2042.
Yes, I am not a good FPS lover and player but would definitely wanna try that out. At least I can feel the competitive elements over there.

I think the same…without batch training,the game slows down too much and it is dead time in which you only dedicate yourself to creating an army and then the maps compared to those of aoe 3 seem dead and lifeless,although that is quite colorful…and the civs except the Mongols,seem unsived…

came from AOE2 DE, I kept watching twitch and followed the posts here, but I cant find any good reasons to buy the game and invest time for this game.

To me, the game mainly makes sense for competitive multiplayer, due to it getting rid of the problem of it running at a low update rate when bottlenecked by latency or performance of another player’s PC. I’d also hope that 4 is more cheat-resistant than 2. For single player, I think 4 mainly makes sense for people who have completed all the content in previous games and simply want more content to play, or if people prefer 4’s graphics or play style. It’s also fun to have a game where there aren’t loads of highly optimised build orders around, so there’s more chance for people to play about and work out their own strategies.

yes, I totally agree the points you have made.

This game is kind of new user friendly, AOE2 is very difficult for new player to start with as the BO determine the win game pretty heavily.

But the player profile and the end game stat issues really annoy me because it’s really really, far far below the standard of a game in 2021.
in AOE2, these are rely on some 3 rd party web-tool to fullfill it, but the mainpoint is, this should be an in-game profile itself. It’s really a basic point for me to showing there’s no sincere from Relic to really cares about multiplayer games.
example of this profile, this seems perfect to me, is it hard for Relic to make it? I dont think it’s hard.
It’s all about their Sincere to make the game good 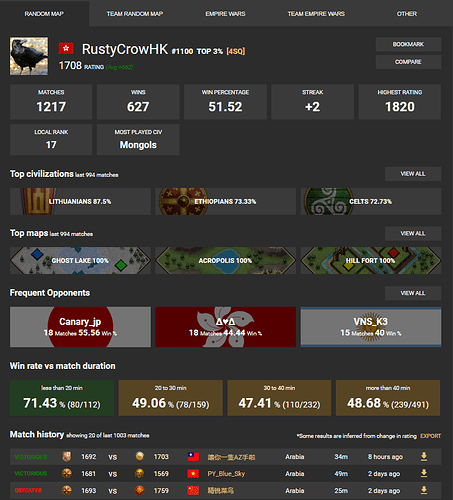 And I didnt even mention about the simplified end game stat, it’s even simpler than AOE2…
there are much can be improved, TC idle time, village killed, village numbers timeline, lots of stuff…

It is very relevant. An AoE4 man at arms listed training time is 22 seconds which looks comparable to 21 seconds for an AoE2 man at arms. However, since AoE2 is played at x1.7 speed, the actual train time is 12.4 seconds which is a much faster pace than AoE4.

All that matters is the real time comparison between the two as you show here. The x1.7 is completely arbitrary. It could be x1 or x10 and that would tell us nothing about how fast the game is. If I tell you there are two games and one has a clock that is x8 real time and the other is x2 you cannot make any conclusions at all about which games plays faster.

They could have fixed AoE2 and all the times in it so that the game clock was the same as real time and had everything still take exactly as long as it does now, but it they must have decided that was not worth the effort.

You are correct t doesn’t matter if the game time was 1 in-game second per real second or 10000 in-game seconds per real second. However, the game was originally 1:1 but was sped up to 1.7:1 because the pace was too slow, so now everything is faster than the stats suggest (on standard speed).

The normal speed at which the game is designed and which the tooltips refer to is 1. The standard speed at which it is played is 1.7, so in real-time, everything is 1.7 times faster than what is listed in any tooltips. So a man at arms which is listed as training in 21 seconds, actually trains in 12.4 seconds real-time (still 21 in game-time seconds). Because of that, a man at arms trains ~44% faster in AoE2 which significantly speeds up the pace of the game.