I see some players argue that not allowing players to see their opponent’s deck make them have no clues to prepare for what is coming. So? Isn’t it apply to all player?

When I see my opponent has many unit decks on age2, yeah I know he is rushing. Many crates? yes, FF.

Being a strategy game but not allowing players to hide their strategies. Hilarious.

For this game no, In fact it is necessary and it would be boring to see players who make a water boom and not be able to anticipate that, You practically gave the game away, Also it will not always reveal your strategy, There are many standard decks that you cannot deduce a rush at age 2 or FF.

I dont get it. Why is it boring?
Players need to guess what their opponent doing.
It applies to both sides.
Ok, I change it to most of the time. Isn’t that enough?

I agree, I have no idea why you can see another players deck, also not sure why when you build a tp the icon shows up, they should have to scout the tp if they want to know if you built 1 or not.

Exactly. Player should react or predict what their opponent doing.
You cnat think/react ahead for a “strategy game” Joke.

I don’t have a formed opinion about this.

But I do think that if you are unable to see your opponent deck, will make people play too much the same 3/4 solids strategies, that don’t have obvious counters.
While you have some idea of what your opponent is going to play, you might try something different that counter the build order that you imagine that your opponent is doing.
Also there are bluff decks in this game, that I think is quite funny.

But I still have to think more about that. Is one of the features that always have been there but I never really questioned.

For the most part, Decks can’t tell you what strategy your opponent will go for exactly, only thing it can tell you is if it’s a water map you can know if your opponent wants to go water, and there is a layer of strategy to it because you can fake out your opponent, something I see people do now with Spain to take an example, is they have 300 wood and 300 gold crates in deck as if they want to go logistician, but then they ff, it’s a smart strategy because it tricks your opponent, so I feel that there is strategy revolving around it.

It would be interesting to see how that would change metas.

also, I think hunts should not show as dead in the mini map to give away enemy vil locations in fog of war.

and trees not shake that are being cut.

i was unaware of this until now… how do you see someone’s deck? i personally think decks should be hidden (it’s not like empires are telling the other one which card they sent), but i may as well take advantage of this while i can

In Legacy it was possible to see the decks of the opponent before the game started.
Some people started topics here to have that reinstated.
Good or bad, seeing the opponents (and allies) decks is a game feature from the very beginning.

For Treaty plays, this is a massively useful feature, as it quickly tells us if the opponent know how to play Treaty or not. In casual games, we would just restart to not waste anyone time.

This is a really really bad idea. I used to think like this in the first 2 months when I first played this game.

But then realised that not seeing ur opponents deck just makes this into a guessing game rather than a strategy game.

It’s like playing a version of poker without knowing the type and limit number of cards that is available in the deck. That would just massively reduce the skill involved and increase the luck component.

What u have to realise is that there is only a limited amount of shipment u can send in an average length game. U will be lucky to send half of the cards on the deck in a normal length game.

Also the order of when to send the cards has a massive effect on a players strategy and build.

You must be new, give it a few months and you will come to the same conclusion

400 hours, 1300 in competitive game.
On the contrary, I think it increase the skill ceiling.
I know exactly what he will do if I see his deck. That’s lame in a strategy game.
SC2 and AOE3 shares similar elements like timing attack, widows mine drop ( cav raid vill) to stop gathering time. But SC2 has way more variation. Players are constantly react to their opponent and searching for information.

Not mentioning this game balance is so bad in modern sense. No frequent patches, Slow bug fixing speed.

Don’t know how hiding opponeny deck is going to increase strategy variation. In the contrary ppl will just pick the safe strat if u have no clue what the opponent is doing.

There are many different strategies that a civ can do, a lot of the civs can either rush, boom, semi ff, ff, fi, fi then revolt, sea boom. Some can atp boom etc…

A lot of players do just pick a safe strat because like any rts game, 1 build order for a civ will become the most optimal and have the least counters so it becomes the safest pick.

How is hiding decks gonna solve that? In fact it will just encourage it more.

Also u can’t exactly predict what the opponents gonna do just from a quick glance at the deck, that’s why scouting is very important in this game.

U mention u have 400 hours of game time. I’m sorry but that is still fairly low hours and I’m sure u are even exaggerating that amount to try to make ur point. That’s around 4-5 months even if we take ur 400 hours at face value AND assume that is all spent on multilayer games and NOT single player and non of it was being afk while logged into steam and the game.

layer and non of it was being afk while logged into steam and the game.

You are asking my understanding to the game. So I give you my play hours. 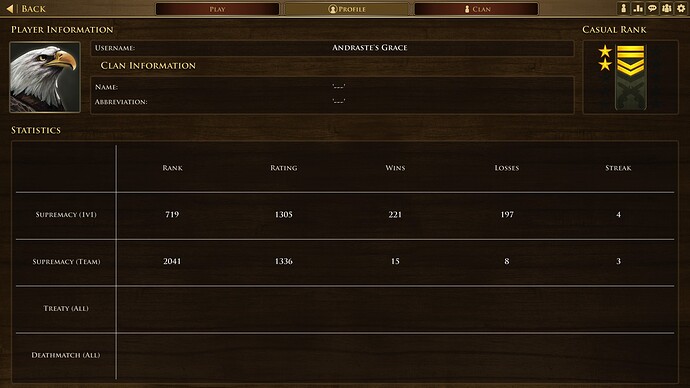 I mainly play ranked game on supermacy.
That’s why I think the card should not reveal to your enemy.
In ranked game, You know exactly what your enemy will do by seeing their deck.
Age2 / Age3 Rush. It just gives too much information.
I defend lots of age2 rush by just viewing their deck. I just build the counter unit and their rush will be useless.
That’s why I think decks should not be revealed.