As much as a clickbait it is I’ve truly spent hours, days throughout months capturing and reporting bugs.
None of the reported Malfunctioning Mechanics has got fixed, none were declared to be worked on in the last patch, I didn’t get a single response from devs.
No declaration to be tracking those issues, no questions asked, NOTHING.

Please leave it a like so hopefully devs concentrate on the right things and the game becomes a better experience for all of us <3
Thank You.

It is ashame that the devs dont really be active at the forum. You dont really see them responding to threads. If you are lucky you get a small post like ‘We are looking into this issue’, but even that seems not really a guaranteen that it will be fixed. I really hope they will be more active and will adopt a more open communication with the users. It will be much better for the game. Many misunderstandings will be solved.

I asked multiple times for a response of the devs. No one responds. I think every one has this kind of examples at this moment.

While I agree that the devs should be more active (like, you barely see the FE devs around)

I’m pretty sure eventually some of the ongoing bugs will be fixed.

Better yet: last year, i reported a bug regarding AI sopping working in restored mp games. The devs said they were looking into it.

Yet, day after day, more similar posts are merged, and everyone on the thread awaits an solution, which should have been avaliable semeral updates ago.

sorry man, i know how frustrating it feels, thats why i stopped reporting bugs, and i went through a period of doing really “weak” bug reports, because whats the point of putting in effort if there isnt even recognition, nevermind very little rectification… very frustrating…

Numerous bugs have been reported by many different people over the months, so you’re not alone. It’s unfortunate to spend time making bug reports and not see any movement on them. On occasion, though, you might get lucky… and then you’ve enriched a lot of other players’ AoE gaming lives

Sadly, I think it’s to be expected that some, or maybe many, bugs will never get worked on or addressed; that is, unless there are official devs still working on AoE2:DE for years to come. And a fair portion of bugs will probably never even be seen by devs due to how many come in and how busy they probably are squashing old bugs or making new enhancements.

Most of my words here in my post probably go without saying… so, my apologies for saying :-/ But I just think it’s important to keep a realistic perspective on things, and to try to be somewhat okay with how you did your best to try to help the game. It’s also possible that modders may have viewed your suggestions, too, and may be hard at work trying to fix some of the things that you and others report.

PS: If your 1st report link in OP truly was your first… well, that was just a month ago. I don’t think we could expect them to implement, test, and release within a few weeks of you reporting them. There are game-breaking bugs reported in Dec '19 that still need fixing, and several other bugs/enhancements before and after that which I feel would take higher priority than some or most of your suggestions. (Disclaimer: That’s only my personal opinion, don’t take offense. Trust me, I’ve made bug reports and suggestions that I’m passionate about, but where I might be the only person on Earth who is. Hopefully not, but if so, I try to be cool with it (i.e., I tried).)

I noticed you wrote a bit about the difficulties of selecting villagers behind things. Imo, that has always been a little imperfect in AoE, but usually you can get around it or click a different pixel and you’re fine; or just be patient if they’re building something. So, to me, I’d personally see this as a minor bug. It happens sometimes, but it’s not a showstopper bug. Or it’s not necessarily more important to fix than some pre-May 7th, 2020 items are.

All that said, I hope all your bugs get addressed if they are all, indeed, deemed bugs.

unless there are official devs still working on AoE2:DE for years to come.

I mean, HD was recieving updates for 6 years,

This is based on the AOC source code(unlike HD), so I think until at least 4-5 years, we will see updates and bug fixes.

I mean, HD was recieving updates for 6 years,

This is based on the AOC source code(unlike HD), so I think until at least 4-5 years, we will see updates and bug fixes.

Yeah, true! I’m hopeful and optimistic, based on interpretations of what they’ve stated in the past, that DE is not in any danger of losing dev support any time soon. I’m not really too worried about bug fixes and various requested enhancements taking a while to get implemented. It’s obvious to me they’re doing a lot of work still.

Make memes for the aoe2 subreddit, then you will get at least a reaction from devs. I see them way more often on reddit reacting to memes, than here giving us information when we will be able to start playing this game

after waiting several months, thats the state of thing.

As much as a clickbait it is I’ve truly spent hours, days throughout months capturing and reporting bugs.
None of the reported Malfunctioning Mechanics has got fixed, none were declared to be worked on in the last patch, I didn’t get a single response from devs.

I wonder why I got no reaction to this meme I posted last month. 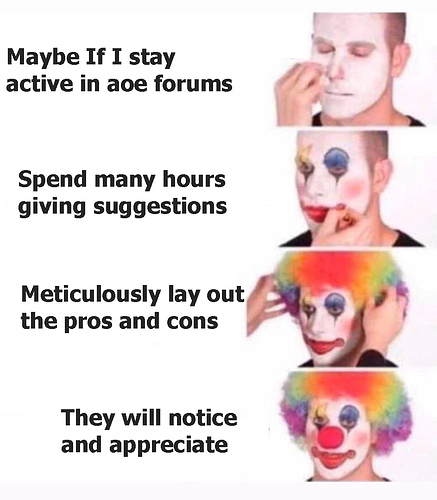 man, this is fckng GOLD

Lol I’ve just been reporting the SAME issue (An incredibly easy fix!) since the game released and it has gotten ZERO attention. I wish these devs were as active as other game devs are. This game is my heart and soul, but that shall be the one issue I ever have with it. 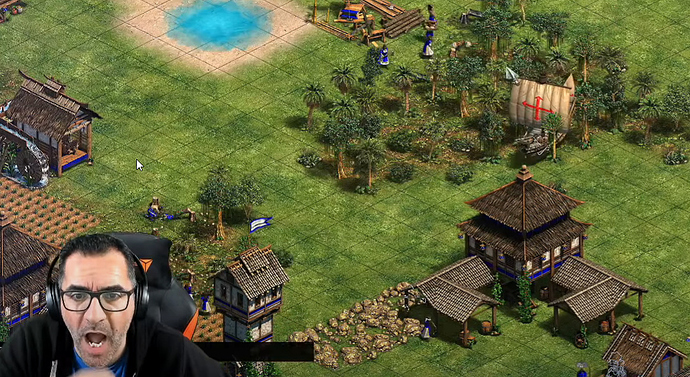 ahhh, you need something that does not point a finger on them

ok, then again a reaction is not worth anything, but still something