DESCRIBE THE ISSUE IN DETAIL (below). LIMIT TO ONE BUG PER THREAD.
I won a 4v4 multiplayer ranked game. After the game was over, myself (and apparently others on my team) lost several hundred points in ELO. The change of ELO is reflected on my account and AOE2net (verify my ELO drop on my linegraph - AoE2.net)

Don’t get me wrong - I am a noob and probably don’t deserve a super high ELO, but I can imagine people losing several hundred ELO after WINNING may be frustrating to some. Honestly the game has been so full of bugs recently that I have just started to accept it, but this one seems a bit drastic.

What was SUPPOSED to happen if the bug you encountered were not present?
Usually, when you win a game, your ELO increases. Always, your ELO should change by no more than 32. 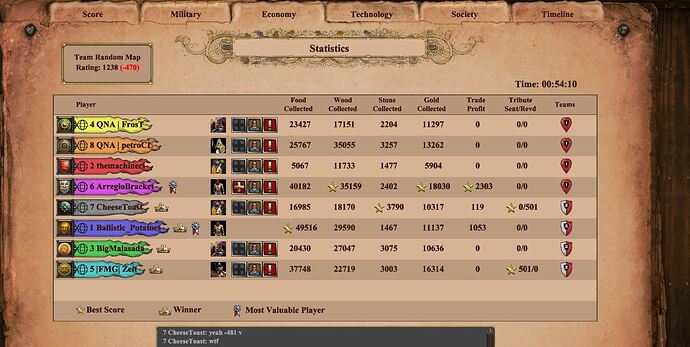 Interesting, is this the result of my ELO change?

I think it’s because you collected too much food compared to your allies, and the game didn’t like that.

Yeah there was a change to the Team Game elo system. It’s about time! Now things will be much more interesting. TG elo was always inflated, so don’t worry about it, it happened to everyone.

Yeah there was a change to the Team Game elo system. It’s about time! Now things will be much more interesting. TG elo was always inflated, so don’t worry about it, it happened to everyone.

Was there? I find no-one ever puts the patch notes somewhere where I notice them. I guess I’ll go looking now.

Yes, this is not a bug but intended as seen in the news post linked by furtherlime earlier

I’m just going to say, this new system also seems like it’ll create problems. Instead of having the top players get a really inflated elo, won’t it just end up with the lower level players having an inflated elo, because they likely get carried?

What? In their example, they literally have a 2k + 1k vs 1.5k + 1.5k. I don’t see how that means low elo players will be playing with low elo players.

Yes after 4 days and it shows that you are right. I keep encounter those with previously 2800 or 3000 rank, given that I was just a 2k player