Griots seem to me like they nullify artillery shipments. While they only have 16 range, they can be hidden amongst jav cav and other infantry making it hard to snipe. With 4.72 speed they can easily close the distance (5.43 with the mosque tech). Only 2 need to survive to weaken your 2 falconet shipment that get sniped by ranged units all while you have to deal with tanky melee cav.

I think one issue is with the age 3 shipment of 5 griots and 5 villagers. The resource value on it is 1250 when it should be closer to 1000. In age 2 Hausa has a 4 villager shipment as well as a 4 griot shipment. This shipment is 2 age 2 shipments combined plus 2 extra units (seems too strong to me). With one shipment Hausa boosts their eco while making my army worse. I think it could get nerfed to 4 villagers 3 griots (850 res) or at the very least 4 villagers 4 griots (1000 res).

With Age of Empires III: Definitive Edition - Update 43871 - Age of Empires, Griots were given the ability to stun with an aoe of 1. Was there any reason for that? I think it makes sense that if you want aoe on the griot you have to send the card for it. It makes it very annoying for infantry masses which some civs need to deal with the hand cav. For reference here is a single unupgraded griot slowing down 5 units. 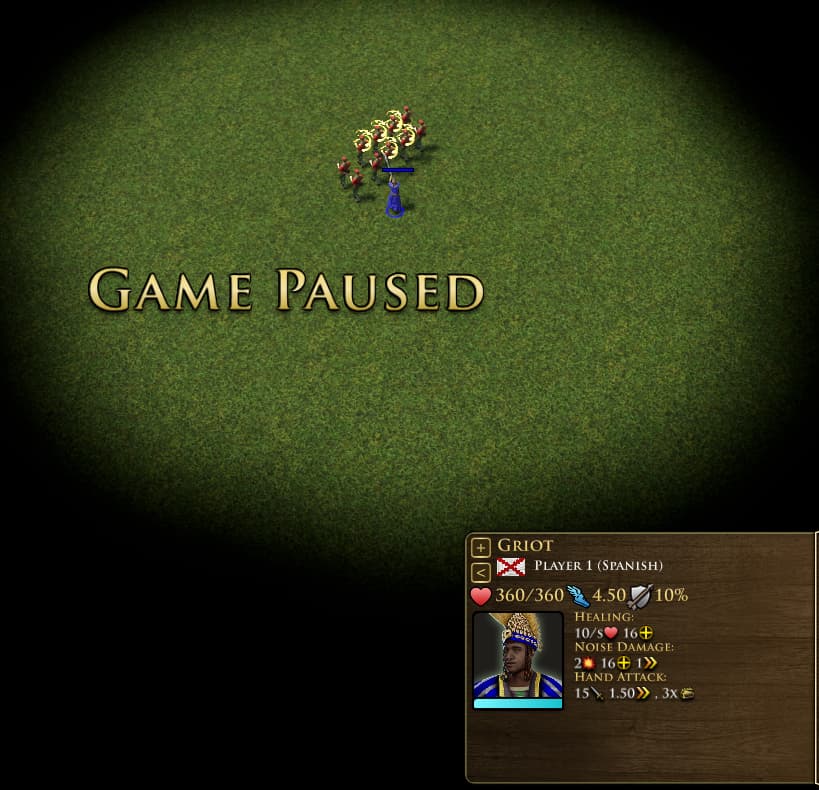 I think they allow Hausa to take fights that they otherwise would not be able to take.

I’m curious what you all think. Is there a problem with the unit itself? Is the age 3 shipment too good? Or am I just bad at the game?

Any tips on how you deal with griots would be appreciated.

At the very least I hope the devs look at the age 3 shipment.

What I’d like to see is a general improvement to healers with more interplay between them. Units like Priests should be able to bolster morale and shield from negative effects like intimidation inflicted by Griots.

The Griot is a storyteller hence the area of impact haha.
What would you like instead? A Voodoo witch or Voodoo lord? Than there should be a fear effect and contaminate the units around it, making them run in fear for a few seconds.

I’m not saying griots should not have aoe, I just think they should not have it by default. Hausa has a card in age 3 that expands the aoe of a griot. I think the intimidation aoe should only exist after sending that card. That was how they were on launch and for some reason they were given aoe by default in the patch notes I posted. Since 5 griots can apparently affect 10-25 infantry units giving them -50% damage, I think that is a bit too strong in early age 3.

I think you got a point. Each civ has shipments that are at a value more than the general 300, 700, 1000, 1600 resources that they should be worth, sometimes being key shipments to that civ. But if it’s over preforming then it should be looked at. Even 5 villagers + 3 griots would still be reasonable Value.

Can’t you just space your units out with the formation? Then an aoe of 1 wouldn’t effect them.

That is an option and I will keep it in mind. An issue I have with it though is that melee infantry such as rodeleros and Changdao swordsmen do not have the stagger stance so it would not work for them. In addition if you get attacked by lifidi, you probably would want to put your muskets into melee mode where they will bunch up.

I play a ton of hausa and honestly it’s rare I send or make griots at least in 1v1, typically I’ll either do the berber tp strat and aggressive age 2 or FF and send both shipments of lifidis before even considering griots and usually it’s over by then.

tbh I think the speed aura are a bigger problem with griots the the stun, the aura basically allows them to outspeed just about every other infantry comp in a lot of matchups and can make them either extremely hard to catch ( with 5 speed and potentially 20 range fulani) or akan muskets with 4.20 speed (with will basically murder skirm masses).

their rof could also use a change, with it arguably being too frequent at 1 since you can kinda stun lock the opponent , maybe 3 like a normal range unit or at best 1.5 to match fulani rof