You’re describing their ability to survive archers, not to kill them. That’s important, but so is their damage and attack rate

But rhey are still very good against archers. I’d build them over knights it my opponent was going pure archer.

You are correct, but I think at this point it’s a splitting of hairs. We know they are distinctly good against archers, and at a lower cost than the knight. But were they designed for that in mind? They were probably given the lower attack and attack rate as commensurate nerfs for what was an excessive amount of pierce armor to allow them to properly perform their designed role.

“Not particularly good against archers” is a slip but let’s not carry on about it, yes?

Actually their attack, health, and pierce armor have all been buffed over time. Og castle age tarkans had 90 health, 7 attack and 2 pierce armor

Interesting discussion so far, but not much said about the gold trickle idea. Let me throw out some numbers to discuss. Maybe 3-4 gold earned for destroying a house, so if you take out 15-20 houses with Tarkans you could pay the 60g for one more Tarkan. I think it would be based on damage/time spent on a building, so production buildings or castles would generate more. Definitely no resources given for breaking walls. You would be able to profit from attacking something like a hoise wall while villagers on the other side try to repair it, so some incentive for the opponent to send spears quickly.

Its not much gold, just maybe would give a reason to invest in Elite Tarkan for post-imperial 1v1’s. It would also be interesting for Huns to have a reason to not only drive back units, but erase the opponent from a map entirely. In team games this may even lead to burning down the town of resigned players and making space to expand (or not, since trade provides easy gold).

Again I fail to see why tarkans need to be buffed. They and huns are both fine

Nobody talks about OG castle age Tarkans. I don’t think Elite tarkans have been changed though.

3 to 4 pierce armor is the only change. Which is already pretty good. It took them from 50 shots to kill from arbs to 85

Tarkans are not particularly good against archers. They have 1 more Pierce Armor (intended to help them survive building fire), but they have 2 less attack than knights and attack slower.

Elite tarkan has 8 pierce armor that’s as much as sicilian cavalier. It totally demolishes any archer unit. Even nonelite with all others upgrades does great against arbs. Dmg output isnt all that important vs archers, pierce1 armor and hp are the key stats here.

I guess I could also be more clear. They’re certainly not an anti-archer unit like Huskarls, Tarkans are clearly intended to be anti-building.

They totally are an anti archer unit and in fact even one if the best out there. I mean they arw better vs archers than malian champions which should speak for itself.

@MatCauthon3 @Davyman3583 You’re both right, Tarkans are very good against archers. I looked at several archer counters and determined (with the combat simulator and some validation in game) how many of each unit were required to beat a death ball of 60 fully upgraded arbalesters, then compared them based on the total resource cost of the counter. I didn’t want to put in the time to check weighted resource costs or what the results were for non-upgraded units (including castle age versions). I also didn’t consider Onagers/Cannons because they are so dependent on micro. The Elite Tarkan is the #6 most cost efficient counter, and the five units above it are all specific to certain civilizations. Huns Elite Skirmishers performed poorly with their missing armor upgrade, so it seems they should be avoided whenever gold is available for Tarkans. 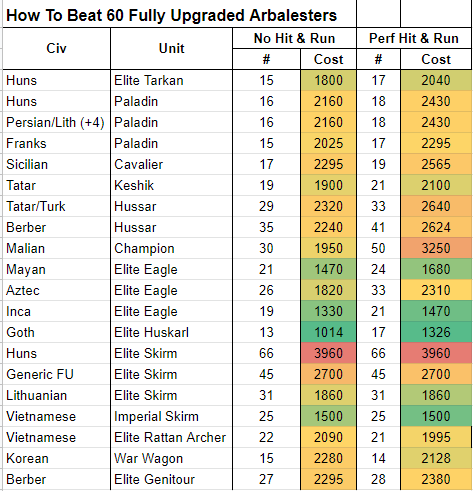 One interesting thing to point out is that the Persian +2 bonus vs archers doesn’t actually do anything once upgrades are complete, they die in 3 hits with or without that. Similar story for Lithuanian relics, as long as you have 1 relic you’ll kill arbalesters in 3 hits, so even at 4 relics they have no benefit over generic (Hun, Spanish or Magyar) Paladins. If you have zero relics as Lithuanians then it looks very bad, since 3 hits takes an arb down to 1 HP. Frank Paladins held up the best, equal to Elite Tarkans, but are more expensive.

Sicilian Cavaliers were not very impressive. They also have the issue that 3 hits leaves FU Arbalesters at 1 HP, which leads to them being similar in effectiveness to an Elite Keshik (slight difference in HP), but much more expensive (especially with the cost of Hauberk).

I also checked how all the non-Siege units performed against castles (looked at both Viking and Byzantine castles to see armor effects from Masonry/Architecture, while keeping Bracer to test Pierce Armor). For simplicity I only looked at how long it took 20 units to destroy the building, and the units slowly dying off was part of the test. Elite Tarkans tied with Elite Teutonic Knights for 3rd place, only beaten by Burmese and Persian Elephants (which are both far more expensive). I believe this is an acceptable place for Tarkans, far better than I recall them doing last time I checked (maybe something has been changed with the way building damage is calculated since then?).

I still think it would be fun for them to get a small amount of gold from buildings, but I admit it would be hard to justify given the results above and the Huns’ win rate currently.

Tarkans are just broken wtf - more pierce armor than any other cavalry unit in castle and imperial. Less price. God, when they had 1 less pierce armor in AoC they were balanced, but the balance team was like: Wait, we can’t let it be balanced, better make them broken

Good in the right circumstances. They’re far from broken though.

Tarkans are just broken wtf - more pierce armor than any other cavalry unit in castle and imperial. Less price. God, when they had 1 less pierce armor in AoC they were balanced, but the balance team was like: Wait, we can’t let it be balanced, better make them broken

Yeah a cavalry unit that has less attack than a Knight and paladin, also with a really slow firing rate is totally broken 11

You mean cavalier and paladin.

If they only had less attack, it’d be pretty sour. They also have a slower attack rate than… literally any other melee unit besides Halbs. (Konniks, before stirrups, are slightly slower, but much faster thereafter)

Tarkans really don’t have a lot of punch against units.

Tarkans have a hidden “attribute” deficit: They attack about 10 % slower than paladin.
If they wouldn’t have this they would be much stronger.

Look at these videos from age arena:

You can clearly see that Tarkans aren’t that much better against ranged units than paladins but way worse against melee. So it’s natural huns usually prefer the palading cause the tarkan doesn’t offers much better results against ranged but poses much more risk in being countered.

How you got these stats @WrathofInnos ? Have you inserted it in aoe-combatsim.com ?
(The 60 arbs imo disfavor paladins slightly as it is the perfect number for one-shotting them (Tarkans need 85), maybe you should make the same test with slightly different arb numbers aswell)

Yes, it’s been a few months, but many of those came from that combat simulator. I checked maybe 1/3 of those cases in the scenario editor because I didn’t fully trust the combat sim. The only micro was hit and run with the stop command, no focus firing (AFAIK the combat sim doesn’t focus fire). I wouldn’t read too much into absolute numbers of Arbs vs anything, just intended to compare different Arb counters with each other.

Ah ok I see now what is happening there. Paladins have a higher snowball than tarkans because of the higher dps. That’s why Tarkans are better in “countering” with comparable low numbers but with equal ressources palas perform basically the same.

Pretty much can’t argue that the Tarkan is OP whilst simultaneously regarding the Keshik as just another unique unit. Keshiks make Tarkans look flat out bad, that’s how good the Keshik is.

If the Keshik could be produced from stables like the Tarkan can it’d be absolutely broken. The castle restriction is the one serious, necessary bar keeping the Keshik from going mad.

That feel when your unit costs 50% more gold than the enemy unit, your opponent beats you handedly, and profits from your loss to the tune of 1100 gold.

Tarkans can be produced in stable, so it kinda has to be weaker than Keshik

I’m not saying it’s not without good reason. Hell, Huns can basically be Goths on Pony if they want to go into Imp Tarkan spam.

Unfortunately, the timing window for that strategy is rather small, very late, and it’s much more natural to simply stick with any knights and upgrade those more often than not.

i think it depends - if you start knight then it’s easier to stick with knight, but tarkans are good if you start CA, go imp and just want some meat shield when you are against archer civs, like britions