Oh man, I would love to see the original game cinematics remastered as well. Perhaps they could ask Tantalus Studio to produce them. But I sadly doubt that this game will ever have any investment in the near future, or ever again. But I still hope for it!

Yes, they let it dies. So sad.

It’s very sad to see our favourite games lose support. I still think we should keep discussing!! No matter what. The update from July was really great news overall, so I hope for at least ONE final update, as I said before. Please, make it happen, Microsoft!

No offense, but we have already discussed and talked about so much - nothing has changed.
What else should we discuss? I think the most important things have already been written so many times here. Beyond that, so many ideas have been written down here but the only feeling that remains is that MS completely misses the point. The main thing is that the Age2 community is fat served. Who cares that there are a few fools who love the predecessor and its unexploited huge potential?

Correcting or updating a game costs time and money. If the game is not profitable there is no point in doing so. After all it is a company.
It is sad but it is reality. The best thing will be to wait for a fan version as it originally happened with F.E. and now it’s official. 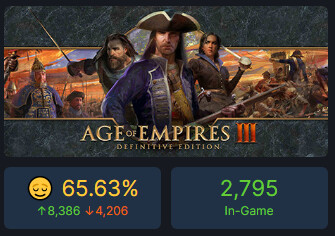 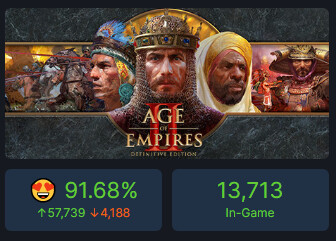 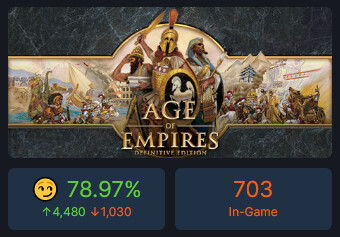 The sad truth is that the game’s features at the moment aren’t nearly as interesting or captivating as the ones from both its sequels.

Its development should have been far better planned and executed than it was. Let’s remember that the launch date was delayed from october 2017 to february 2018 and the game was still launched not only swarming with awful bugs, but also playing worse than the original. And, yet, incomplete, without any of the cinematics remastered, or the cheat code units graphics remade.

The game plays too clunky by nowadays standards, and I say that as someone that grew up playing it since 2000. I can’t believe they haven’t considered that, but I guess they have done what was possible with the cash they had in hand at the time. The team have done an impressive job on Age of Empires II, and I believe in their profissionalism, if they come to decide to turn their attention back to this game.

Unfortunately, they completely lost the launch hype. There are still some hundreds of loyal players playing it daily, but a mere shadow of its successor public.

If they are ever to invest more money on it, the desirable return to be expected would be to quadruplicate this player base, at minimum. And this number they only could be able to achieve, I believe, by adding to the game, in a single, big update, all those features and new content we have so much times discussed exhaustively here, promoted by a massive marketing campaign to attract those new players to an almost 3 years old game. I hope for somebody with vision inside Forgotten Empires comes to the front to lead this project.

Your are right. That is clear. But then they shall say it. It exist no communication from MS. By the way, MS has produced a game with a lot of bugs. It is a matter of decency that they correct them. After all, we all paid for a finished game.

We all knew that DE 1 would have few active players. But it’s funny how DE 2 crushes DE 3.

AoE 3 was the worst part for me.

The game plays too clunky by nowadays standards, and I say that as someone that grew up playing it since 2000. I can’t believe they haven’t considered that, but I guess they have done what was possible with the cash they had in hand at the time. The team have done an impressive job on Age of Empires II, and I believe in their profissionalism, if they come to decide to turn their attention back to this game.

That was intentional on their part. They wanted the game to have that retro feel. While having played that game back in 97 I like the retro feel but I sincerely feel they should’ve made it optional under a retro mode control scheme in the game options. They can still do this and if they do the AOE1 numbers will surely cross that of AOE3 and maybe it’s something they don’t want? But hell, if they did that and we got the AOE2 improvements like proper streamlined unit control, formations and pathfinding, I’ll bet a lot of AOE2 players, myself included will start playing AOE1 again.

If I would have to choose do I buy new DLC/Expansion to AoE1 or AoE2 I would actually choose AoE1. AoE2 feels more like finished game, but AoE1 could use so much more new content which can be new maps, campaings, units, techs etc…

I make your words my own! What you said is exactly what I expected to happen. To bring on some key features from Age of Empires II to the first title to make it more palatable for modern tastes, while offering the option for the players to experience the ways of old.

From my perspective, the game should include gates, line formation only, and the flare signal. Unit stances have already been implemented, but are broke at the moment. No garrison or other types of formations, however.
Graphically, the creation of unique wonders for each civilization would be a, well, wonderful touch

And then, remake the cheat units models. A little more work on the Egyptians building set would be welcome too, making them more colorful, as they were in reality.
Finally, the scenario editor could be enhanced by the implementation of some of the Age II triggers, but not all of them. Many would look out of place within this game.

But, before all this, the devs could at the very least, finish the game

Add all the cinematics, the scenario objectives map screen (which was really cool, and I miss it), and correct the bugs.

They can still do this and if they do the AOE1 numbers will surely cross that of AOE3 and maybe it’s something they don’t want?

By that, you mean they do not want more work than what they already have with II and III?

But, before all this, the devs could at the very least, finish the game

Add all the cinematics, the scenario objectives map screen (which was really cool, and I miss it), and correct the bugs.

I get the feeling that AOE1 DE was just Microsoft testing out the waters before delving into the most popular one in the series AOE2 and the subsequent redheaded stepchild AOE3. I mean think about it, back when AOE1 DE came out hardly anyone still played the 1997 AOE1 with AOE2 HD drawing most of the crowd followed distantly by AOE3 and AOM. AOE1 DE was fairly successful at launch with above average ratings that could’ve been improved if they had brought on the AOE2 improvements into the game. AOE1 DE has infinite potential and I would go as far as saying to give AOE2 a run for the money but I doubt they would even attempt to make their own products compete against each other. It’s a damn shame though.

By that, you mean they do not want more work than what they already have with II and III?

Not just that, if they went ahead and brought all the improvements to AOE1 first thing that will happen is a lot of AOE2 and AOE3 players would immediately start playing it and if they do it right it will further dwindle the AOE3 player population. Now just think about it, AOE1 is an almost obsolete over 20 year old product that got a new lifeline with DE but AOE2 and AOE3 already had a solid playerbase (perhaps a little less solid in case of AOE3) so not only will it mean more work but also it’ll inversely affect the AOE3 community and I don’t think its a direction they want to take. I could be wrong though but since they have pretty much left AOE1 DE development in a limbo it seems more likely than not.

The word is planned obsolescence and everyone (sLActivision, bLizzard, Electronic fArts) does it (Call of Duty, Diablo, Battlefield) just hoped Microsoft would be above it but nope, not anymore.

You could still have different player base since all 3 AoE are based on different timeline. Some people like more ancient/classical era, some medieval and some like more gunpowder era with cool cannon and naval battles.

We ideally could and also it’s not like the players can’t play all three or two games interchangeably and they have to be absolutely dedicated only one. But try convincing the makers that.