Idea: Monks in Castle/Tower heal units in there

It would be really awesome if monks inside a castle or tower could help heal up units. They could priorize units with lowest HP.
In addition to the obvious effect it would add some nice flair and RP effect. Units return back home into safety where the skilled monks await them to cure their wounds. The more monks you put in the castle the faster the healing.

Next to herbal medicine that would be a very awesome healing mechanism while keeping the monks safe and reducing the micro.
On top of that it would help a bit to solve the (new?) issue that monks just don’t stop walking around to heal units what causes them to die a lot.
This “feature” is only good in a safe areas. But if you want to keep your monks behind your army it is a bad thing when they move to the front trying to heal a unit at the front line where they obviously die. We need a stance where monks will never move no matter what.

Edit: If you consider that healing too powerful it would be possible to half the monk healing rate inside a castle/tower. The good thing would be that they would still heal up the worst wounded troops.
Herbal medicine would heal all units slowly and monks help heal up the units which have very low hp.
In my opinion that would be a really nice addition.

I also don’t think that it would be too powerful especially with half healing rate. It is almost the same as monks behind a castle and microing the units with lowest HP to the monks and sending the others into the castle which is not really fun. The new mechanism would let you spend your time on more important stuff than microing the healing.

Having stand ground stance for monks would really help

Why? Don’t they just follow four tiles and return to their position if the unit leaves away?

I had it happen a few times that monks were not standing where I placed them. It didn’t seem to me that they return back to where they once stood. Moving 4 tiles and then return after healing would be “ok”, but I would still want a stand ground to make sure they don’t move at all into enemy archer fire or worse.

@JoJo9942, @Arpheus2
I did some testing and it appears, that monks sometimes return to their initial position and sometimes don’t. I couldn’t find any clear logic in this and would classify this behavior as unintuitive and buggy.

The cost needs to be reduced, as they are definetly never worth as much as a 100 Gold in any practical battles.

I could imagine that it would cause a problem in early castle age where monks are strong.
The best way to make them cheaper if this is wanted would be to implement an imperial tech in the monastery which lets them be created for example 20-25% cheaper.

Another way of buffing them could be that there is a 10% chance per for example 5 seconds that a monk does a conversion automatically.
If you have lots of monks that would at least give you some auto-conversions from time to time. You will never want to have reliable auto-conversion since that would make them instantly OP.

@Yorok0
I also guess that it is a bug and it is the main reason why my monks often die. Stand ground is really required and I guess it is not too hard to implement.

Another way of buffing them could be that there is a 10% chance per for example 5 seconds that a monk does a conversion automatically.
If you have lots of monks that would at least give you some auto-conversions from time to time.

Great Idea
Monks should have this kind of partial auto-conversion, or they’re really inaccesible to most players , and even for the pros only very few will ever be used.

I would love a stand ground function for monks- we didn’t have this problem in HD, I could keep my monks within a healing fortress formation without worrying about them exiting through non-existent cracks that no other unit is able to go through (29 teutonic knights, 21 hand canoneers, 10 monks, square formation stand ground) they are unable to move outside of the square manually in DE, and never in HD. In HD they stay dutifully within but in DE I have to keep tabs on the terrible ‘feature’ of them suddenly walking outside of it on their own even tho I myself am unable to remotely send them outside of it unless this ‘feature’(bug’) suddenly rears its invisible ugly head

If you want to see monks, I have a great tip; Try harder so you play with people who can actually controll them. Monks are very frequent vs knight civs.

Monks were quite worth their cost in this battle 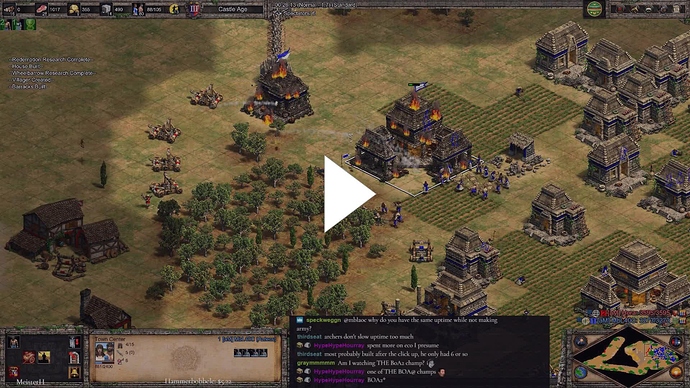 The cost needs to be reduced, as they are definetly never worth as much as a 100 Gold

I like the idea, we should have more of these “little things” in AoE II, I think. Downside: perhaps too much work to implement and also rather situational.

On the monks: they are used a lot in the campaigns but not so much in ranked play. However, they do have their purpose, and pros do use them regularly. I think the unit right now is fine, the conversion rate has been improved in DE and now it seems all right.

If it were up to me, I would make three small changes though:

(1) and (2) because there are simply too many techs for monks compared to other units, and they are often quite expensive; (3) because 100 gold is so much.

What would you think on this?

Units on buildings that have a monk garrison heal twice as fast, units within 3 grids outside of a building that have a garrison monk heal slowly at half the regular speed.

However if the building have units inside and outside, the garrison monk will heal the inside units first then the outside ones (as a normal field clinic)

I did not realize how old was the thread until after I posted.