If Saracens market gets nerfed due to this bug

I personally think their team bonus has to go, even at +2 attack vs buildings

I also think this is a bad design. But without this bonus or market bonus, they are just a underpowered and boring civ.

I want this one for Magyars. All CA units trains 25% faster.

or we can just leave them alone.

I wouldn’t mind. Both are fine as it is except for the bug.

think their team bonus has to go, even at +2 attack vs buildings

Having “siege archers” means they don’t need to invest as much into siege weapons in castle age. Which ties into other civ’s more consistent eco bonuses

Saracens have specific power spikes due to their eco, but I don’t think it’s as consistent as something like Mayans(until very late game)

They also lack an economically efficient knight line equivalent unless you’re willing to invest into limited lifespan knights(making them only a limited time power spike), which is also a drag on their eco. As nice as their camels are they still don’t fill the same role as effectively as eagles, knights etc

Unique Tech imo, people want Obsidian Arrows back, I want CA with anti building damage so why not combine both.

This is already significantly weaker than Obsidian Arrows cause its 1 damage less than OA and Saracens dont have cheaper archers to mass them crazily. And for that you get +2 for free for all your team at the moment, +4 doesnt seem too crazy. Can also remove Arbalest if necessary to make it only +1 compared to the team bonus as Arabs werent really users of crossbows.

Zealotry becomes the civ bonus, which at only +10 seems a bit incomplete: Camel Units +10/+20HP in castle/Imp

New Team Bonus becomes: Horse Units trained 20% faster to give Saracens something for their Arabian Horse flavour and they were also one of the first civilzations which wrote recipes for horse breeding

Probably a better call. NGL, it is really a fun bonus to play with but very annoying to face against. Problem with the bonus being a TB is other flank with top tier archer like Britons or machine gun archer Ethiopians often feels OP to me.

Which is better than Koreans post imp Cavalier and arguably even better than Vikings, Malay, Bohemians.

As nice as their camels are they still don’t fill the same role as effectively as eagles, knights etc

True. But I think after DOI, it is still the best knight replacement for any non-American civ imo.

Wait, what? Really? Who? I want to meet them. it was a horrible tech. No more bringing it back please.

Wait, what? Really? Who?

This. The time or two ice seen it brought up on reddit, gets laughed off

Which is better than Koreans post imp Cavalier and arguably even better than Vikings, Malay, Bohemians.

Wait, what? Really? Who? I want to meet them. it was a horrible tech. No more bringing it back please.

Wanting OA back for Mayans is a bad idea but something like a unique tech that restores the old Saracen CA bonus would probably be fine, like they merged it with the archer bonus then didn’t bother to put it back in when they introduced the camel bonus because absolutely no one cared about Saracens CA competitively anyway.

I would say pretty much underused it would then be. People should really stop crying out of overreaction.

OA on a civ with 30% cheaper arbs that does +5 damage is totally different to +4 for a civ with only FU xbow and not as good UU (so castle investment doesnt pay off as easily). Right now, Saracens get +2 for free, I ask for +3 effectively an age later and you need a castle and Ut.

For most buildings +2 is essentially +1 as the building often has enough Pierce armor to offset the full value of the Pierce attack.

For most buildings is a flat 3 if you’re talking about Saracens bonus.
It’s mistakenly written as +2 but it’s already +3 in reality.
It means you can’t do less than 3 damage against buildings, and as you said, since most buildings have high pierce armor values, you’d simply do 3.

People should really stop crying out of overreaction.

And people should also stop turning archer into siege unit.

The only reason, I don’t want to change Saracens TB despite not liking the idea is it gives them an unique way to play - market (ab)use into 1 TC archer all in. Any nerf to their archer or their market will make them a jack of all trade, master of none civ. Their camel play is already worse than Berbers, Gurjaras and Hindustanis.

Bug has been fixed without changing Saracens balance as I hoped. But

They had a 4th option. Changed bottomed out market price.

Lowest buying price used to be 21 before. 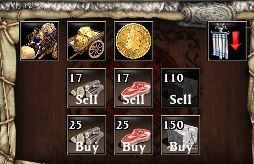 So market is changed secretly. (Unless I’m horribly wrong and this change was made way earlier).

Also, I feel this was pretty unnecessary either way

Also, I feel this was pretty unnecessary either way