If you could add anything gameplay-related to AoE3 what would it be?

These units, due to their elitism in the previous era (the Middle Ages), would have been endowed with the coat of arms of civilization on their shields. Such are the shields for individual civs (a small reference to AoE 2):

Some civilizations would receive completely new shields due to the fact that they were created outside the historical AoE 2 framework or because of the lack of such a civ (or proper coat of arms).

It would be interesting if there were weather elements in the game, but adding this wouldn’t only be for the sake of contributing to a more immersive gameplay experience it could also play an active role in terms of strategy. Imagine if you were in the middle of fighting an adversary player and then just suddenly a fog or a sandstorm sweeps into the battlefield, which would significantly lower the visibility for both you and the other player. Instead of being a typical upfront battle it would instead transition over to a battle with a series of ambushes, where the player can’t anticipate from which direction that the other player will attack from.

Introducing weather elements to the game would of course also mean adding hazards to the map, where hurricanes and whirlpools could occur out in the water and serve as a danger for ships. The same would be applied for land where tornados, hail storms and lightning strikes would appear.

This idea of adding weather elements to the game was partially inspired from my experience of playing [Battlefield 1] for the first time during 2021, and a little bit from [Battlefield 2042], where this installment of the Battlefield franchise takes place during WW1. If you haven’t played [Battlefield 1] yet then I would strongly recommend playing this game just for the sake of experiencing it, though I have to admit that this game does sometimes have some serious balance issues. 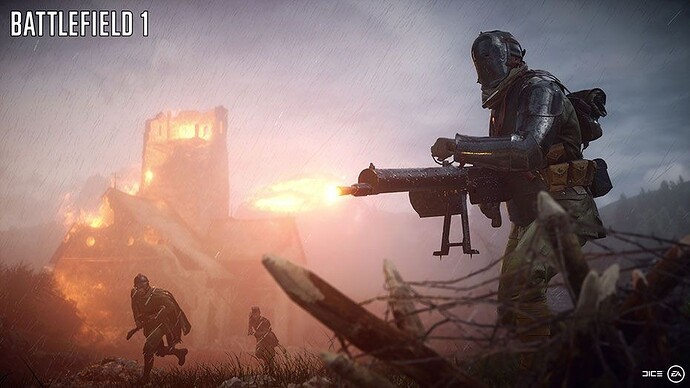 Now that I think about it, a day and night cycle or night maps could also be interesting to have in [Age of Empires 3].

Co-op missions not co-op campaigns or historical battles. Somewhere we can play PVE together in a casual manner like SC2’s with progression system like profile levels and more home city cosmetics such as banners, etc.

Now that I think about it, a day and night cycle or night maps could also be interesting to have in [Age of Empires 3].

That could be fun!

Reduced line of sight for units unless maybe near a building (where you’d hope there would be lanterns near by), or even the ability to construct lantern posts to negate this.

Weather could be fun too, though it might have to be done in the center of maps, so now one is under bad weather or nearest to bad weather whilst the other avoids it’s - basically to make sure it’s fair. I’d love to see blizzards that slow your units or storms that effect gunpowder units.

Exploration Age Combat
We have 5 ages in this game, though I always have felt that the first, representing (initially at least) the 16th century - the start of the Early Modern Age is possibly the most interesting out of all the Early Modern Eras depicted in the AoEIII timeline. Armies were at the crossing point medieval and early modern - full plat armour knights versus pike and arquebus, nations were starting to grow national armies/navies, and many countries were pursuring colonies and trade internationally.

Whilst this wishlist change would be an absolutely massive change, I’d love to see the Exploration Age to have (like in almost all other AoEs) an early military presence allowed. It’s always strange to see all the archaic units and ‘modern’ units suddenly available in Age II which traditional is the 1600s.

This would be great for an AOE-3 inspired sequel with the same time period setting (1490-1800s). Just before the American civil war, since from this time the melee attacks begin to lose relevance and everything becomes very industrial.

For example, to unlock more advanced units like skirmishers and dragons, you would need to build an armory to unlock those units (in addition to advancing to age 3). So the most primitive units would have a little more prominence.

I like that there are more mechanics related to buildings. As the Italian card that increases the production of buildings with armories nearby, I love that they give importance not only to the building itself, but also to the construction location. I would love that they add one more building, I don’t know which one exactly, but to add one more layer of mechanic to the game. I also like that they have added a passive income to the tavern, they could do something similar with the barnyard with food instead of gold.

I would make all horse archers able to attack while moving (as in AOE-4). It could be default or just a new formation.

It’s hard to hit and run with them, and against dragon-type units they’re somewhat inferior, so I think this would make up for it.

Wall Choice!
I think Wooden Palisade and Stone Walls should be two seperate structures - wooden walls for cheap, fast defence and Stone for the more expensive, time-consuming alternative. Giving us a choice would be great. You could have Settlers/Villagers (with their limited space on the building tab) just build the strongest available (i.e. Stone if researched), but the option to build either with Settlers if there is space on their tab or certain military units (maybe Pikemen to give them more use, or even an Engineer/Pioneer

Wall Defense
We will never see guys sitting on the walls nor will we ever see those huge campaign walls (except on certain maps), however it would be nice to select a section of wall and add a Tower to it. When, like the Gate upgrade button, you push the ‘Bastion’ button, you get to add a Bastion/Tower structure to either side of the wall section. Obviously you want to put it on the outer part of the wall, but its up to you! (this covers the problem which would happen if the campaign walls could be built - the facing aesthetics of it). The tower addition would essentially be a more fitting Battery Tower (scenario building) that is part of the wall.

Wall Aesthetic
Wooden Palisades aside (as wood defenses would broadly the same), Stone Walls should be more fitting for the Northern/Western, Med and Central/Eastern European civs. North/Western civs should stick with the current stone, Mediterranean civ walls should be much lighter (almost beige/white) stone and Central/Eastern Euro civs could either be the current stone or red brick (which ever is more fitting). Towers could aesthetically be round and tiled or square depending on region.

Pioneers, Engineers & Sappers
Whilst artillery will be the best against fortifications as before, I would love to see Pioneer/Engineers for most civs, who are expensive but would be a multi-tool Siege Trooper! If they can get close enough to a wall, they can blow it up with a timed Powder Keg (costing resources to deploy it). Engineers, along with being able to construct Wooden Palisades even when Stone Walls are researched (linking to the first item), can also build:

Stockades
Making using of a Campaign only building, the Stockade is a cheap, garrisonable fort. Whilst having no firepower of its own, they can be garrisoned with any Gunpowder unit to provide musketry-fire as its attack, with attack power based on how many units garrisoned. As a cheap structure that can only be built by a Pioneer/Engineer, it won’t last very long again mortars and cannons, however could be useful as a forward base (for shipments) and as something to hide in if outnumbered.

Gambion
Gameplay-wise, the artillery equivalent to the Stockade. Gambions were wicker cylinder/barrels that were filled with earth and used to fortify cannon batteries. Once built, Gambions appear as a circular wall. When you garrison artillery into it, the guns appear in the middle of the ‘nest’, which add slight Artillery Resistance and extra range. The downside to this fortified battery is that the cannons have to be ungarrisoned then limbered up again, so they are sitting ducks when anything has gotten close.