This is from right after the game so not a replay bug. The map was ancient spires. I was Mongols opponent was Chinese. I think his number of relics is correct but mine is not. I 100% only had 1 relic in that game but it says I had 3. 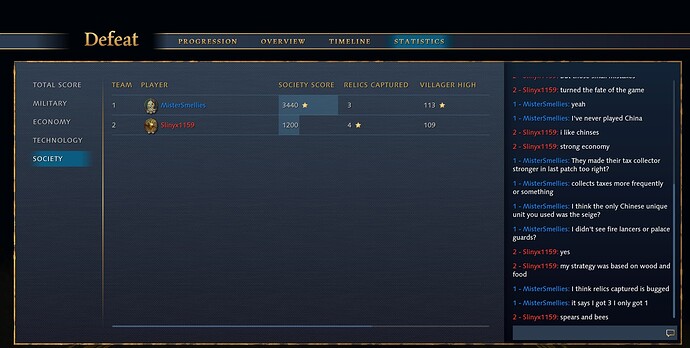 I have reported here before that sometimes after match stats are straight up wrong. I’ve mostly observed the timelines being wrong.

Post-game sometimes displays stats from a completely different match too. Sometimes even with a different number of players.

Yeah that happens on replay files I noticed. Usually restarting the game fixes it. You mean you’ve seen it immediately after a game ends too?

Thanks all! We are aware of a number of issues regarding post match stats.

Post-game sometimes displays stats from a completely different match too. Sometimes even with a different number of players.

@deadhamsta19 would you be willing to file a new bug report for this one? First I’ve heard of this happening. After you see this happen next, you may actually want to contact support here with your warnings.log file. Thanks!