DESCRIBE THE ISSUE IN DETAIL (below). LIMIT TO ONE BUG PER THREAD.
During the course of the Asian campaign*, either the Chinese or the Indian campaign (I have not noticed the problem during the Japanese campaign) some buildings can not be destroyed. They do not prevent from achieving any objectives, but they are an annoyance, especially when you can’t destroy a trading post and replace it with your own.

What was SUPPOSED to happen if the bug you encountered were not present?
The building was supposed to be destroyed completely. 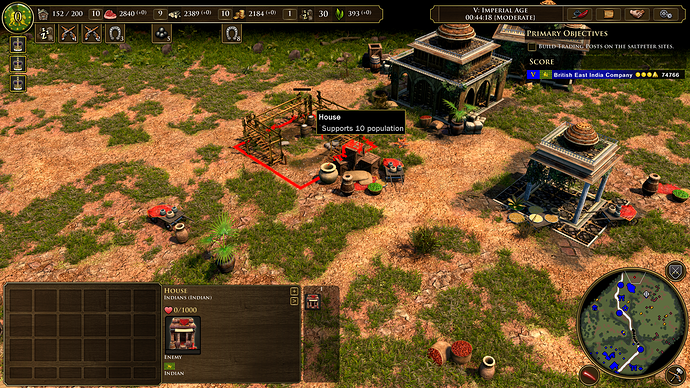 EDIT:
*I had it happen exactly once(tonight) during close to 50 skirmish, and never during the other campaigns, but it seems to be a generalized issue.

1 Like
Indestructible enemy buildings when villager hasn't started to build
SoullessHeathen May 5, 2021, 3:09pm #2

This is not a campaign-only issue, it’s an issue with unbuilt foundations in general.

Yeah, I just had it for the first time in a skirmish. Never happened before tonight. I’ll edit my post.

HI @Viper37 I have forwarded this issue to the relevant team. Do you happen to also have a save game or a rec from the skirmish game where the issue happened? thanks a lot

I have a save game of that skirmish game where it happened, but it’s way before I noticed the problem, so I do not know if it will be of use.

@Viper37 I will have a look thanks!