Swiss Unique Technology for Swiss Pikeman UU and Halberdier. Probably Bloodlines for Infantry, but does not affect Militia line or Eagles.

Why would we add them

Are you seriously questioning the addition of the Papal Guard??

DarthPyro, I fear you will start to question the addition of the Bohemians, the Swiss, the Welsh, the Scots, the Occitaines and the Normandians next, and that is a BIG NO-NO

The issue with that, is that calling someone biased by virtue of nationality, is far easier than actually engaging in the argument.

I have to agree especially when we are at the middle if an exchange. I just think if flags were present to begin with people would tend to be a little more modest.

JonOli is winning! All hail!

They were considered the most beautiful women, by the portuguese

You are being too specific and too broad in the same sentence.
Correct me if I’m wrong, but I believe you mean “They Asian women were considered the most beautiful, by the Barcelosans, the Bejans, the Coimbrans, the Guardans, the Guimaraesans, the Portuenses, the Madeirenses, the Trancosans and the Viseans.” 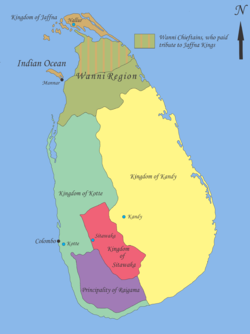 Sri Lanka portal The Vanni chieftaincies or Vanni principalities was a region between Anuradhapura and Jaffna, but also extending to along the eastern coast to Panama and Yala, during the Transitional and Kandyan periods of Sri Lanka. This land was a collection of chieftaincies of principalities that were a collective buffer zone between the Jaffna Kingdom, in the north of Sri Lanka, and the Sinhalese kingdoms in the south. The emergance of these chieftaincies were a direct result of the brea...


This should ideally come under sinhaleese.kingdom of jaffna is fine to be with tamil as it was a vassal of india.

Should afafganistan area also get included here?they were part of indian dynasties/empires and were buddist originally.

The northern Sri Lanka part has tamil population. It was ruled by Sinhala, Tamil and Odia rulers. But I classified it as a Tamil Kingdom according to population inhabiting it. The two Nayak dynasties in the Tamil list are also Telugu but I put it there according to the population. Bengal sultanate had Afghan Nobility ruling but Bengali populace. There is some such discrepancies. But empires/ kingdoms are defined by the culture of population not the dynasty. It is similar to the Sicilian’s case where population is italian+arab but ruled by normans. India is very much comparable to a mini Europe.

Technically Baloochs and Pashtuns are related to Persian culture not Indian culture. Originally Afghans were Zabuls, then became Buddhist then became Muslim.

India is very much comparable to a mini Europe.

That would be an understatement its more diversified than europe.
Personally I feel adding more civis while having “indians” might upset some people in high places that can make decisions.

I remember seeing something similar when I visited thailand.

Yes, the developers decided to make some new style Western European civs, deal with it. Complain about it in any of the dozens of threads about that very subject if you need to. This is a thread about potential Indian and/or South Asian civs. It’s an interesting subject, and there could be an interesting discussion here about which three or so could be picked for a potential DLC. (“Southern Sultanates”? “The 8th Continent”? “From Summits to Sea”? “Camels and Kings”? “Pan Calvus comes up with the dumbest most inaccurate DLC titles”?) Maybe pick 10 if you think three or four new expansions are in order. Not the most realistic of a position game-wise maybe, but whatever. Instead within days this has become yet another shouting match about whether the world really needed the battle of the gulden spurs. Take that ■■■■ somewhere else. Yes it’s totally unfair that India is just as big as Europe but has only one civ or not whatever side you’re arguing on. But this is a place for being constructive.

So, to get back on track: people who know more about the other big Eurasian subcontinent, if AOE2DE does decide to revisit Southern Asia, which of the listed (or any unlisted) civs/empires would be your picks for new additions? Any speculation on units, bonuses, campaigns, heroes? Any new uncommon non-unique units? Or do the existing units like Battle Elephants and Camels cover their Indian counterparts well enough?

Any speculation on units

This is a thread about potential Indian and/or South Asian civs.

So, to get back on track: people who know more about the other big Eurasian subcontinent, if AOE2DE does decide to revisit Southern Asia, which of the listed (or any unlisted) civs/empires would be your picks for new additions? Any speculation on units, bonuses, campaigns, heroes? Any new uncommon non-unique units? Or do the existing units like Battle Elephants and Camels cover their Indian counterparts well enough?

There is so much to the continent apart from just the elephants. There is just a wide range of stuff to choose from apart from the monotonous heavy cavalry civs that we have been getting constantly in a row for the last few expansions. Camels certainly didn’t exist for most of the indian civs. It is one of the reasons why the umbrella Indians civ is more than inaccurate.

Im pretty sure the indian sub continent adopted every kind of weapon avilable from footman to elephants to gunpowder unlike some ingame civis.

Giving historical skins to all the hero units fixes all these.

By using what we seen in the screen shots we can change Briton paladin and french, norman and Burgundian knight skins

Closing this topic because it has gone off-topic too many times and has been used to create dissent within the community.