I don’t think the game needs new civs from a balance perspective, but if there is another expansion, I think it should be focused on India/South Asia.

I don’t know exactly what to call them (Civilizations generally referring to broader groups than individual kingdoms in AoE2) but loosely it seems there is scope for:

Could also represent Mughals as their own kingdom (very different military-- gunpowder focussed like current Indians) but they come in so late into the AOE2 period…?

There would also be room in such an expansion for:

There are lots of campaign possibilities…

Pretty unlikely the current Indian civi will get reworked but future additions might be possible if they dont clash with current indian.
Bengals Ghaznavids make fine additions and wont clash with indian civi,adding tamils might have some issues even tho they should be added.

But yeah they could rename the current Indians to mughals or whatever it is. Gunpowder and camels.

And include another Indian sub continent civ(eg delhi) . Use the same architecture and give the new civ the elephant archer and battle elephant

For the current Indians, peeps on Reddit already recommended a camel gunner. Slower/higher attack delay conquistador type. Which i think is a good idea.

Imo next dlc civs should be meso and “indian”

If Burmese and malay were tweaked out of being one trick ponies we would see them more. But they don’t so the game always feels like there are fewer elephant civs then there actually are.

After Dawn of the Dukes launches, I hope they’ll consider this expansion theme for 2022. Would be very nice.

Guess not clashing with the term indians is no longer an issue.

Women in the Chola Kingdom

The Chola Kingdom was a powerful kingdom of ancient South India. They ruled over the present Tamil Nadu area, and the fertile Kaveri Vall...

imo just adding a uu for the fun it might bring is a big factor, however i think the cholas already have a plethora of uu ideas that could be fun (padhai, urumi, anything with elephants, and my personal favorite although controversial is the chariot), tbh i dont know too much on this subject, but isn’t it just going to be another champion re-work if included?

We only have one female uu so adding another would be good for “representation”.

I like the idea of Padimagalir as a unique unit! Arguably better historically motivated than the Gbeto was in this time period! I was thinking an archer unit though (villaligal)
I think Chola should get a naval unique unit (Colandia) too.

I fleshed out some ideas further here: Some Very Rough Ideas for New South Asian Civs?

The uu can be anything female,heck make the elephant rider female.

Why not? If there can be 3 winged hussars why not 3 female uus?

Why not? If there can be 3 winged hussars why not 3 female uus?

well winged hussars are basically worshipped so not rly a comparison
anyways, i dont think he’s talking about overlap with the gbeto

I know what he means he is saying a uu should be unique not just a “representation”.But having a woman warrior in a mans society is unique.

Winged hussars are a pop cultural unit rather than an accurate uu for polish.poland should have a knight like unit for a uu as they were great heavy cavalry.

Paramavaishnavi Goswamini Devi or Tribhuvana Mahadevi I (Odia: ପ୍ରଥମ ତ୍ରିଭୁବନ ମହାଦେବୀ) was the first female ruler of the Bhaumakara Dynasty in ancient Odisha and the widow of king Santikara I who ascended the throne of Toshali or Utkala between the years 843 A.D to 845 A.D and ruled until 850 A.D after the premature death of her ruling son Subhakara III. Some historians believe that she might have ruled as long as 863 A.D abdicating the throne for her grandson Santikara II after he turned older a...

Sultan Raziyyat-Ud-Dunya Wa Ud-Din (r. 1236–1240), popularly known as Razia Sultana, was a ruler of the Delhi Sultanate in the northern part of the Indian subcontinent. She was the first female Muslim ruler of the subcontinent, and the only female Muslim ruler of Delhi. A daughter of Mamluk Sultan Shamsuddin Iltutmish, Razia administered Delhi during 1231–1232 when her father was busy in the Gwalior campaign. According to a possibly apocryphal legend, impressed by her performance during this ... 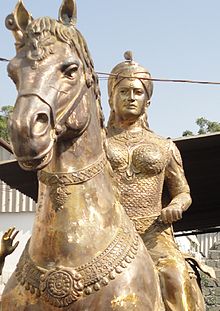 Rudrama Devi (Rudradeva Maharaja, Rudramadevi, Rani Rudrama or Rudrama-devi), was a monarch of the Kakatiya dynasty in the Deccan Plateau from 1263-1289 (or 1295) until her death. She was one of the very few women to rule as monarchs in India and promoted a male image in order to do so. This was a significant change and one that was followed by her successor and also by the later Vijayanagara Empire. Rudrama Devi married Virabhadra, a member of a minor branch of the Chalukya dynasty, probably...

Sultana Chand Bibi (1550–1599 CE) was an Indian Muslim ruler and warrior. She acted as the Regent of Bijapur Sultanate and Ahmednagar Sultanate (in current day Maharashtra.[unreliable source?] Chand Bibi is best known for defending Ahmednagar against the Mughal forces of Emperor Akbar in 1595. Chand Bibi was the daughter of Hussain Nizam Shah I of Ahmednagar,[unreliable source?] and the sister of Burhan Nizam Shah II, the Sultan of Ahmednagar. She was versed in many languages, including Arabi...

Rani Abbakka Chowta was the first Tuluva Queen of Ullal who fought the Portuguese in the later half of the 16th century. She belonged to the Chowta dynasty who ruled over parts of coastal Karnataka (Tulu Nadu), India. Their capital was Puttige.[Note 1] The port town of Ullal served as their subsidiary capital. The Portuguese made several attempts to capture Ullal as it was strategically placed. But Abbakka repulsed each of their attacks for over four decades. For her bravery, she came to be kn...

Queens =/= female warriors.
Many kingdoms had queens or female rulers, but female soldiers on the field are not the same.
Leave “representation” out of this game.

I was suggesting something similar on Reddit :
The indian civ split conundrum - Solution Proposal : aoe2 (reddit.com)

And something similar was suggested before :
Cool Indian cultures and histories that could be added to the game : aoe2 (reddit.com)

I think this 4 civs would be the best split, and it seems people are coming to the same conclusion independantly. Odiyas and Afghans could be possible options too.

I would go the following and use umbrellas for all.
Gaznavids Islamic held indian areas. Current indian tech tree with knight line elephant uu(gun or skirmisher on elephant)
Indian current indians representing indo aryan north. No change to tech tree.
Darvidians south indian cultures. No camels or gun powder units has knight and be line none elephant uu similar to malay tech tree.UU can be anything exotic looking female guards/chariots/urumi.