Intended buff for the portuguese is missing

image695×53 25.5 KB
The screenshot above was taken from the release notes. As you can see, the devs intended to buff this card. However it is unchanged (still 15%).

Screenshot from the game: 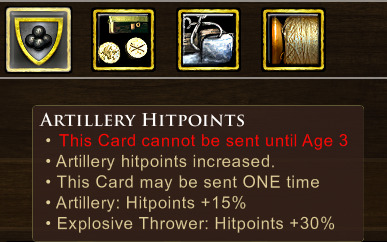 Hi @Beszedits, thanks for posting this thread! This card was made an ordinary (non-team) card due to its strength in the Treaty gamemode where artillery hitpoints are very powerful.

In update 9476, the Portuguese TEAM Artillery card was also made 15% hitpoints, but the Explosive Thrower buff was improved too

I hope this post clears that up for you!

Thank you for the clarification. Case closed then.