I got yelled at in one of the posts where I shared a screenshot of using the tower and TC range mod. Are mods considered cheating? If yes why are mods allowed in ranked games? 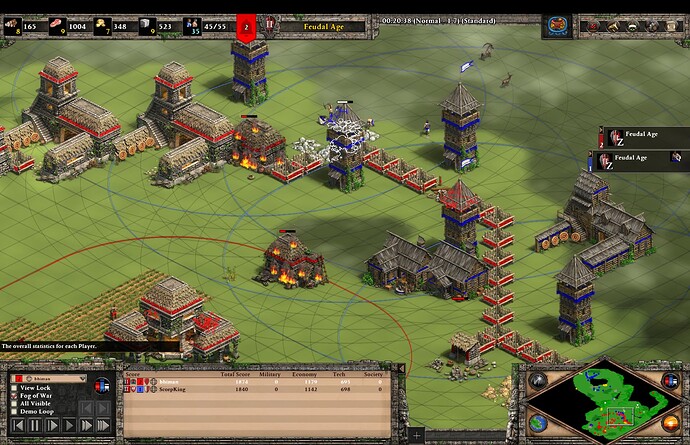 Outside of specific contexts where they’re banned (e.g. some tournaments), no it’s not cheating. You can’t believe everything people say on the internet dot com.

Yeah, ignore what @FreeWinPlz1739 said, if it’s a graphics mod (or any other kind of mod), it’s not cheating. It might be a competitive advantage, but it’s one available to everyone, whether or not they take it is up to them.

People are going to complain, ,for the sake of complaining

They think this is bad, they’re just naive. There’s a mod which shows the range of mangonels, the area it will damage on impact, there’s simple macros for doing multiple commands (attack ground with one click, train Vils with one button) iaw this mod is nothing compared to them when the game gives you the building range in options anyway.

On top of all the visually altering mods for UI and gfx.all of these give the player an advantage.

But people will complain about the most basic one, because they can

I would “yell” at you for using this mod instead the official range mod, which is much better 11

You just go into options, and I think it’s under game settings.

got it, the mod actually just turns these flags on.

The mod you have is completely unnecessary. It creates 4 circles around every building for no upgrade, fletching, bodkin and bracer.

Meanwhile the ingame option already dynamically knows the range and calculates it in real time and only creates 1 circle.

So you can safely unsubcribe the Mandala range mod.

Afaik the mandala mod is accurate though, and the official range mod has slight inaccuracies at the edges or something something like that.

But it’s an official game setting right now, and there are some other popular mods becoming official settings as well (as per roadmap), so no - using mods aren’t considered cheating.

The official range mod was worse only in the first month it was released, then it got updated

I got yelled at

Can you please stop with this histrionic bs?
Everybofy gets salty comments from time to time. And ofc if you chose playstyles that are considered bad manner in certain elo ranges
(Example: Douche/Trush in 800-1200 elo, griefing (in terms of playing completely defensive) in 1200-1600 elo, laming in 1200 - 2 k elo, civ picking in 1800 + elo, just to name a few)
you will get more salty comments. If you can’t stand getting these salty comments you can just play how it is considered good manner in these elo ranges-

It’s your own choice. But don’t complain about getting salty comments if you do something you know others don’t like.

Can you point to me where these rules are? I never have heard of these very specific made-up rules. Do they flash quickly before the ranked match begins?

I can complain about anything I found strange that does not give you the right to preach/judge to me. And no the information you have shared is not common knowledge just made up by you or some people. I asked a fair question if you can answer in a reasonable way then okay if not then i don’t care about your opinion.

Well I once was friend with a girl that thought it was a good idea to talk bad of me when I wasn’t there.
Nowhere where rules prohibiting that.
But I quitted contact with her regardless, she was seemingly quite surprised of that. But yeah, there are unwritten rules. And who breaks them shouldn’t be surprised by the results.

i’m more surprised by the fact that he complains about those who don’t like trushing, all while being a very BM person himself (GG for his opponent, rage quitting, etc). Then again, i’m not sure why this surprises me when we got people who don’t like others laming them, all while smurfing.

IMO, using anything that is not included in the original game option should be considered as cheating. There need to be rules on mod using. I know the word anything sounds too harsh but it is easy to understand so people won’t play with or abuse the rules.

The range mod was added to the game option right now so it might not be a good example here, but it indeed give advantage in the first place to the player who initial the attack.
On the other hand, if using mod is allowed, then I can try a mod that will show enemy location , or a mod that can highlight the unit which is being targeted or attacked. It is hard to argue that if a mod is allowed.

About the neutral mod small trees , I don’t care and I don’t have an opinion. It is not in the original game option and it gives advantage to the player who use it.

On the other hand, if using mod is allowed, then I can try a mod that will show enemy location , or a mod that can highlight the unit which is being targeted or attacked. It is hard to argue that if a mod is allowed.

That literally isn’t possible to mod. The only way you could do it would be third party stuff, which is cheating.

That literally isn’t possible to mod. The only way you could do it would be third party stuff, which is cheating.

Anything is not added to the original game option is the third party.

What I said is that there need to be rules or people can always abuse mod to take advantages over other people. Using mods that can give great advantage to one side will be considered as cheating eventually. Microsoft just don’t care about most of the mods. They left them in the grey area. This is why I would pick Don’t Use Any Mods over Freely Use Any Mod so nobody will attempt to cross the line.

I don’t get using the range indicator mods