Is there a way to hide the win conditions during a game?

I don’t want to have all this text always on screen. Thank you. 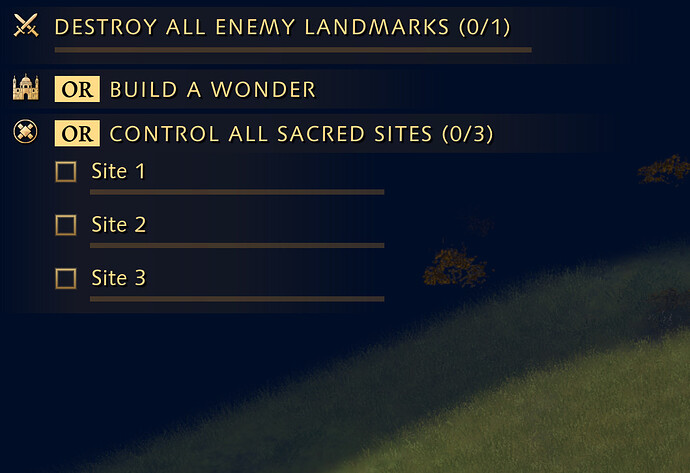 Yes I agree, it is always there as if it is something we should always see! Ok we got it Relic, now you can let us get rid of it. It is way bigger than it should be and turned off.

make it smaller or hide able

They should just show the icons and numbers, most players after a few games know what the objectives are.

Agree. Sometimes I find the conditions text really helpful. For example, when I’m heading to a sacred winning. But if I want to win through destroying my enemy or build a wonder, these information about sacred will only block my screen.
I think the idea of giving a explicit hint of how far it is to win is cool. But the icon and progress bar is enough for a player after a few games, not the text. And in most case only one or two of them are useful in the meanwhile, others can be folded automatically. Introducing some simple rules is enough(e.g. do not show wonder condition when there is no building or built one).
Also the progress bar of destroying the landmarks is actually useless. What players care is “how many landmarks of the opponent i’m attacking still remains”. So instead of put all the opposite landmarks together, it’s more reasonable to split landmarks to each opponent.

Would be nice. It’s annoying to see that all the time

One year later and this is still not possible.

I would be content with at least being able to shrink it.

Either implement the possibility to shrink it or just move it to the menu imo.

They are way too big in font size and taking so much space. All UI needs a re-design as it is not intuitive. Win conditions should be dismissable and also in smaller font without distracting the player. I am a UI designer and I can help @Relic

here’s the solution, let us toggle between this nothing and symbols only mode, was no issue to do for global queue, saying it as someone who worked on UI mods that adjust stuff of this nature

Why are these win conditions still here in 2023? They should be able to be switched off in the campaign, singleplayer, and multiplayer.

Just give us a way to turn it off! Maybe a hotkey in case we want to see it again!