Is this disconnection on purpose?

I just played a ranked game where the opponent disconnected right after losing a critical battle. I was shown this pop-up: 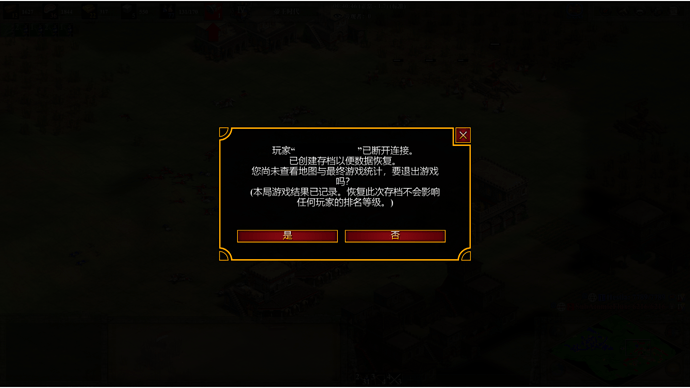 It says, Player “…” has disconnected. A save has been created to be restored. You haven’t viewed the map and stats, do you want to quit? (The result has been recorded. Restoring the save won’t affect ratings.)

The description here is very confusing to me. The result has been recorded? But I don’t have an ELO change. And what’s the difference between selecting YES and NO? (My understanding is, by selecting YES, you don’t view the map, and do a fair restore. By selecting NO, you should not be able to restore?)

I think the only scenario this feature should be applied is lobby games between friends or tournament games, where we actually want to restore. For example, Dragonstar had a crash in the HC4 qualifier vs Vivi. I saw the same pop-up from Vivi’s perspective.

For ranked games, you normally won’t invite a stranger you played to restore a game, so why bother? Instead, it leaves room for abuse.

I have also seen this popup. And I did get ratings increase after that. You can restore games irrespective of whether you have selected Yes or No. The only difference being the ability to see the map and score breakdown.

Just found that I did get the ELO too. But it took some time to update.

I think your enemy just didnt want to resign and disconnected on purpose. But as result you still got your elo. So for me this seems pretty much fine. Nothing to worry about.

Just found that I did get the ELO too. But it took some time to update.

Where did you look? Ingame? This seem to only recalculated after restarting the game.

So right after that game my in-game ELO didn’t change. Then after 1 hour when I re-enter I saw the change. ELO update normally would be shown right after a game in stats page.

Generally, it takes 5 minutes for the elo to update after a disconnect. They do this in case you want to find your opponent again and restore the game from a save.

That makes sense. Thanks!