Italians have a 8% experience penalty for shipment, Bug or intended?

Weird.
If it is for the +2% hp bonus per shipment, why maltese don’t have this penalty?
And 8% is too high imo 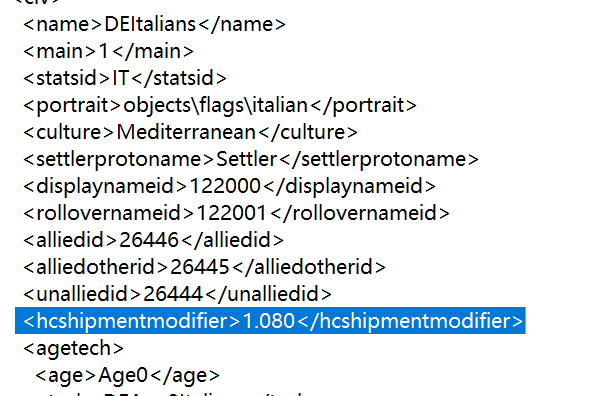 It’s probably a bug stemming from the nerf to African civilizations, I hope the devs fix it soon.

. However, whether it should be that high is an important question for future updates (pending sufficient win rate data and player feedback).

In my opinion: When playing as the Italians, I think the slower XP curve is less noticeable than as other civs with similar XP curves (such as Germans/Indians) - because as Italians, you usually have a Basilica up quite early on to trickle XP, and the Lombards do so too after Uffizi is shipped (which also grants access to a second Basillica). Also, The Architect/Lombards can mitigate the need to ship 700w early on, which most civs use to build early buildings/houses. And you also have a fantastic eco upon hitting up to age 2 (15 vils, 1 Architect worth 2.5 vils, Capitalism worth 2.5 vils, all the market techs, possibly a TP, etc) – in my opinion, this is on par with civs that might ship 5 vils (II) as their first card in age 2. Of course, Italians don’t have that option, but relative to an opponent that does, this feels like you’re a bit ahead of the shipment curve in the early-game, as you don’t need to.

From a gameplay point of view, part of the Italian civ bonus is the Basilica which helps fill in homecity shipment downtime, and playtesting discovered a faster XP curve made this feature feel pretty absent from the early-game as it becomes quite hard to use it if you constantly have HC cards to send. Which would be a shame.

So overall, gameplay/balance, I hope this provides some insight into why it is the way that it is.

agree and also we can train units in the basilica, it makes sense to me the xp penalty

Thanks for your detailed explanation. Interesting to hear how you guys balanced a new civ

From a gameplay point of view, part of the Italian civ bonus is the Basilica which helps fill in homecity shipment downtime, and playtesting discovered a faster XP curve made this feature feel pretty absent from the early-game as it becomes quite hard to use it if you constantly have HC cards to send. Which would be a shame.

Giving my feedback here.
I have been playing mostly Italians since the DLC came out (I’m Italian

).
From my experience, the slower XP curve isn’t noticeable frankly. Instead, I found really hard to choose the right moment for sending papal units without slowing down my game. Obviously, the best move would be to send them as soon as you have sent your last homecity shipment: the problem is that it’s not to take for granted that you have the resources to do so (they are quite expensive and in your early game 300/300/300 are a lot of resources)
Moreover, you should even watch out for XP you are gaining from fights eventually, most of the time causing your shipments to be ready while you are still waiting for the papal units you searched to arrive.
I felt micromanaging the game and the economy was a bit stressful playing as Italians (let’s not forget about Lombards too, I think they should get some UI upgrades, like a counter where you can quickly see how much you have invested in each resource).
So, all things considered, I think the papal units should arrive a bit faster since you can’t speed them up with technologies, only with the Papal Arsenal (IV) card.

With this said, I want to thank you for the incredible work you put into this new DLC, the new maps and civilizations look really unique and detailed.

Yo this kind of dev interaction is awesome, thanks a lot for sharing the mentality behind some of these decisions! I share ChikaraSensei’s thoughts though, when using the Basilica unit shipments it really felt like I was fighting myself because of how often I delayed my main home city shipments. And the best all-rounder in age 2 is naturally the Papal Guard but because their pistol shot can only be used in cover mode in ages 2 and 3 and there’s no way of tracking how long it’ll take to recharge until you send the age 4 card, these things combine to give a kind of bad feeling that’s just in the background. Also late-game Lombards are a nightmare to keep up with, I heard someone suggest an auto-invest button in age 4 or 5 and I’m in love with that idea.