That was before the teasing screenshots. Unless devs wanted to troll hard, it doesn’t have sense to show a mercenary unit to start the marketing process of a DLC.

They should for sure have Argentina and Greece. 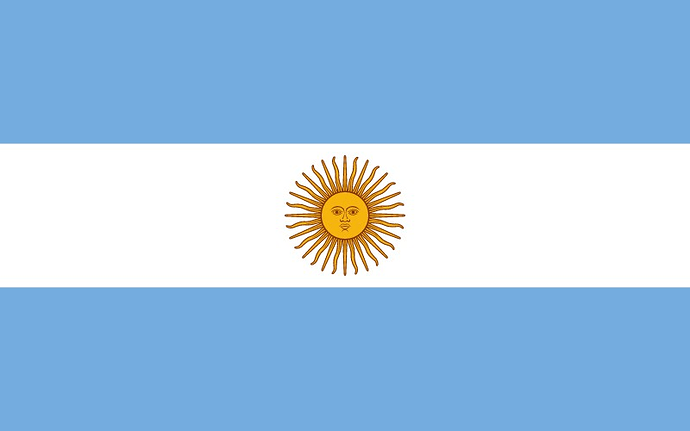 The majority of Argentinians are of Italian descent and there are Italian dialects like Lunfardo spoken there. It’s also an existing revolution so it should be easy to do.

Italian Argentines (Italian: italo-argentini; Spanish: ítalo-argentinos, or tanos in Rioplatense Spanish) are Argentine-born citizens of Italian descent or Italian-born people who reside in Argentina. Italian is the largest ethnic origin of modern Argentines, after the Spanish immigration during the colonial population that had settled in the major migratory movements into Argentina. It is estimated that up to 25 million Argentines have some degree of Italian ancestry (62.5% of the total po Itali... 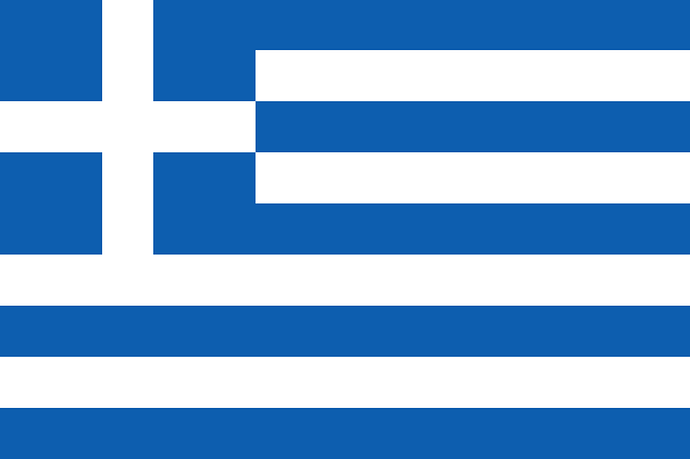 Genoa and Venice had extensive holdings in the Greek islands for much of the time period. Places like Corfu, Chios, and Crete were ruled by Italians.

The Realm or Kingdom of Candia (Italian: Regno di Candia) or Duchy of Candia (Italian: Ducato di Candia) was the official name of Crete during the island's period as an overseas colony of the Republic of Venice, from the initial Venetian conquest in 1205–1212 to its fall to the Ottoman Empire during the Cretan War (1645–1669). The island was at the time and up to the early modern era commonly known as Candia after its capital, Candia or Chandax (modern Heraklion). In modern Greek historiography...

There has also been a Greek population in southern Italy since ancient times.

The Griko people (Greek: Γκρίκο), also known as Grecanici in Calabria, are an ethnic Greek community of Southern Italy. They are found principally in regions of Calabria (Province of Reggio Calabria) and Apulia (peninsula of Salento). The Griko are believed to be remnants of the once large Ancient and Medieval Greek communities of southern Italy (the ancient Magna Graecia region), although there is dispute among scholars as to whether the Griko community A long-standing debate over the origin of...

The Greek revolution is the most significant independence movement missing from the game and with Italy being added, there’s an even stronger case for the inclusion of the Greeks. The revolution would be an option for both Ottomans and Italy.

They could have units like Klephts and Fire Ships. 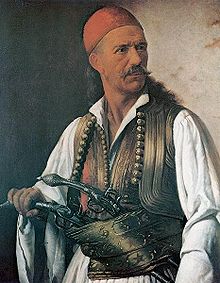 Klephts (/klɛfts/; Greek κλέφτης, kléftis, pl. κλέφτες, kléftes, which means "thieves" and perhaps originally meant just "brigand") were highwaymen turned self-appointed armatoloi, anti-Ottoman insurgents, and warlike mountain-folk who lived in the countryside when Greece was a part of the Ottoman Empire. They were the descendants of Greeks who retreated into the mountains during the 15th century in order to avoid Ottoman rule. They carried on a continuous war against Ottoman rule and The terms k...

The fireships were a weapon of necessity used by the skilled sailors in Greece to a devastating, asymmetric effect during the Greek War of Independence. 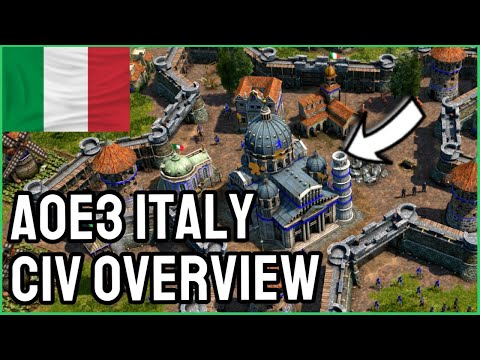 Argentina and barabary states makes sense more or less, brasil and US not much…

Even Barbary states doesn’t make a lot of sense. Italy didn’t get Libya until 1911.

There’s even fire ships now so it’s quite the miss not having Greece.

brasil and US not much…

This is based on the high Italian immigration on those countries

House of Phanar as a “native” post though, there is your Greeks I suppose.

Even Barbary states doesn’t make a lot of sense. Italy didn’t get Libya until 1911.

Yes but south Italy holded some part of North Africa for a bit, although earlier than aoe3 time frame.

And of course, the game doesn’t have a precise end, we just know that it doesn’t include WW1 and what came after, so the libian colony came after.

House of Phanar as a “native” post though, there is your Greeks I suppose.

Yeah, but a Greek revolution could have been cool, and it would have benefit both the Italians and Malta.

This is based on the high Italian immigration on those countries

Yeah but then it’s not a revolution, they could have gone for an unique feature based on the immigration.

But that immigration was almost entirely in the 20th century. There’s twice as many German Americans but Germany doesn’t get a USA revolution option.

Brazil is somewhat passable since the immigration started earlier and was much greater in scale, but USA makes very little sense.

I mean, I guess that all of them makes sense, some more stretched than others, but all in all Italians immigrated in those countries (except for Barbary, that was a colony).

But still, Greece would have been a great and unique revolution for both Italians and Malta, but the game seems to be still pumping out content, so it’s never to late to add them.

Some balkan state too could be good, like Albania…

That Italy has the Berber states is because of the long history and cultural rivalry that Italy had with North Africa since the punic wars or directly as easter egg related to Italian Libya and already, that would not be bad, since it would still be considered within the late chronology of aoe 3 (the one that goes from 1876 to 1914) (that is, practically the entire belle epoque of the imperial age…

Exactly,the only Italian possessions in North Africa before 1911 belonged to Genoa, which had Jijel (Algeria) as well as Tabarka (Tunisia), the latter retaining from 1540 to 1742.

From West to East: 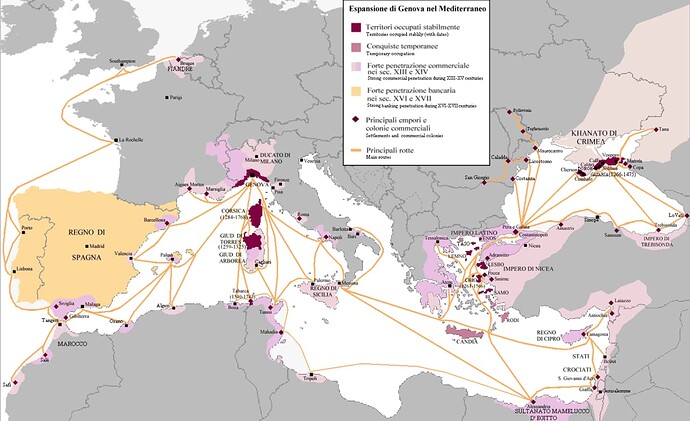 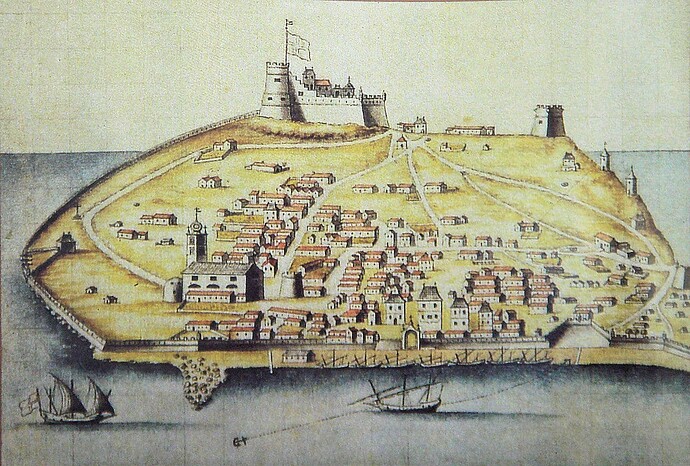 Tabarka island, 17th century. Note to the Genoese flag on the castle.

From 1540 to 1742, the Genoese maintained a garrison on the adjacent island, also called Tabarka, which lies about 365 yards (334 m) off the town. In 1540 the island was given by the Ottoman Bey of Tunis as a concession to the Genoese Lomellini family.[13] The Genoese were in the service of Spain during 1553 at the request of Emperor Charles V who was interested in coral fishing. The Lomellini were part of the circle of Andrea Doria, Doge of Genoa, and were related to the Grimaldi family. The grant was possibly due to a secret ransom for the release of the pirate Turkish Dragut, captured in 1540 by Giannettino Doria, nephew of Andrea Doria. The Lomellini colonized Tabarca with a group of inhabitants of Pegli,[14] near Genoa, where they had various properties and a huge palace. The community of Pegliesi lived in Tabarka for several centuries.

In 1738 due to the exhaustion of the coral reefs and the deterioration of relations with the Arab population a large group of “Tabarchini” moved to San Pietro Island off Sardinia, then uninhabited, where they founded a new town of Carloforte. The transfer was made possible thanks to the King of Sardinia, Charles Emmanuel III of Sardinia who wanted to colonize those of his lands which were not yet inhabited. The name of Carloforte was chosen in honor of the sovereign. Another group of Tabarchini was resettled in the town of Calasetta on the adjacent Island of Sant’Antioco, whose population still speaks a variant of Genoese dialect originating from Tabarka.[15] Others were moved to the Spanish island of New Tabarca.[16] In 1741[citation needed] or 1742,[12] the Genoese fortress surrendered to the (nominally Ottoman but essentially autonomous) Bey of Tunis. At Tabarka, the ruins consists of a pit once used as a church and some fragments of walls which belonged to Christian buildings. There were also two Ottoman Turkish fortresses, one of which has been repaired.

Cultural proximity and interaction from a millenium ago is a terrible justification. Every other revolution is from a colony or subjugated country. The last time that happened was by the Normans.

The couple islands you mentioned and the colonization shortly after the game’s timeframe do give a tenuous case for them. At least Italy has a better claim to Barbary States than USA.

It’s just a shame they didn’t put in the effort to make Greece. It would have been a much better option than USA for Italy or Hungary for Malta.

Yes, that’s why below I gathered more information and put a more reasonable justification…

Hungary’s availability to the Maltese is a reference to the commanderies of the Protestant branch of the Knights Hospitaller in Central Europe.

Exactly,the only Italian possessions in North Africa before 1911 belonged to Genoa, which had Jijel (Algeria) as well as Tabarka (Tunisia), the latter retaining from 1540 to 1742.

Mmm I seem to remember that the kingdom of sicily/normans held the coast of North Africa for a period of time.

They did it again then under the viceroyalty of spain, so I guess that they aren’t that far off…

Argentina and brasil instead are justified because in both fought Italians volunteers and exiles in their revolutions. Most notably, Garibaldi fought in south america, and then fought in the Italian risorgimento.

Really, the only one that doesn’t make a lot of sense is the US… with time I would personally replace it with Greece, a revolution shared with malta and the ottomans.

Yes, but while on argentina and brasil make sense because Italians didn’t just migrate there, but they also participated into wars and revolutions, on the US that didn’t happen.