Jannisaries shouldn't be like this ...They are absolute ''USELESS''

when I have opened ottoman landmark thread, these guys says that ottoman landmarks so awesome but they arent. Ottoman landmarks are the worst landmarks in tne game. Thats so clear when you see other civ landmarks and real landmarks photos. They dont have objective opinion and when so many players says jans are useless, same persons says jans are awesome. They dont want Ottoman reflected best to the game, they want Ottomans reflected bad in the game. They want only their civ best then they always says you are nationalist. But they are nationalist, they dont want to show it but we see it. They know the best and all, you dont know nothing. Even they know the game than pro players.

Lol maybe you are right about it after all. But i don’t want to believe that for sure…Hell no i can’t believe that these people want ottos to be that bad. Its absurd because it is a game we all love to play after all Just a game

And people accusing each other for being ‘‘naturalist’’ is also so damn rude…Stop it…Even if someone calls you in that way don’t fall into same deep%%%%.
For example in aoe 2 DE forums i keep say that Elite Jannies are so strong even they can beat arbalesters and paladins against people asking buff for them.
I personally think that Ottomans units and building design is PERFECT ( great respects to devs )
Yet in aoe4 Jans especially are SUPER UNDERPERFORMING and needs TOTAL REWORK . THATS THAT !
In this forums i kindly beg all people talk in respect each other. Stop accusing people with interestingly absurd things…And trust me devs are cool people and they are intelligent enough to have their work at Microsoft

Love each other guyz.

This it’s not longer a biased opinion it’s the truth , I can recognize the Istanbul observatory miles far , and same with the gold landmark wich btw the inside of the building it’s detailed , the berry landmark has an incredible good looking texture etc , as I said it’s subjective, for most it’s irrelevant , and they don’t care , reminder that this game has stylized graphics , and it won’t look like real life .

It’s subjective , for me looked nice , for u could look bad , about jans , just ask entire discord how they feel with jans

it doesnt matter that janissaries do bonus to cav beacuse they take bonus damage from range you give them something and take something from them you cant compare them in that way they must do more damage my solution once again:

they must make its base attack 22 for normal and 26 for imperial janissary then they must lower to attack to cav to %50 bonus damage so they will do more damage to everthing else and to cavalry they will deal same damage. %50 bonus to cav and %50 more damage from range attacks this is how it must be
second solution lower their gold price at least 20 and increase their range 1.5 case solved goodbye

OMG never seen that kind of PRACTICLE and PERFECT solution.
Personally it would fix Jannies once and for all.
But increase their gold cost to 125g and remove +%50 ranged dmg taken now you got a solid unit.

I’ll admit it. You guys were right. Janissaries are under powered. Barely beat the unit they are supposed to counter. Granted they don’t have a meat shield in front as they would in an actual fight. 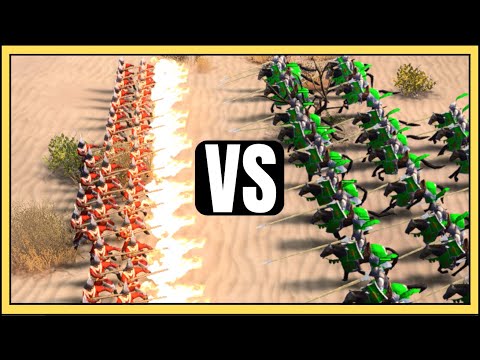 well this is a prime example how NOT to use jannies tbh.

just a few Maa or spears, not even a full line is enough to dramaticly reduce the amount of lost janissaries.

This is because knight charge needs to be negated or else any squishy units even spears get countered.

Not to mention zero kiting was used.

Also these are heavy cav with zero unique upgrades. Jans are extremely hard countered by almost all other units as a payback of ‘‘barely’’ softly countering cav. When u use mass numbers jannies against heavy cavalry u stand a chance but main problem is mass jans are erased in a blink of and eye with 1-2 mangonel shots…U cant dodge because u need to protect your siege with jans. If you retreat then say good-bye to your great bombards.
I always say the same just use xbows and spearmen rather then expensive stupid jans…
This +%50 bonus ranged dmg taken thing is extremely bad idea ( idk what were they thinking? )

Granted they don’t have a meat shield in front as they would in an actual fight.

Just think of few archers or xbows behind these knights…Or just 1 mangonel…
Jans are taking 74 dmg from simple Hand cannoneer shot…
Man jans are crapiest unit in this game…Total garbage…Xbows are 5 times better against almost every situation.

Can some one please tell me Jans hold the line in batte? I mean knights, hre maa can hold the line in battles and player can win but I see and believe that no one can win the battles with jans. If this game share some historical elements, devs should know jans are main force the ottoman army, if jans are bad, ottomans lost the battle so they hold the line and fight with also sword in the battle. Devs dont understand. Jans in the game arent special unit. I dont understand who say jans are fine. They dont play the game or they are talking empty. Jan are … built by devs. Also I see that devs making ottomans civ as spamming units. Spamming units cant win the game as other civs, hre, french, england have unique upgrades and they can easly against how many spam units.

we need more of these videos; but to be fair jans shouldn’t be measured in isolation of Ottoman mehter buff there is absolutely no reason why you would not have at MIN one? in your composition. If anything it’s impressive the jans won at all!! Do the exact same test with JUST crossbows vs knights equal resources I bet the xbows get fuking rekkttttt!!!

wait? you’re willing to consider the knights in composition YET you’re NOT considering Jans in composition? NO mehter? no knights? no spahi? no bombards or mangos of ottoman’s own (otto mango shoot 50% faster than standard mango once full upgraded and manned).

Xbows do really close but the thing is xbows are not extremety super uber hard countered by every projectile in the game and they are cheaper !

Xbows in the same scenario of that video we watched (just in that video) would output almost HALF the dps Jans did (mind you that’s without a mehter too which Ottoman would absolutely have at least 1 in comp even a straight jans army).

I get it that the crossbow is not displaced by the jans; Jans only have the 2 functions (repair and anti cav), Jans are meant to be supportive, never front anything, never running under keeps and other garrisoned defenses; Jans are to be a backline unit shooting at melee (preferably melee cav).

No in the game Jannies are crapiest trash units.

If this game share some historical elements, devs should know jans are main force the ottoman army, if jans are bad, ottomans lost the battle so they hold the line and fight with also sword in the battle

I personally disagree with that one. Janissaries were never main force of Ottoman army. I have been reading your history for about 2 days non stop

Historical information claims that Ottomans main fighting force were Light Cavarly and Bombard Sieges ( both represented as strongest units in game after all )
Janissaries were European captured boys and no empire could stand on this. How many European people could be taken as a captured soldier ??That wouldn’t be enough to make a back bone of world biggest empire for its time. According to historical sources Jannisaries were used as palace guards more often. Timarghi Spakhis were most fierece fighting force in Ottoman Army. And they speak about Akunjis and Delis as a most fearsome warriors of the Turks.Like all other Empires throughout the history Ottomans main fighting force were composed of their own ethnicity i mean Anatolian Turks who served as Thimarji Spakhi and Akunjis not as janisarries.

Jans in the game arent special unit. I dont understand who say jans are fine.

Also I see that devs making ottomans civ as spamming units. Spamming units cant win the game as other civs, hre, french, england have unique upgrades and they can easly against how many spam units.

Jans are garbage and garbage they will be…They aren’t supporting anything especially in late game. If you fill your back line with 3.5 range unit you will be damned ! To be able to shot they need to be close enough to be considered as a melee in that case enemy projectile will vanish them…I dont really understand your point here…They die like nothing else to ANY PROJECTILE in the game ! Why it is so damn hard for u to understand it? Jans ‘‘BARELY’’ does anti cav role. While being extremely hard countered by every unit that is ranged…Before even jannies can ‘‘BARELY’’ kill few cavalry 4-5 random archer or xbow could kill 15-20 jans in a blink of an eye. Thats absurdly broken dmg taken thing kills jannissar concept. But ottomans never need jans just dont use it you will be fine with spear rush spahi follow up xbows + archers then KTS Bombards…
Against mali M@A works fine. After recent patch Ottos are still not good but at least they can hold more.At least playable ! ! !
Jannies range should be improved to 4 range / 5 range for elites.
+%50 ranged dmg should be taken-off complately from Elites! ( %25 for Regular ones maybe acceptable )
their anti cav role should be changed to anti armor role and bonus dmg should be lowered to +12/+20 for elite
+3 Jannissary dmg should be increased to +10 and cost should be increased to 900g 400f
Jannies cost should be 110g 90f ( only then you have a reliable UNIT which works as Hand Cannoneers and even little better which will be historically accurate as ##### 11)
So you can counter Jans as you counter Hand Cannoneers…And still Jans will be weaker then Hand Cannoneers in direct comfront so you dont have to be sad about that

Cavs dont fight in the castles or do other battle things. Cavs cant take the castle and cities. Light cav fight as much they can but it is the point that heavy maa do the main things. At first chistrians are taken to the fight as jans but then everone who want to be jan. So they had outnumbered but they have no qualityto fight. Sipahis were much at 1444 -1600 then they werent so much, tımar system corrupted then they werent so much.1700 -1800 ottomans main land army had jans corps. So ı dont agreeto you.