Credits to Robchang from aoezone, and quote from him: “Waiting for Khmer to lose, KoTD didnt affect the now 13 win streak of Khmer in ro8s of major tournaments at all.” 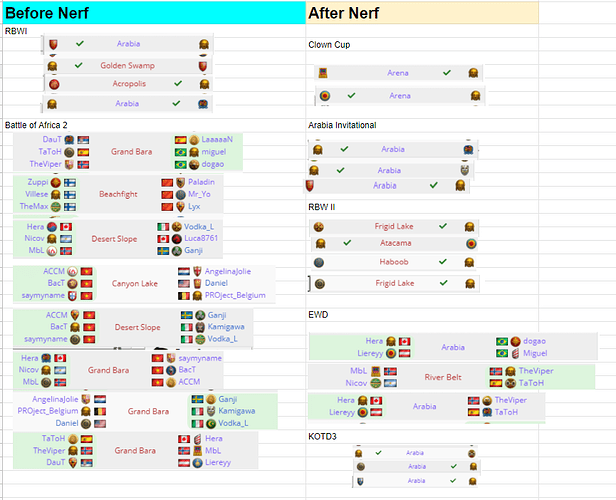 You will unreasonably their Hussars and Cavaliers.

Why do you say unreasonablly? I thought we wanted to nerf Khmer?

Are the Khmer Hussars and Cavaliers the problem?

Maybe. The stupid eco bonus they have make their hussar spam unstoppable (see Lierrey vs yo last game). Altough, I believe it’s the eco bonus that it should be nerfed. Having the strongest fastest elephants can’t be along, with having the best eco in the game

Then tell me what is the problem in your opinion.

Currently they got great farm eco and boom and great Elefants. Which crushes team games.
plus they can spam hussars in lategame trash wars.

If there unit options were worse then we don’t need to nerf their eco as it is a cool feature and I don’t see how to fix it other than nerf their farming into oblivion.

Slower cav gives them a weakness.

Fully agtre with your reasoning that there eco plus hussar and Elefants make them so strong currently but I would suggest going the other direction, leave the eco and nerf what the resources can be spent on (units)

Portuguese have a great general discount but it’s a balances since they got nothing good to spent on (paladin, any FU siege despite BBC, good cav archers, slow champions). I would suggest the same approach for khmers.

Portuguese bonus doesn’t have the same effect, not by near. Not a single civ have a strong bonus as khmer do. Plus, if you want to crippled military options for khmer, you have ro destroy their stable, and make them play Arbalesters (which is still an option for them). Is the eco bonus that’s broken.

I hope they keep the farm bonus.

For team games it seems a bit silly that the

civ with the best food economy is also the

civ with the best elephant civ bonus and UT. I wouldn’t care much if one of the Khmer

bonuses was transferred to another civ, and there’s an argument to be made that ‘extra speed’ should be a UT rather than a civ bonus.

For 1v1s, nerfing the hussar spam would really hurt. It might be necessary. What is the Khmer win condition if they lose their hussar spam?

Remove Hussar, KotD aside (Yo vs Liereey), I have seen instances where pure Hussar spam from Khmer beat paladins. Or if you want their eco to be nerfed i suggest raising the cost of farms for them slightly.

Removing husbardy instead of hussar sinulatiously improves the problem with their overbearing Elefants.

I we keep nerfing their farm bonus their is at some point not much left of a bonus, makigj it all pointless.

They need an eco bonus, but not THAT strong. At this point, I think that they could reduce the farming rate, or make them able to deposit all resources in houses. Anyway, eco is broken

That is not stupid,make 90 farms and you will be able to spam hussars non stop with all civs that have hussar. It wasn’t the civ at that point it was the number of farmers.

The problem with khmer is solely the unparalleled hussar spam due to their amazing food eco. Khmer weren’t known for having amazing cavalry - so it’d make more sense for them to have only light cav. Light cav are still good, and many civs do well with them. Some civs’ hussars are worse than khmer light cav.

In addition to this, it doesn’t really make sense for them to have crop rotation. Since crop rotation only increases the efficiency of turning wood into food, the rate of food collection wont be impacted. However, it will make it harder to constantly churn out food units for eternity. Crop rotation is a super-late game tech, and its benefits only come in after the point where Khmer would already want to be spamming Hussar.

The two fold nerf of removing their hussars and crop rotation would do only one thing: make their late post-imp hussar spam worse. Before their buff, the whole issue with Khmer was that they were strong post imp, but lacked an eco bonus to get there. Lacking that eco bonus, their hussar spam was not an issue.

With their farms, ability to hide, and lack of requiring buildings to age up, Khmer aren’t trying to bide time to get to their power units. Instead, their power is more evenly distributed among every age.

We have to think that this is also a more open map.
So raiding is more easy, except against Khmer, because they can hide in houses. Therefore they can keep a stable econemy without walking (far) away from ressources.

The advantage Khmer have with the farms is: less mills and a bit less way to walk.
You could do the same with slaves, if you have enough farms.

Especially the battle Yo vs. lierrey could have gone either way.
Yo did not raid and switched from mobile to slow units, while lierrey did the opposite.
Even if you would try to raid, it is harder because of the villagers can hide in the houses.

Regarding AoE Stats the Winrate of Khmer is still below 50%. In Ranked Arabia is 49,19%.
Looks fine for me.

Detailed data and statistics, including win rate and play rate, on the Khmer civilization in Age of Empires II in the 1v1 Random Map ladder across all Elo. Current win rate: 48.97%

If they get to strong, I would recommend reducing the garrison space in houses. maybe just 3 instead of 5.

aoestats is less important than round of 8 tournament stats, that’s for sure.