Here you go Devs, the obvious-as-day minor Inca nerfs that are desperately needed:

-Kancha resource collection trickle is untouched and therefore still huge
-Blind FF is no longer risk-free, extremely easy to pull off, and extremely rewarding simultaneously but still great
-Blind Native rush on most maps is no longer auto-gg, but still extremely viable
-Forts are no longer completely invincible yet still tough as nails and can be garrisoned inside of

Excellent common sense suggestions, this will put Inca in their place without making them weak by any means.

I have played inca hundreds of matches. Huaraca is so strong that FF is extremely difficult to deal with.
Let’s tag heavy infantry for the huaraca. they would be easily counterattacked by light infantry.
Also, to be more fair to the inca players, we should remove the infantry tag or do something similar to make it easier for this unit to deal with artillery.

Here’s a better idea : how about no?

Grenadier is also a heavy infantry unit, which is easily defeated by all melee cavalry.

Another possible nerf, is to reduce the population of the kallanka from 10 to 5. Much of the FF of kallankas depends on the 20 pop that the 2 kallankas offer.

which is why grenadiers are a useless unit. see how solado are grens that also counter cavalry are magically useful? funny how the right unit tags and multipliers makes a unit useful

but nope, let’s make every kallanka unit heavy infantry, all 3 of them, that way they can never use them lategame just like aztecs useless units. great plan

As an inca main with probably 1K matches of just inca I obviously strongly disagree.

If anything needs to be nerfed it’s possibly the fast native rush which the devs knowingly made better by changing 2 war hut age up to 2 tambos. If you were trying to FF then the 2 war huts were useful in preventing any early game aggression.

Kanchas were already increased by a huge amount from 135 to like 180, ridiculous to increase the cost anymore, it already costs an extra 400 wood to complete the kancha boom than it did before.
Kancha HP is fine for their cost if anything it should be more just look at brit manor hp for it’s cost, not to mention there’s a lot less of them and easier to focus down.

Huaracas and bolas are absolutely fine, the huaracas can’t even decently deal with artillery, inca are very weak to any kind of artillery as it is. Huaracas were op in age 2 but that got nerfed into oblivion.
Inca forts HP is also fine and the building hp card was already nerfed into a team card to lower the maximum total HP you could achieve.

Only thing I agree with is increasing tambo build time to nerf the native rush a little.

The Inca FF is way too powerful for what it is. If you don’t think they should Huaracas (which are the main issue at the moment with the infinite send cards you get in age 3 among others) then you have to give somewhere, and that’s why I suggested the kancha. You can’t call the Kancha wood cost increase from the Inca rework patch a “nerf” because the entire civ has been buffed more than sufficiently eco-wise elsewhere to compensate. Instead of relying on kanchas alone, they now have a decent settler population to take care of their eco. Less dependency on Kanchas and settler cards means a noticeably better eco overall.

So no, huaracas are not fine - they are abus with extra range and siege damage capable of properly taking out buildings and artillery alike (unlike abus). They deal siege damage, yet have very high range, and have high siege and siege range. Abus on the other hand have a low rate of fire, low HP per pop, no siege damage, and the lowest range in the game - all while costing more resources than a huaraca.

The Inca FF is like the Ports FF before the nerf, you can’t keep saying “oh but they had other nerfs so they’re good now”. It doesn’t work that way.

The villager cards were just bringing their eco to more of a standard level, max kancha houses is only worth like 12 vills on food and they had no vill cards, compare that to brit or dutch both have vill cards and eco booms worth an additional 20 villagers. Uhuh.

Huaracas are fine and you’re comparing a skirmisher equivalent with a siege unit. Abus synergize very well with janissarys and are incredibly strong early game, only late game do they become less useful due to their 2 pop cost but they’re still basically skirmishers that do siege damage and can pick off a falc quickly. Huaracas are ok vs buildings though not on the level of falconets, they are incas primary anti-artillery unit yet get out ranged by falconets and destroyed by them, their range is poor and their animation is trash tier.

Yeah no, you can get out Huaracas with Bolas faster than you can verse a pack of falconets. If the falconets aren’t there, they will stand their ground against muskets - a unit neither bolas or huaracas are “meant” to counter.

What’s your rank? A thousand games means nothing if you’re still an MS.

Many units counter things they aren’t meant to counter, nobody makes huaracas to counter muskets anyway when you have jungle bowmen, they also cost more than muskets I’d expect them to win.

My rank is 1729 as of yesterday, not that rank has anything to do with a persons knowledge of the game and calling people out on rank is a very toxic attitude, I have many friends who play over 10 years and they know everything about the game, just because they play for fun or like to do dumb ■■■■ doesn’t make them any less knowledgeable than someone 400 elo higher that plays every day.

Calm down there buddy, I wasn’t implying you were an MS. I can just read through your heavy bias in defending a clearly overpowered civ. If Inca gets away slightly with a turtle, it’s auto-gg. Native rush? Auto-gg. FF in 6 minutes? expect 15 huaraca and 15 bolas within a minute and then full batches thereafter, for auto-gg. If not then the cards will make up for it in no time.

dansil92 and I experimented with replacing Kancha’s Food/Wood trickle with spawning 2 unfattened llamas, and it made the civ far more diverse. You can go for Disco Llamas with Llama Lifestyle early on (Community Plazas might need less HP since you can’t actually kill the Llamas without Villagers nearby), eat the llamas for some rush potential, or fatten them up to boom with and swap them for Gold. It’s far more interesting than “lol, houses go brrrrr.”

I’d honestly just turn Huaraca into Shock Infantry and change their damage type to melee from ranged. They’d no longer counter Musketeers and Dragoons (and be in turn countered by them), but they’d still dump on skirms and artillery, which should be their main usage. They could still have a useful siege attack, since Inca doesn’t have any reliable long-range siege options otherwise. Stats would need a rebalance (more speed, less base range, adjusted multipliers), but it feels far less cheesy than what we have now.

The Fort I’m meh on as I haven’t used in a while, so I’m not sure with the balance changes, but they should be fine. Maybe lower the garrison cap a bit instead of touching the HP, so it’d deal less damage (and military units garrisoning inside of buildings is cheesy anyway).

But yeah, these are radical changes to the civ design, and I think your suggestions are “safer” and reasonable nerfs to Inca 2.0.

Rank doesn’t really matter in DE. We don’t have progression like in Legacy, and you can just rack in FREELO by playing whatever flavor of the month OP civ we have in matchmaking. There’s no lobby-based system, so good luck not finding Inca/Mexico lamers, lol.

The inca lammers have all disappeared. They don’t want to risk getting beat by mexico apparently. Over the last several days 3/4 of my matches are mexico. Can’t recall a single inca. When you lame you go all the way.

I don’t know if Huraca as shock infantry is for the best, but I’m all for getting rid of Kancha trickles. Factory houses are the pinnacle of lame.

Resource generating buildings should be limited to expensive single purpose buildings like banks. Incas even have something that would make sense for this: 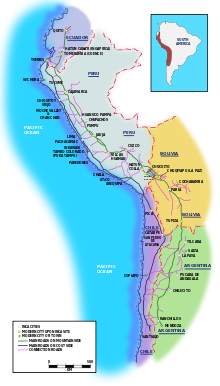 A qullqa (Quechua pronunciation: [ˈqʊʎˌqa] "deposit, storehouse"; (spelling variants: colca, collca, qolca, qollca) was a storage building found along roads and near the cities and political centers of the Inca Empire. To a "prodigious [extent] unprecedented in the annals of world prehistory" the Incas stored food and other commodities which could be distributed to their armies, officials, conscripted laborers, and, in times of need, to the populace. The uncertainty of agriculture at the h The p...

It could generate all resources or have the ability to switch between so they wouldn’t need the out of place estate trickle either.