Unfortunately people in Europe cannot join or see hosted games from let’s say West US, we are region still locked when it comes to far away hosted games, which shouldn’t be the case for lobbies where laggy players are managed inside the lobby as per host decision.
This prevents certain people to play custom game with their friends from around the world regardless of the latency which is really annoying.
All this shouldn’t be the case, lobbies should not be region locked at all, the host would decide which players to kick if too laggy.

See screenshot - couldn’t cover all hosted games, but apart from one from East US and one from Korea, all are from Western Europe, which shouldn’t be the case. I’ve got friends in US saying they barely see any Europe servers either: 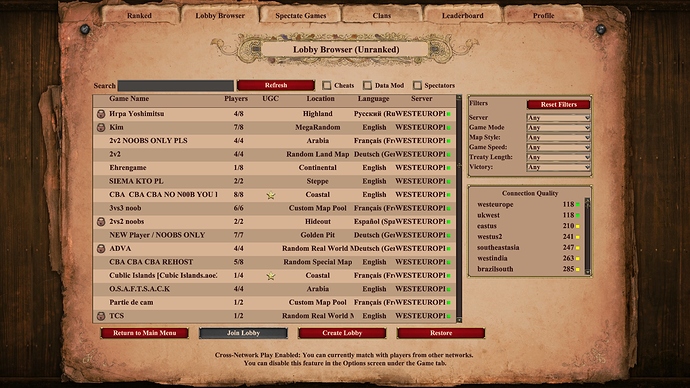 I’m using Steam as well as my friends.

How long have you been seeing this happen @IamDalv ?

If you specifically select West US as the region to search in, what do you see?

This has been hapenning since latest patch (before that I could only see games hosted in my region) that was supposed to remove the region lock compeltely for lobbies.
If I select West US there are 0 hosted games to be seen. 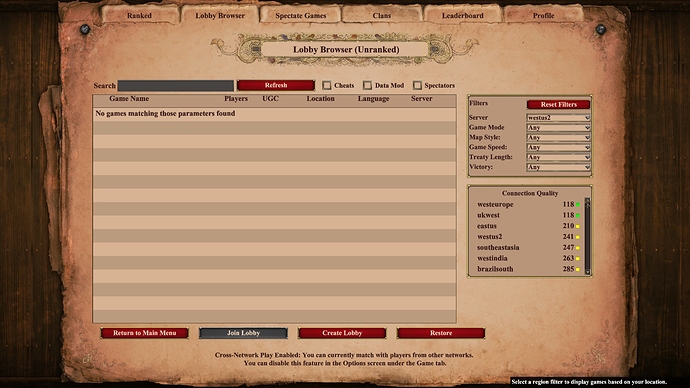 What patch # are you? Does the same thing happen if you choose other regions?

I have checked all the other regions, and apart from WestEurope (my region) right now there are 0 games to be seen either. Ocassionaly there is one or two from other regions, like once in a serious while, that’s it.