Lords of the west disabled

For some reason after the latest update yesterday, the Lords of the West campaign section is grayed out. 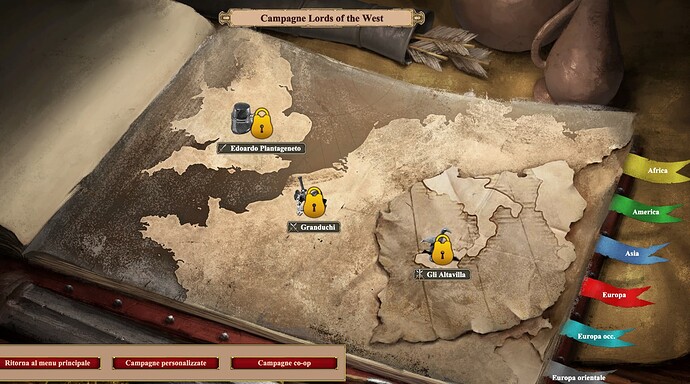 i bought the dlc long ago. i can still access the civs in skirmish. any idea?

If by “latest update” you mean "Yesterday’s PuP update then you should post this on the PuP forums on Steam.

Pardon my ignorance, yesterday aoe 2 in the main menu had a message saying there was going to be manteniance. i assumed it was some sort of update.
What is PuP from steam? i’m not familiar with that term.

Oh maintenance isn’t technically an update, it’s just, well, maintenance of the servers for multiplayer. As of the PuP it stands for Public Update Preview and it’s basically the beta of the next version, available on Steam. Right click on the game’s name in Steam, click on “Properties” and go to the Beta tab.

For your problem I suppose you could try verifying the game’s files or disabling then re-enabling the DLC to see whether things come back in order.

You said verify the game files, reinstalling the game and reenabling the dlc, none of these proved to be a solution. Any other ideas? where are these files supposed to be ?

Technically everyone has the DLC files, it’s just that having the DLC in Steam enables you to play the civs/campaigns. I have no idea what else to do, besides sending a message to the AoE and Steam support.

i have it, its checked, i even disabled it, redownloaded it, still it says i dont have it installed. i think i might have accidentally changed the extension of the file while i was looking for custom maps .
If anyone could tell me what is the exact name of the files that compose the lords of the west campaign, i can see if these are the ones that i accidentally changed.

I did. no difference .

i think i might have accidentally changed the extension of the file while i was looking for custom maps .

Not that easy. Even if you did mess up one of them by mistake, they have all been disabled. Also, what are the chances you could mess up the files for all three LotW campaigns, yet none of the base game ones? I think something did go wrong with the LotW content somewhere for you, I just don’t think that messing with the extensions on a .cam or .json file used for the campaign would break it like that.

i have contacted the support, and to be fair it seems to me they are as confused as i am .

we shall see if they can mange to solve this issue.

You have probably modified the campaign files. Try to delete them or uninstall.

i would try that. but i dont know wich ones are the right ones ! and uninstalling and reinstalling solved nothing.