Any feedback from the Developers please?

Exact same thing here. Game crashes in the blink of an eye, no warning, straight to desktop. Happens during multiplayer matches around the 25-30 minute mark 99% of the time.

No feedback, they just took our money and disappeared. I have never been played well this game right since it was released.

Could you people please chill on that anxious demand and gather a bit of common sense? After launching the last update they also announced that it would be their last activity on the year.

The people who work on the game also deserve to enjoy the holiday recess, it’s the last week of the year! Stay cool for some weeks. I know it can be frustrating to stick with some issues around, but I also know that everyone here can deal with that for a while.

First, I am also experiencing this. It seems to happen a lot around reaching castle age.

Second, dededoritos, I think you need to chill. People paid money; they want a functioning product. It is not an unreasonable thing to be annoyed about. It also discourages people from joining or playing if they are all afraid that they will be crashed midgame, so it hurts the community at large for that problem to persist.

As to the devs, they absolutely deserve a Christmas holiday and I am certain they will get it, and I have not seen anyone disagree with that sentiment. If a few people are frustrated or feel unheard, that is to be expected out of thousands of players. To them I say: the devs know. They are already working on it. Computers are weird. I have also expressed vexation on other issues, and I have had to reign in my frustration too.

To any developer reading any of this, thanks for keeping up with the community, and thanks for the updates. Merry Christmas.

i have that problem too

Don’t get me wrong, I’m a big critic to the lack of responsiviness by the dev team on the game issues — just look for my post historic. I have been experiencing these problems as well, and I also want a functioning product. But I honestly think that to insist in this recurrent approach on the last week, of every day asking for a response from the dev team on ‘X’ and then laming on them for not responding, is so unconscious and counter-productive given the time of year we are and their announcement on suspending activities.

I just ask for everyone to keep their cool and take in consideration the very situation of holiday recess in what we are right now, instead of being disappointed every day by the lack of an answer that wasn’t supposed to happen anyways.

Edit: Just so everyone know from a official source:

Is this a joke?

The community team announced that there is another game update coming after the holidays which should resolve the crash issues with the current update.

Fair enough. Just so people are not transitioning from getting unduly upset at the devs into squabbling with each other. Merry Christmas dededoritos.

Merry Christmas to you too, and everyone else!!

The same happened to me today…was winning and the game crashed to desktop.

Just had one of these crashes. How do I report the crash, since there is an event with details in event viewer which might help devs?

Hello everyone! If you have not already, we have a bunch of troubleshooting steps for game crashes over on our support page: https://www.ageofempires.com/support/aoe2/#crash-after-launch If you have not already, try working through the steps there to see if any of them work for you. Please let us know which (if any do), or include the following information if they do not: Your basic DXdiag information (OS, RAM, Video Card, etc.) Any error messages you receive. A screenshot or video of the i…

the holidays are over! the crashes are still happening. now i get “network error” randomly while my network is working just fine for everything else! the game freezes. i get the “wait for the program to respond” prompt. i click wait. then it becomes a black screen. then after a couple of minutes " networ error"

When is the crash fix coming?

The best we can do is share what is happening… I’m leaving my review at Steam right now, so people thinks twice before buying this.

everything was working fine. in ranked game, no lag, no anything. game froze then half a second later it just closed itself with no warning.
that dll is famous for causing application crashes 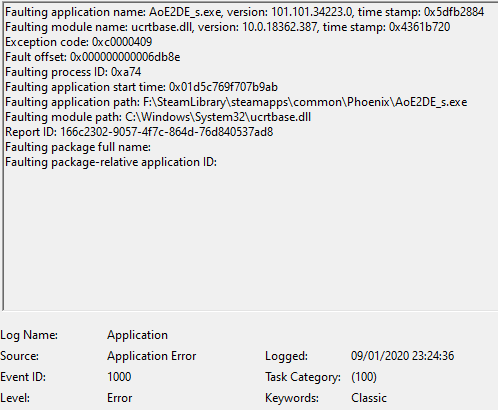 I had 4 crashes in the past 2 days now. As soon as I hit Imperial Age I get dropped. I think these people need to get this game out of the Beta stage already. Totally an unfinished product and we are 2 months into the games launch.

I had a similar crash today where when I reached Imperial Age, my game just crashed. Feelsbad cos I was in such a big lead 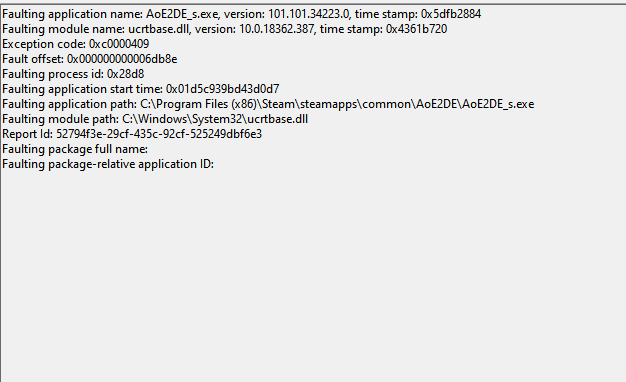 No feedback, they just took our money and disappeared.

What about all the updates and hotfixes?