All the changes from the PUP are in, with some modifications:

The changes to the Temple of Heaven are intended to address a prevalent gameplay issue in the Treaty game mode where it was possible to get well above the 99 Villager limit which contributed towards the Chinese civilization’s economy being more productive than felt fair.

Thank you for this epic update/event, Chinese cultural event, this is brilliant. I wish we had the same kind of cultiral/civ events for DE2 as well. De2 Events usually suck. Completely void of imagination and vision.
Please go aid the DE2 devs and show them how to make proper events.
(And please someone ,give us more content / improvements for DE1 as well. Events, more civs and regional unit skins please)

Great update, actually agree with almost anything. Only strange change is removing schooners from the inca, seems a weird one that nobody was asking for now inca will never be used on water.

One feedback, revert the french consulate changes, it being all available in age 2 is much better tbh

I think I’ve never praised the developers who did the artwork/design.
I’ve noticed the cards have got considerably better and better at quality and design ever since that patch with new cards for Aztecs.

I’m really digging into these bright colors because we can actually see what is printed in the cards (some legacy cards don’t present lines or definitions at all, we can’t see what they are in-game, they look like smeared paints

)
So yeah: you guys have been doing a great work!

And it’s not being unnoticed! Those new Chinese cards are lit

Awesome seeing China as well as problematic meta civilizations being addressed.
Any chance of us seeing the viability of forgotten things in legacy this year?

It’s just so rewarding continuously seeing a new map every month! And seeing that you folks take the time to look into making some maps more balanced really pays off.
I think this is as good as adding brand new maps (but with much less effort) so you always manage to bring something “old new” or “brand new” to D.E. every month and keep the game fresh.

very low fps when i update this patch.i hope this issues will been processed as soon as possible.

Could anyone advise how to unlock the accomplishment for the Chinese armies from academy, castle and home city shipments?

In other words, cheese it.

Do what FiveWind said. The 5 deck cards are the Mandarin Duck squad in Age 2, Iron Cap Princes’ Army and Beiyang Army in Age 3, and Emperor’s Army and Ever Victorious Army in Age 4

Could you do a screenshot?

They re the military shipments that has “army” in their name. They have banner armies flags. 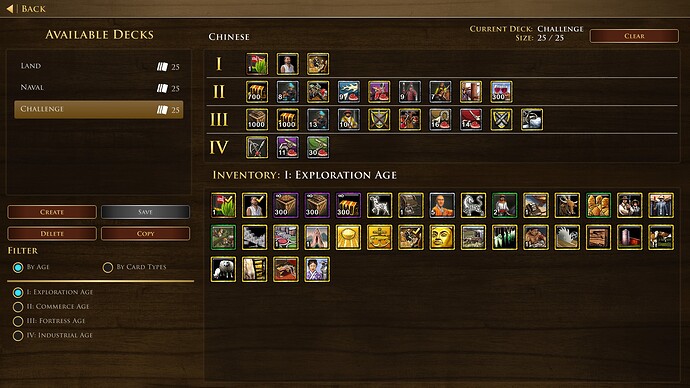 other than mandarin duck squad, that 1 doesn’t have army in the name, does have the usual banner though.

I’m stuck at 12/13, for some reason I can’t get it to register. I’ve played more than one match now in which I definitely deployed all 13 armies. I built the custom deck and everything. Even validated the files in Steam, as someone on the Steam forums mentioned that, but still no luck.

Make sure you are using the five deck cards listed above. New Army in age 2 and the merc army in age 4 do not count.

Oh gosh, that was it, I had the Merc Army. Thanks!