As we all waiting for the new upcoming patch, I could see on a German stream the change of Magyars 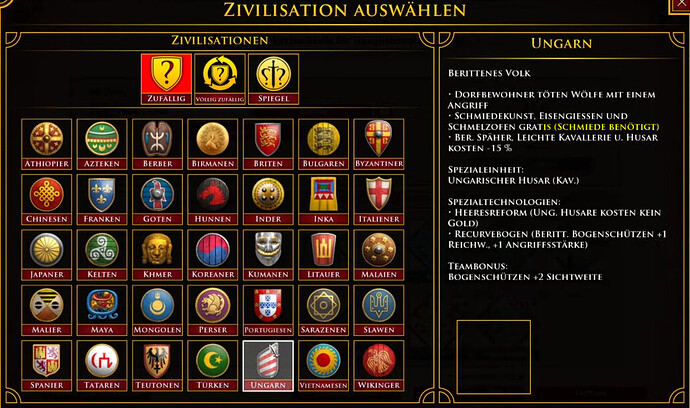 So if the leak is true, you won’t get immadiately the attack bonus after reaching feudal. First you need to build the blacksmith to get the attack upgrade instead of 3 farms with the wood cost.

That’s pretty bad for Magyar. Do they get anything in exchange?

Disgusting change. This can’t be true.

I play with the german client. the “schmiede benötigt” part was always there, its basicially just an error in the german tooltip.

Good. I would be really mad if they nerfed Magyars.

And what is the problem with that? This will not change anything, yeah maybe this will make your scout rush less more effective if you didn’t have your blacksmith but Magyars will still fine since this free +1 attack blacksmith upgrade is no joke, so it is fine to delay it a little bit in early feudal scout rush to have more wood and i think you will be able to get your wood before you start sending your scouts

I hope it is true. Then at least the dev notice it and fix the language mistake for the next patch.

Well at least it is not that huge error. In the spanish versión of the game for example, the English UT says +1 range for cav archers instead of foot archers.But that error is only in the tech tree not in the castle icon

This will not change anything

Feudal Scout rush will get nerfed with that

And what is the problem with that?

The problem is that Magyar right now are in a good spot, but probably more on the weaker side of viable civs (not much going for them basically from late Feudal Age until mid Imp). So a nerf would be a terrible choice, since it would turn them into a trash tier civ.

And yes, this change would be big, as a strong Scout rush is basically everything they have to offer - other than that they play like a generic civ with a decent tech tree. Only their post Imp is very good too.
So their Scout rush needs to be extremely good to carry them. Having a very strong scout rush without needing to invest a lot into it is strong. Needing to build a Blacksmith would make it a lot worse and just very slightly stronger than a generic Scout rush.

This translation “error” exists because in HD Magyars needed to build Blacksmith for free techs and had -%10 reduction to scout cavalry line. Also in HD they buffed Magyars made it -%15 cost reduction and no blacksmith needed for free techs.

You will always build blacksmith at some point so I don’t think it’s huge problem even Devs nerf it.

Another abomination if is true lol

With the potential buff for cavalry archers and the new Tatar buff, the Tatars gonna be a bit scary

And what is the relation between fixing the CA in general with free thumb ring or Tatars or even this post?! The CA have a problem even free TR will not change the problem, an Tatars with their free TR is not a big deal because every archers civ and CA civ can have it once they hit the castle so what is the big deal here except 300f/200w for free?! When we are talking about Tatars in general we mean that they need something unique for their CA as any CA civ and that does not mean free techs, Mongols CA can beat Tatars CA in castle age without even TR.