Basically, add them to the Portuguese, Spanish and Turks which is both historically accurate and helps 2 of the weakest civs in the game (and Spanish are average so they wouldn’t become OP).
Then remove the civ bonus from Berbers (while still letting them train Genitours) and add a new teambonus.

4 bellow to average civs would get buffed with one simple trick!

No,
But if we talk about historical accuracy:
The berbers never had genitours, genitours is a spanish term for mounted skirmisher, if anyone should have them available it was the spanish,
Or atleast Berbers should have them under a diffrent name.
Also you cant just give random civs a random UU, trashing Berbers TB when allied with these civs and call it “Balance” 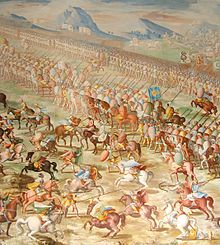 Jinete (Spanish pronunciation: [xiˈnete]) is Spanish for "horseman", especially in the context of light cavalry. The word Jinete (of Berber zenata) designates, in Castilian and the Provençal dialect of Occitan language, those who show great skill and riding especially if this relates to their work. In Portuguese, it is spelled ginete. The term jennet for a small Spanish horse has the same source. As a military term, jinete (also spelled ginete or genitour) means a Spanish light horseman armed w...

Or atleast Berbers should have them under a diffrent name.

Basically, add them to the Portuguese, Spanish and Turks which is both historically accurate and helps 2 of the weakest civs in the game

Think its a great idea.

But what realistic TB could berbers get?

Also afaik genitours are underrated and not that heavily used as it is… Would definitely see more use for turks and Spanish but not sure of the rest.

I like it. Not a needed change at all but I’m on for more historical accuracy if it doesn’t break gameplay.

I would change their name though. Maybe mounted javalineer or mounted skirmisher since genitour is too related to spain and portugal.

give genitours to ports spain and turks

nerf their base attack by 1 damage, to keep the current balance unchanged.

I like the idea. This, maybe combined with a slight buff to hand cannoneers (lengthly discussion here: Hand Cannoneers bad state confirmed), would benefit Portuguese, Spanish and Turks without changing the general character of those civs.

It also addressess the often heard complaint that Turks have no viable trash units.

The only risk is that it adds too much for Spanish, which is already an average civ and strong on closed maps like BF.

I would like to see more Genitours on the field!

I think this is a nice way to handle it! Only one thing:

Not sure how well this would work. Maybe Berber Castle tech (Rock the Kasbah) could become their team bonus instead since it’s no crazier then Hun or Briton bonuses. Then add a new castle age tech, maybe something to buff their navy? Since they are a “Cavalry and Naval Civilization” but don’t actually have a very standout navy lol. Perhaps a weaker version of shipwright (which they don’t get). It could look like this:

Obviously long run Shipwright is better, but this could give Berber navy an earlier boost in Castle Age, and along with faster speed could allow them to amass ships and pick their fights.

But what realistic TB could berbers get?

i really like this one, but free eskirms is also cool

historically accurate and helps 2 of the weakest civs in the game (and Spanish are average so they wouldn’t become OP).

I actually disagree, because Genitour is a UU and not a shared unit unless you have Berber ally.

Also, then again, historical accuracy is always good. But a rebalance is a better option

Genitour is a UU and not a shared unit unless you have Berber ally.

The idea is to make it a non- unique unit. This would be fixing for turks, which finally would have a reason to exist.

Also Portuguese and Spanish would see a small help.

If needed the name could be reworked in mounted skyrm

Genitor for turks could fill that empty trash unit they need, other civs don’t really need it.

Ports don’t need genitor, in fact ports could use as civ unit the condotiero.

Genitor for turks could fill that empty trash unit they need, other civs don’t really need it.

For turks it would be very useful

Ports don’t need genitor, in fact ports could use as civ unit the condotiero.

Condos are more difficult to share imo. Moreover Portuguese are already similar to Italians. If Portuguese was given condos, I would remove it from italians

At first it sounds good, but I’m not too sure. Requiring a castle for only a “half shipwright” naval push does not make it a faster or better naval push than other civs you would pick on hybrid/water maps. What about this?

Oh yeah I think that could work too! 10% faster docks would really be a awesome team bonus on water maps. I would definitely like to see one of their bonuses helping their navy in some way. My suggestion wasn’t necessarily to get them a replacement for shipwright, but rather give them a long term improved navy over what they currently have, I’m certainly not married to that suggestion.

I like the idea of Berbers having reduced frame delay on genitours, could make them a very interesting unit for micro.

I think your suggestions make a lot of sense!

The idea is to make it a non- unique unit. This would be fixing for turks, which finally would have a reason to exist.

I understand that, but what I mean is: It will turn Berbers’ own UU into a shared unit and breaks the 2 UU rule for every civ

Berber’s UU is the Camel Archer. @AnoniKira’s suggestion is to make the Genitour a non-unique unit, like the Steppe Lancer, Camel Rider or Battle Elephant. I don’t see which “rule” it would violate.

I think its fine for Portuguese and Turks. But this may boost Spanish in trash war greatly. Given Spanish has supremacy and it is the only civ that have access to all FU trash unit. It may be fine if Spanish miss the elite upgrade.