Make your voice heard with the Age of Empires Community Survey!

The community is the future of Age of Empires, and we want to know your thoughts! Take the survey here:

Done it!
Nice to see you guys coming up with an official survey, hope there’s more to come!

@Plus2Joe @GMEvangelos Please send an invite via email to all Age of Empires Insiders who have been patiently waiting for this sort of thing.

Great survey!
You will publish the results later?

Completed! I cannot wait for other news

@Plus2Joe Thanks guys. Some of us were losing hope ( Not me though)…so it is good to hear from you all

Attempted the survey but it immediately ended after saying I am over 18 and not working at Microsoft. I am a bit confused?

Hey @nottudwill! Our team identified an issue which prevented people from completing the survey and have implemented a fix. Give it another try in a new browser, or clear the cache and cookies in the browser where you first accessed the survey to run through it again!

Thanks for the report, and please let us know if you run into any other issues!

Thanks - I have completed the survey now.

Done a while back, but all the same.

I am really glad to see you guys take this sort of initiative to get user feedback. The last week or two has shown very encouraging signs in a rebirth of community engagement that is really vital to customer retention and force multiplying business success. KEEP IT UP!

I would say a recent example of a company taking and using user feedback is Creative Assembly with the newly released Total War: Three Kingdoms. It’s a massive success and many people say it’s the best Total War game to date, and this was in part because they made good use of user feedback and players got the changes and game they wanted. Kudos to them!

For those interested in participating, note that you have until Noon PDT this Wednesday (about 24 hours from this post) to complete the survey before it is closed down. If you have not already, be sure to weigh in with your thoughts so they can be included in our final reporting to the development teams.

Thanks for participating; we look forward to hearing what you think!

Survey is closed! A HUGE thanks to everyone who participated; we can’t wait to read through all of your thoughts, feedback, and ideas for the Age game(s) you love and gaming as a whole!

Any chance we’ll be able to see the results as well like in the former community survey? 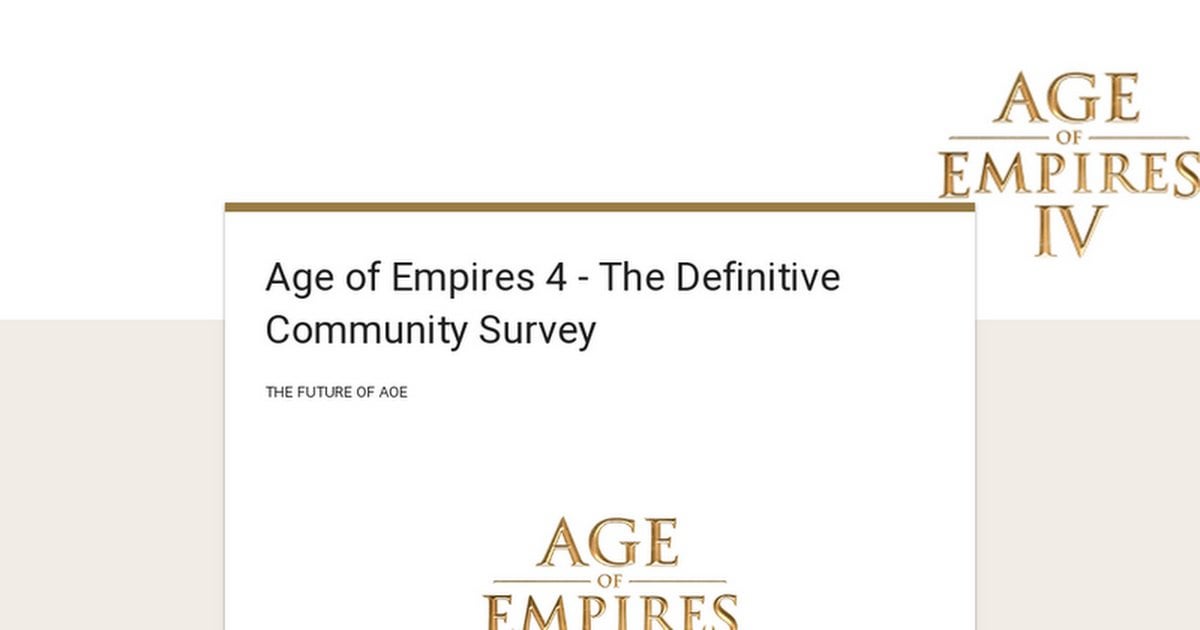 r/aoe4 - Age of Empires 4 - The Definitive Community Survey (everyone can see...

From the interaction on social media it appears that there was a lot of interest in completing the recent Age of Empires community survey. That is a wonderful thing and shows just how much the community wants to be part of the development of upcoming titles and be kept up-to-date with how each of them are progressing.

Please take care when interpreting the results. The Age of Empires franchise is mature and the community as a whole has firm expectations on what the core experiences need to be. Please do not use the survey results as justification to remove core aspects of the game on the basis of less engagement on the survey. For example, even though there are not a lot of players who use the scenario editor on a regular basis, the few players who do use it provide the game replayability for many years in the form of custom map types, custom game modes, custom scenarios and other game mods long after active development has ended.

Instead, please look at the survey for opportunities to take the franchise to the next level. A lot has happened in the game industry since Age of Empires Online was released in 2011. Show us what we have been missing. Be creative and build upon the previous titles while keeping the upcoming games true to their roots. The community team has an awesome responsibility with this community survey and I hope you take the time to carefully analyze the results. Please reach back out to us to learn the finer details supporting our responses. Thank you for providing the community with more opportunities to be involved in the game development process.

However features that are not so popular like the scenario editor and the modding ability can always be added later and not necessarily to be included in the base game and add to the game’s budget something that the majority will not bother to look at launch. I think we should also be expecting that the active development period of aoe4 will take a long time to end after its release, at least longer than dow3

As a programmer adding the editor afterwards is difficult as the code design did not reflect the presence initially.