Maps are too big

I disagree with this I think they are quite fine to be honest but that’s my take on this.

On my side, i think that map is too litle.

Players always finish the game, buildings beside enemy base.

Every thing is just clutered all together.

The map size seems fine. Their not as big as in aoe 2

the extremely separated spawn pattern is only necessary on something like french pass where players have to be behind the mountain range. the other maps should be able to have some players closer to the frontlines and others further away

Nope, when map editor come out, I hope people can make very complicated RPG adventures with many cities and towns on the map. I want them to be even bigger, even the huge option in AoE 2 is not big enough to me, I often find it can’t fit in what I want when making scenarios.

Not to mention AoE 4 already feels a bit smaller than AoE 2 already. In AoE 2 campaigns, the map often represent a large real world region that can be quite noticable on a world map, featuring multiple walled cities, such as my favorite campaign scenario York from the Forgotten battles. But in AoE 4 campaigns I’ve played so far, most of the time it’s just one city and its surrounding villages.

Hope you are rigth about the map editor, but age of empire is known for its limited map editor.

Maps are too big, I fully agree. They are made for casuals like the Relic devs who move camera with the arrow keys. Try hitting with some archers in a 4v4 match early feudal age. The time you finally reach their bases they are already in castle age

They should separate map size like aoe3.
Standard size (smaller than now) and large size.

Then no more argument.

I’m totally agree. Bigger the map is, longger and boring the game have a chance to be.

2-2 Map are extremly big. I dont talk about the crazy size of 3v3 (ridiculous). There is in 70% of time chance thats guys turtle at Age II because they are lazy to cross the map. And that just ruin the game. So what I decided to do know is leaving. And I recommended people to do the same then maybe Relic will LESSON US.

A camping game + big fight Age IV is useless and not funny at all.

Relic should take example on what Dawn of War community did on Soulstorm. The community is only playing on the maps Alvarus, Mortalis and some others in 3-3, which are little map you are very close to the other team. Players naturally choose to play only these little maps otherwise the game begin to be toxic very early because Jacque-Henri and Jean-Vincent decided to wall-towers age II then mass artillery + cav later.

Its absolutly anoying, not funny and if you are not playing with mates you know in your team you cant coordinate to rush the other team because your random mates are scary to cross 2 miles early game;

French have the best Navy, Better than the english and nobody is shocked ? I’m french and absolutly disagree about that.

Screenshot taken a minute ago: 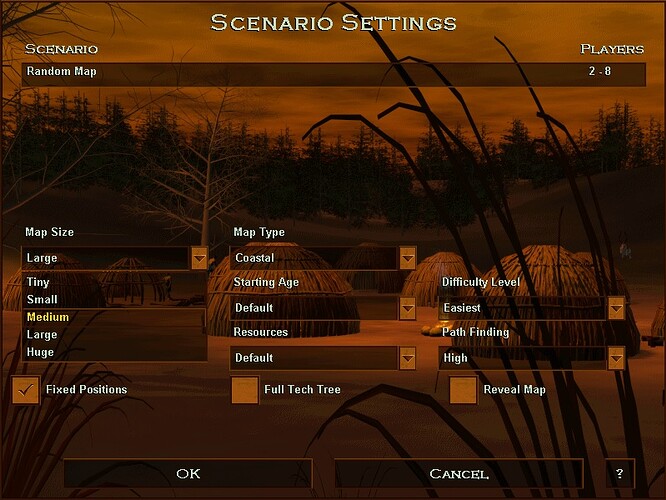 Disagree with OP. Maps are fine, I would even like a LudiKRIS size option like in Age 2.

ahh that just warms my soul to see that pic!!

Map from large and down are fine imo, I can still rush just fine in those maps. However, the Giant map size is too big, it’s impossible to rush or even come to defend your allies. If I queued up a 4v4 match in toxic maps like Black Forest, Mongolian height… people always go for wonder rush because they know they will be safe

Imo, 1v1 maps are fine. 2v2 are slightly too big, but it honestly isn’t that bad, I think it’s really close to perfection. 3v3 is way too big, games are boring, I stopped playing it because of it. I can’t even imagine how 4v4 are.

I really hope they add a ludicrous map size like in 2DE. I’m a huge fan of the large-area long games.

Has anyone counted the tiles on each map size? I’m just wondering how the area per player compares against 1v1.

Big maps is part of the fun of AOE. You can make a custom game of 4v4 and do it on the smaller maps if you want and host the lobby.