Maybe its just me but-

Hello. I am a bit confused and frustrated and sad.

I pre-ordered the game and installed it and when i wanted to run the game the game told me to update my driver - this doesn’t happen normally and when i read this is an AMD issue i was releaved cause i use NVIDIA.

But then the game told me to run the game on low settings for performance. I thought thats a joke right? I bought a mid-class gaming laptop this year with a geforce gtx 1650 ti and 16 GB RAM. so i thought mid settings should be doable. but the game lagged, fps dropped very frequently and automatic loading too the game about 20-30 seconds. i was pissed because the graphic also wasn’t that high quality on mid settings as i hoped they would be. so i lowered the settings to low all across the board.
but run way smoother even i feel now playing a 2012-14 game (beside the cool animations and physics) but it still laggs when i have more than 100 units (and some ppl complained about 200 are too low lmfao 500 would break my pc it seems)

a guy i chatted with today told me he has an amd 1050 ti and also 16 GB and he can play on ultra seetings relativ smoothly.

i was about to give the game a relative bad review

(beside again the soundwork, voiceacting, details, animations and the campagne they all are amazing but doesn’t help if the gameplay itself - the biggest part - suffers and is neither fluid nor on a quality i would expect to play on)

but before i give a review i want to ask the the ppl here and the support/devs what i am doing wrong or what the issue might be.

greetings and have a good day

Yes this game can run on a potato pc, did u try to set everything to max and then limit the frames to 90?
that might acutely work. If that dosn t work, there are official drivers from NVIDIA for this game, download them. MAKE SURE IT S ONLY OFFICIAL DRIVERS !!!
If that also not works I would require more info, but then support can help u probably better than me or someone with more knowleg .

Try going into the NVIDIA control panel and adjust the settings for this game to remove antialiasing. It takes a lot of processing power and blurs the detail together making the game look worse. (Not all antialiasing, but this game in particular)

okay will try. thx for the quick response and trying to help <3 but silly question where do i remove antialiasing xD normally its in the game settings i will look but i can’t remember. i already looked and nvidia told me latest driver and also latest directx

This is how you get to it:

Step 1: Get to the NVIDIA Control Panel 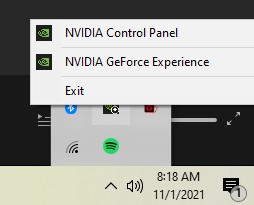 Step 2: Go to manage 3D settings → Program Settings → Add AoE4
You can then play around with image sharpening and antialiasing, and this will override the in game settings. The big problem in AOE3DE was the FXAA, and from my layman experience it’s the source of the blurriness here as well. 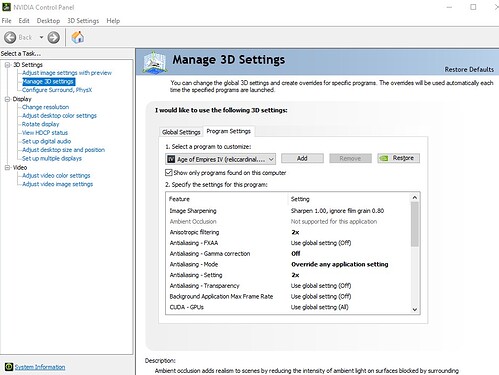 okay thanks for the pics and more detailled explanation but in the 3D settings for AOE4 every antialiasing is per default off. image sharpening too. so it seems its not the problem then i guess

As any RTS game, AoE4 is really cpu driven.
It’s unoptimized rn so it doesn’t really use more than one thread.

Which CPU are you using in your laptop?
What are your power settings in your bios?
It can help a bit to limit your notebook to a higher powertarget, to squeeze more performance out of the system.

If not possible: keep in mind that notebooks are the oposite of high performance machines.
They want to be cool, quiet and have battery power in mind, all knocking down system performance and hardware specs compared to the PC counterparts.

its unoptimized right now? didn’t know this but seems like it.

more than one thread? i am sorry i just wanted to get this solved as quickly as possible.

your explenation about laptops is new to me but makes totally sense. but i couldn’t effort a high mid-tier performance machine/PC. and i thought RTS will do since some told me they could run AoE4 without issues even on high graphics on older pcs with lower settings than i have. but i didn’t know laptops are so much worse. so it seems a mid to high tier laptop is as good as a low or aged mid tier gaming pc. interesting.

but at least low settings should run really smooth and mid settings without big issues in my honest opinion.

at the moment i wrote her, the support and on discord. discord was the most useless experience so far. this here is the quickest and best conversation i had to so far.

Try to enter the bios on boot (clickspam f2/f12/del on boot) and search for the powertarget setting for your cpu.

On lenovo notebooks it’s under configuration > System performance mode.
There you can unlock different powertargets for your CPU to give it more headroom.
In my instance it’s smthng like 10-15-25 watts depending on the setting of “battery saving/intellegent cooling/extreme performance”.

Keep in mind, you might want to change that back if you unplug your notebook from the wall, since it is more taxing for your battery.