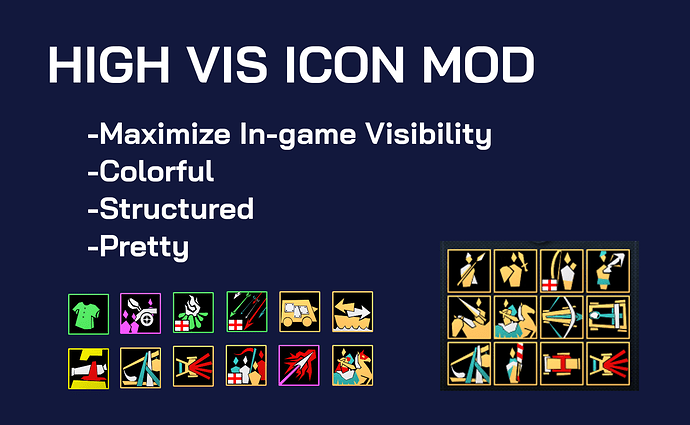 Hello! I been working on a mod that will eventually override the UI. The main goal is to improve visibility at the expense of prettier icons or HUD size. I am currently looking for feedback.

“Part One” is meant to correct a lot of the issues I have with the current Icon pack. The monotone golden icons are quite beautiful. When looking at them up close, you can appreciate all the work that went into them. However, this art design choice sacrifices visibility and readability of player actions in the game. This impacts both the gamer’s experience as well as the esport fans. 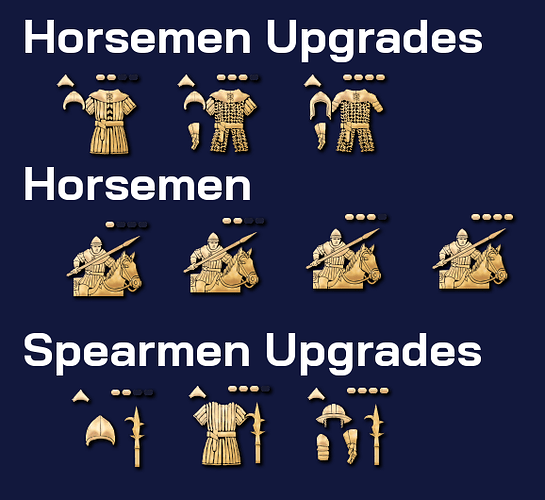 Design variety is also limited, and I suspect that’s one of the reasons we have so many composite Icons (Icons that are a mix of other symbols or icons) 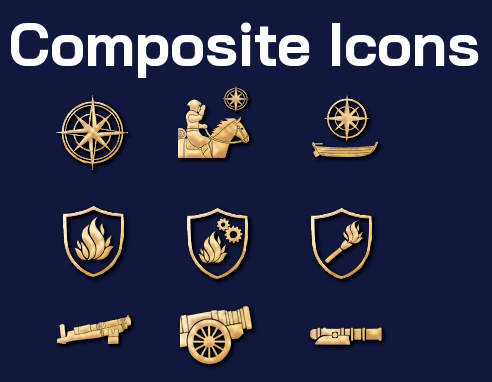 There’s also some great examples on good design, that I’ve managed to translate. And some that I might never get to redesign due to the more simplistic art style I’ve elected.

The core art design of my mod is working with colors and contrast to improve the visibility of the entire HUD. Using black as a background with negative space of background colors for unit representation.

First, Each Icon has an identity with what it’s meant to do. 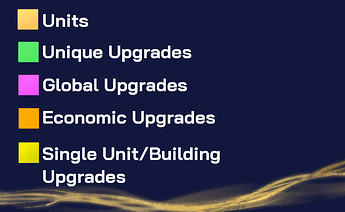 Then we can add colors to the drawing to differentiate between age technologies/units. Ideally as I improve the icons, castle upgrades should be colored with cyan only and imperial with red only. Mixing only white and the background color giving a contrast in design where castle looks cold and imperial looks warmer.

Ultimately, one should be able to easily associate icons to units, ages and function.

There’s much work to be done yet. I’ve published an early version of this Mod on the PUP under the “High Visibility Mod” name. It only works for the English and you can already see that I’ve replaced the “unique flower” decorator with an English flag.

I’m also looking for caster and pro players that could comment on possible improvements.

I think for a color blind dude it’s unreadable. Currently the dots in the corner of the icon help much more to understand the technological level / progression

In other AOE we don’t have tier indicators , we have different techs to upgrade certain troops , in here is the same.

Or that is not what are you saying?

Ultimately, one should be able to easily associate icons to units, ages and function.

I’m saying for a color blind can’t see the differences.
Accessibility must always be something kept in mind in the modern era. If dots were added vertically to the icons the progression would be much clearer.

But this is a mod , clearly minded for people who want visual clarity , ranked games etc.

It’s obviously not meant for color blind people . And even if it is an accesibility mod , it’s not a work from World edge and it just Fan Made , there is no need of making the mod for colorblind people .

The encoding is great. But from personal experience (with similar attempts to encode) … no one will care and decode while using it.
To remember 40+ icons is quite easy. But encoding is overkill.
For example: Chu-ko-nu is already unique unit… and if icon is recognisable, player already knows that Chu-ko-nu is unique)
For me global queue is mostly mix of colors, not the shape or the whole picture. especially on small screen

anyway, great job.
it’s just opinion and the best part of mods. People will find/make smth they like.

You are correct. My intent for this mod is to eventually include everyone. MAX VIS for EVERYONE is the goal.

In an ideal world my mod could be hosted on a website, where you can tailor it to your needs. Here you will be able to choose from: