I had just painstakingly unchecked all checkboxes for mods I did not want checked in my Installed Mods list. (Many of them event decorations for Town Centers, and things like shooting flower arrow. I didn’t know half of the checked ones are ones I had checked. But it’s been a long, long while since I’ve played AoE2:DE, so I maybe forgot, or the game auto re-enables stuff with each new patch.)

Regardless, I went to other tab to subscribe to “Dark Terrains Mod to Reduce Eye Strain”. (Had to do this because doing so on the AoE website the other day didn’t make it show up in my in-game list of subscribed to/installed mods for some reason)

Went back to my list of subscribed mods, clicked the checkboxes at top to try and filter my mods list and/or see what those buttons do (I assumed they would filter the list), but they didn’t seem to do anything. That’s when I noticed all mods in my list were unchecked

So, I had to re-select the mods I wanted. I don’t know what wiped away all my checkboxes, but I thought it was clicking those checkbox filters at top. It may have been a combination of the steps I gave, though.

Have my mod list filter based on the boxes I click at top. And most of all, for it to NOT de-select every mod I had selected. 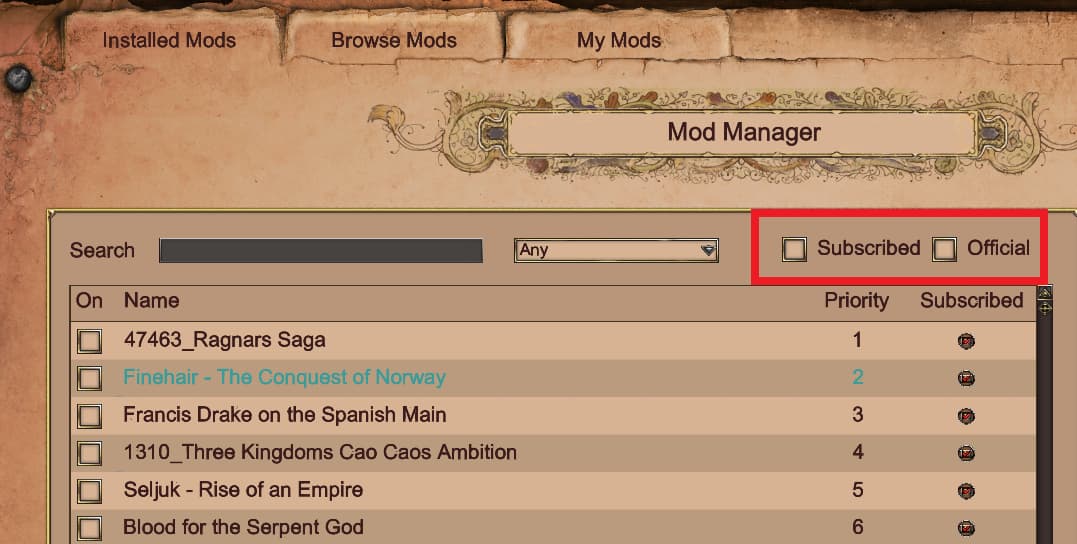 We are tracking an issue with mods autoenabling, and a few days ago with had a server side issue where the mods got unsuscribed by themselves.

When I opened my Installed Mods list yesterday… which was my first time in months or a year… several mods were already selected. (So that server side issue didn’t unsubscribe me from anything – except maybe the Dark Terrains mod that I had initially tried to subscribe to via the internet page?) I then went through the motions of de-selecting the ones I didn’t want (as described above) and proceeded with the other steps I mentioned in OP.

If there was another server side issue yesterday, I’d find it highly coincidental (too coincidental) to happen to occur at some time during the 60-second span of time where I downloaded the mod and clicked the filter buttons