I started a ranked game, realized i had no mods, finished game → checked mods if activated, they were (but i guess they where gone at that point), restarted game, mods where gone. Tried to install them and restart game like 5 times again and still didnt work. deinstalled game and reinstalled, tried again, still doesnt work. 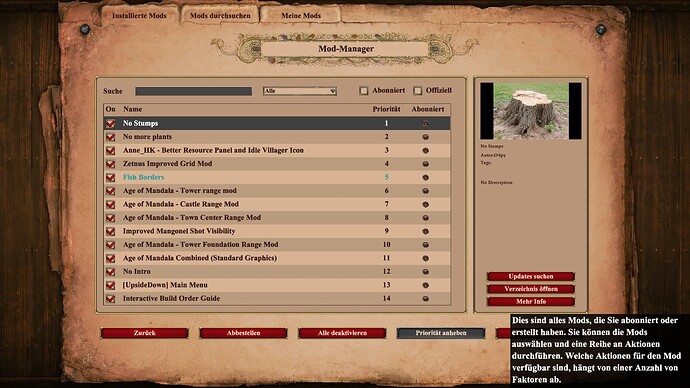 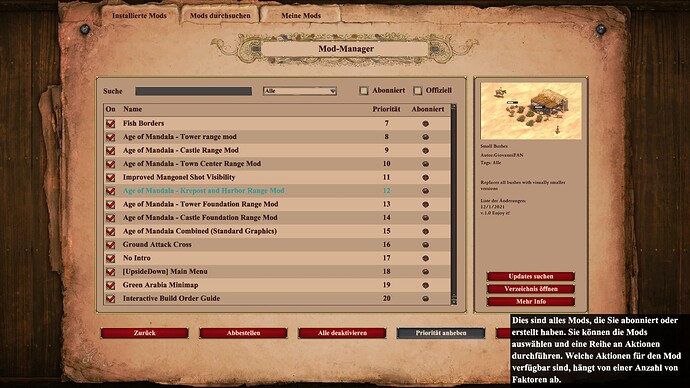 same problem here, it is always up to 10 mods, and then it stops deleting them
there seems to be a another post covering this as well

I have the same problem. Why one update that doesnt gives us nothig ussefull just broke the game? I can’t believe it.
I hope a hotfix quickly to this and not 1 moth or more to solve it.

Same thing happened to me. Opened the game and about 10 mods missing, opened again and another 10 or so mods gone. Not just unchecked but completely gone. Can’t play without mods, hope the devs respond to this soon.

I solved this problem like this. subscribed to mods again and without leaving the game transferred files from the subscribed folder to the local folder

We’re investigating this issue, in the meantime, as @Bpuko said, I recommend you to do a temporary fix.

Before you launch the game, please make a copy of mod-status.json file, this can be found here:
C:\Users\YOUR_WINDOWS_USERNAME\Games\Age of Empires 2 DE\YOUR_STEAM_ID\mods\mod-status.json

I think I have the same issue, looking at my “subscribed mods” on the website there are only a few of the mods i used to have left in the list.

This may have something to do with unlocking new mods from challenges. I had a weird thing happen yesterday where I tried to do the “kill units with petards” challenge and after the game the popup came up for the unlock and i could subscribe to the mod but the challenge was still not fully completed on the right side in the main menu.

Actually none of the mods in my subscribed mods on the website appear in the mod list in-game.

Hello @Felizon89, I have experienced the same issue but the mods I have left total 31 as opposed to the 100+ I had before, even if I move the mods to the local folder which is no problem, how can I get all the mods back that I earned over the years from the different monthly events?

Can you contact @DodoNotDoDo ? I believe he’s able to restore them for you.