It could be fun if monk can convert wolf, dear and boar. It more fun than useful.
You can for example scout secretly with a dear.
It s useful as the bird who fly or animation of collapse or have different skin for dear.

It could be fun if monk can convert wolf, dear and boar.

Dear and boar are units which are used to gather food, there’s no good consequence of losing like 300 food with a boar converted and unable to be eaten.

About the wolf, there are controllable wolf units in campaigns and scenarios but in a game I think it would ruin the fun since 1. Wolves are aggressive toward non-scout and non-monk units and you cannot even use them to scout.

Welp in Castle age there are usually no boars left and wolves are so bad they wouldn’t even be fun to use 11. Of course that’s not why you want this change but if you use the “natural wonders” cheat code to control Gaia you will notice than grouping several animals and tasking them will often result in none of them obeying, and devs have better things to do than fixing that.

What we need is actual dogs as units, not wolves. Dogs were used as hunting animals as well as war beasts…

+1 for the dog idea! maybe train them from the tcs and mills? lol

In the reallity, the Monks can NOT convert wolves , dear or boar. People may only eat them.

Until now the most Broken thning in the game is “Scouting with sheeps”. It is absolutely fictional. People may send letters using dogs, or birds. But they can not scout using with animals.

Welp, a sheep walking in a straight line longer than 2m with no one to guide him is also completely unrealistic, it’s to make the game easier.

It’s not a fiction, you can educate a wolf.
And it’s base on history, in the middle age dog was everywhere, pig was really common.
dog = wolf and pig = boar.
All kind of animals play in kind of circus (go in different caslte to show annimals)
And the link with monk : francois d’assise “talk to animals”
Wolf in france are still use for hunting (hunting with hounds). Not the kind of wolf you can find in forest but half or quarter wolf.

For more explanation:
Historical link:
François d’Assise was a kind of monk who talk to animals. 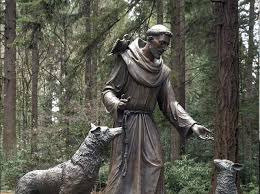 To beleive this story is point less as monk can convert object in AO2.
The fact that wolf can join you team is normal and a part of the history. Human domesticated wolf a long time ago. For hunting and war, wolf was used. And still today half-wolf are use for hunting. During “chasse à coure” kind of hunting where dog or half-wolf do all the work (find animals and follow them until the animal is tired). To be able to convert animals will be like an easter egg, it’s fun and won’t change anything to the game play.
Boar was domisticated quite late compare to wolf. Dear wasn’t domesticated and was in kind of really small zoo where you can see alive animals.

We kinda had that but then got taken out, it was a research in the mill, I think the name was “hunting dogs”