I was playing 4v4 Multiplayer game on a random map( i think it was hideout) Anyway i started the game but to internet issues, the game started kinda late for me. Everyone was up to Castle Age and i was still stuck in Dark Age. So seeing it as a hopeless game since there was no way i could win, i clicked on ‘Quit Current Game’ and exited the application. Now after a few minutes I decided to give it another try. So i opened the game again and Viola, i couldnt believe what i saw
So if i lost a game and it was ranked my ranking must go down and the number of losses must increase by one right?
Well that didn’t happen
Instead it showed that i WON the game and not lost, and the number of games i won was increased by 1. (Now you might say i might have been wrong but mind you i had 99 wins and i was desperately looking for my 100th one. And i had 124 losses. Imagine my surprise when i saw 100 games as won).
My rating was also increased and my ranking too, i didnt know how it could happen so i restarted the application. Even then it showed the same

What was SUPPOSED to happen if the bug you encountered were not present?
I was supposed to lose my ranking and my rating
The stats should have been, 99 wins and 125 losses 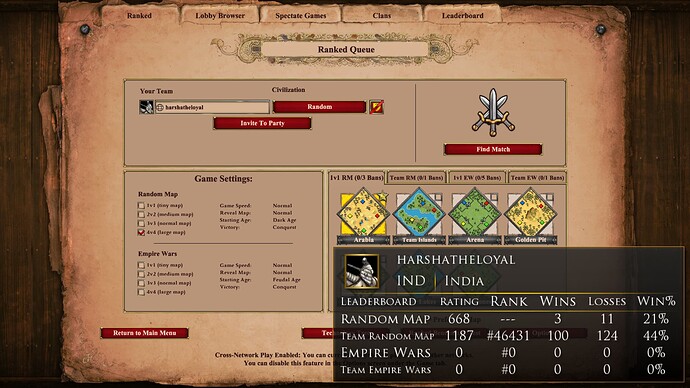 Maybe your team won without you? Any devs that can confirm if it is like on Voobly where when you resign you lose elo no matter if your team wins the 3v4, or if its always a Team win?

Yes, if your team wins, you get the win, even if you resigned during the game.

So the team may have won 3v4. Especially at that elo level, it’s quite possible.

They won without you, you can download the game to confirm it on aoe2 dot net>rm tg ladder>search ur nick and last played matches.