Here I will share some of my Hindustanis nerf ideas. Remove halberdier (they have good camels, they don’t need halbs and it will nerf their late game with trash wars) and siege engineers. With the siege engineers gone, siege civs can hard counter them much better. That would give them a clear weakness, even then, they still have Hussars. Gillham is far too cheap, make them more costly, they super great archer slayers. Or maybe nerf their stats slightly.

Or maybe simply give them a normal darkage with no villager food bonus. Have to reach the feudal age to get their cheaper villagers. That will slow them down a bit, and give a rush-civ a opening to kill them early.

They seem to be good at everything. No holes in their tech tree. Look at these key units. Good vs infantry (super hand cannoneer) good vs cavalry (awesome camels) good vs siege since they have siege engineers and Hussars. And good vs archers with the Gillham. What is their weakness?

Or maybe simply give them a normal darkage with no villager food bonus.

i think this is the issue, i dont think its the best idea to have such a stellar eco, and the best counter units (who also happen to be fairly good all rounders)

i think the civ retains more flavour by nerfing their eco, as opposed to nering their counter units. i agree ghulam are probably too effective for their cost though. but their camels are also incredibly good, because they’re much better generalists, ie you can over invest into them and not be punished as hard, as opposed to other camels

I just proposed removing elite skirmishers and that will make players to rush out Ghulam to compete vs archers, but seems not good, they need halbs to counter camels in mirror matches.
And nerf Ghulam blast radius thrust damage from 50% to 33%, and food cost rasied from 30f to 40f.
Removing Siege Engineers is irrelevant vs siege.

they need halbs to counter camels

what do berbers , turks and gurj use then?

what do berbers use then?

And nerf Ghulam blast radius thrust damage from 50% to 33%

i think this is already decent, if you’re nerfing their eco, not sure they also need a 33% food increase

byz H camels (the only other civ with halbs and some sort of camel bonus) are actually pretty average (even factoring cost) because at that stage pop efficiency starts becoming a thing. and now you have a fragile, weak H camel, that is literally only good at one thing

the dont deserve halbs as well

byz H camels (the only other civ with halbs) 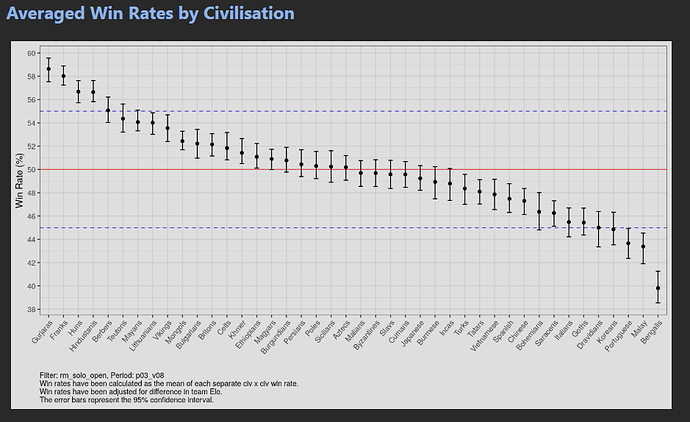 winrates939×575 68.2 KB
Gurjaras and Franks probably need nerfs, but Hindustanis…I don’t think so.
Not unless you think Huns should get nerfed too.
I mean, ok, if you think that they really should be nerfed, let’s nerf them, but not before the other 3 civs.
At high level they’re behind Gurjaras, Franks and Mayans too, tied with Vikings at the fourth spot.
2 Likes
FurtherLime7936 July 28, 2022, 4:42pm #10

How bad would Ghulams (Ghilam plural?) be if they removed the thrust damage entirely?

It’s one of those things I feel is just kinda unnecessary bloating, they’re already comparable to Elite Eagles in their function vs Archers (better even, with higher hp and bonus vs archers). You could argue they’re too similar to Huskarl then, but the key thing for Huskarls is being made out of Barracks and they have bonus against buildings on top, while Ghulam moves faster.

IMO if the Ghulam loses the thrust ability, they’d still be really good vs Archers. If the thrust matters that much, then removing it would mean they’re not as oppressive.

The thrust ability can then be added on a new unit that perhaps is just fast moving, and it’d be more unique as well?

Check those confidence interval bars, they’re like 15-20% wide, it means the sample size is really tiny, so really not that meaningful.
Also naive rates vs averaged rates, still not sure which one is better but for open maps >1700 ELO I get a different graph which is this 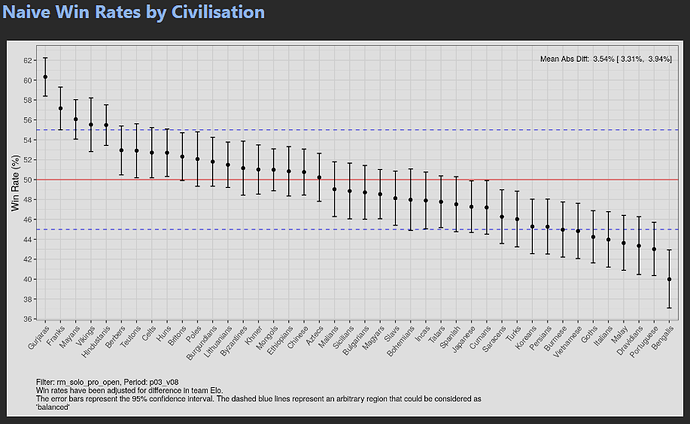 , not sure where you got yours.
However, again, if they’re nerf worthy, then nerf others in line before them, but if you nerf just Hindustanis, what do you think will happen?

IMO if the Ghulam loses the thrust ability, they’d still be really good vs Archers. If the thrust matters that much, then removing it would mean they’re not as oppressive.

Removing the thurst damage would just make Ghulam a Huskarl clone (harder to mass because of castles, while Huskarls can be made from barracks after UT), nothing more.
Just reduce the damage and is fine.

, not sure where you got yours.
However, again, if they’re nerf worthy, then nerf others in line before them, but if you nerf just Hindustanis, what do you think will happen?

And how many times you see me (and others) being vocal about nerfing way older civs for other maps and overall? Franks, Turks, Poles, Mayans, Chinese, Vikings, Britons.

And how many times you see me (and others) being vocal about nerfing way older civs for other maps and overall? Franks, Turks, Poles, Mayans, Chinese, Vikings, Britons.

Good, keep asking then, maybe one day the devs will listen.
Said that, no nerfs for Hindustanis are needed in my opinion until those civs are dealt with.
This is obviously my point of view worth of 1 wood in imperial age.
Bye

I mean, if you just nerfed the damage then Ghulam will still be a Huskarl clone with mild spice.

Besides, they’re more like a Throwing Axeman and Gbeto type clones, Huskarl is slower (and has bonus against buildings), Ghulam is faster.

If you actually wanted to differentiate the Ghulam from Huskarl, I’d reduce their PA instead.

If the thrust matters that much

Seriously though, I agree that Ghulam is overtuned. I like it having a different mechanic to differentiate it from Eagle Warrior/Huskarl, but think it should lose either speed, HP, or PA so that it’s less of a jack of all trades unit.

I love these graphs. Because I love how it disapproves that franks are “only dominating at low elos”

Regardless of which one we look at, franks are near the top😂

Give the berry bonus to port and be done with it

To be less of a jack of all trades it needs to lose damage. Any of these listed will make it a worse archer counter.

Someone else suggested TT. I think that’s good as well

Despite word changing this is still false because Chinese have a bonus for BOTH units in a tech discount.

Sadly, the next patch will nerf Gurjaras and Hindustanis (even maybe Poles and Bohemians) but the Franks and Mayans will remain

Do we know when the next patch will come?