Nerf caroleans? A little too absurd?

Agree, they need a cost nerf so they can’t be massed like that, they’re too strong for a 100-resources-cost unit, or nerf its melee attack by a little.

only Horse Cannon have chance vs them…

Uhmm I’d have to see how they fair vs skirm mass that have better multipliers than bowman against HI to be convinced.

I’ve already seen caroleans surrounding skirms and skirms not being able to do anything. I’ll try to get a good fight and post it here

Thanks that’d be cool! Also with the same amount of resources at each side to make it balanced (and with a fair amount of distance between them to give skirm a chance where they shine too)

man, caroleans are made to kill musketers meele, so you have to use longbows
culverin (to kill cannons) and longbow tahts all you can do
if that doesnt work, nothing will

man, caroleans are made to kill musketers meele, so you have to use longbows
culverin (to kill cannons) and longbow tahts all you can do
if that doesnt work, nothing will

You got it all wrong. Longbows can’t kill caroleans
Here is more proof. And I have to say, No other musk in the game does this to their counter

sweden has broken unit and econ

When you see everyone picking Swedes and only building one unit, how can it not be extremely obvious that there is a huge balance problem still? We don’t want to play a game where someone can just spam one unit only. It sucks, its boring, and it makes even watching tournaments less fun. I was watching ESOC, and everyone picks Swedes then Japan when they can. Of course whoever picks Swedes unfailingly wins, because no one can counter the massive unbalanced Swedes, even the commentators mention it. Japan seems pretty unbalanced too, uber eco, uber units, able to send some cards twice, able to easily shrine boom all over the map while the shrines are much harder to locate and destroy versus building them. I don’t get it, what is the weakness of Japan?

I don’t even see how there is any question. It is a statistical fact that Swed players tend to build only the one unit, and win games they shouldn’t against higher skilled opponents.

Caroleans are indeed too strong, but if I was to nerf them, it would be the HP.
They are supposed to be a versatile counter-all (counters Cavalry at a distance, counters Infantry and Artillery in Melee), like a mix between a Dragoon and a Samurai without splash damage.

This is OK, because Swedes got very little unit choices, but they should have to sacrifice some survivability for how versatile they are, so they can at least be countered by Skirmishers and Archers.

Thats right. And this is AFTER the first balance patch released just a day or two ago. When watching ESOC, inevitably you see a huge mass of Caroleans running at and overwhelming the opponent, who is always making whatever he hopes will counter them from the beginning of the game (because Swedes rarely make any other unit). So, despite relatively equally skilled opponents, and the opponents making only the unit counter(s) (are there any?) the Swed player inevitably has a greater mass of Caroleans, and inevitably wins. Its really terrible. Reminds me of Steppe Lancers when AOE2 DE first released.

They need a HP nerf that Forces Swedes to have to combo them with Pikes against Cavalry, or Leather Cannons against Infantry.

i just wrtie in teory by bonus damage, but come on how do you want to kill caroleans if longbows are just running, longbows are very weak, ive not played much but with russia strelet can hold them, but close combat is really good, they are very fast
on your video there are 18 caroleans versus 16 longbow come on lol, make a better even battle
speed is shown on stats, why running of something faster than you?
did you see that a longbow running while being atacked slows down its speed? come on bro, show a video where is a real fight at least, with a player that know how to use units

on your video there are 18 caroleans versus 16 longbow come on lol, make a better even battle

16 skirms eat 18 musks. You don’t win a fight by standing. have to try and kite. Caroleans in melee will destory anything they touch

even 16 LB can kill 18 musk by shooting and going back. I have done it

Give them a negative multiplier vs skirmishers in mele mode

Give them a negative multiplier vs skirmishers in mele mode

They already have 80% of their damage vs them. 0.8 but they still do alot

they are not musk!, read stats then play as those stats
u cant run, i told u
no more comments
i would repeat what is told you

im ok with a nerf though, i dont like sweden civ

they are not musk! 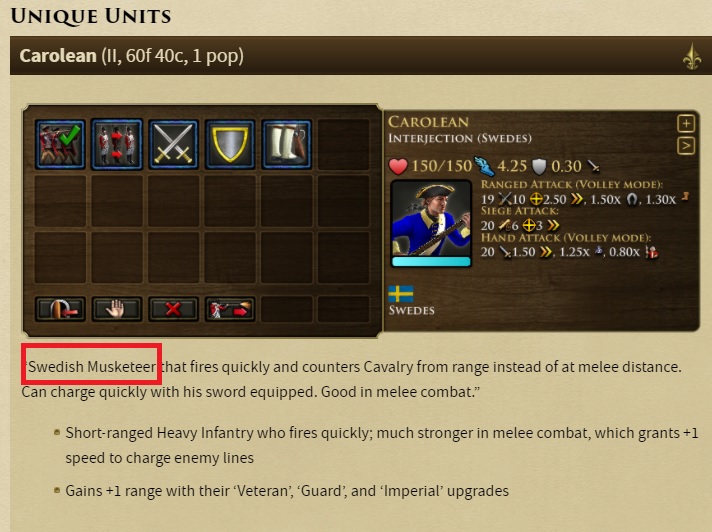 Before playing lots of brits. I used to play lots of russia and I would lose strelets the same way I lost Longbow in the video. Caroleans are too stupid with that speed and it is a little bit too much despite the fact that it is only +1. Due to that speed they’re able to choose when to fight and get out of all bad fights yet wining any they want without any fear of counter